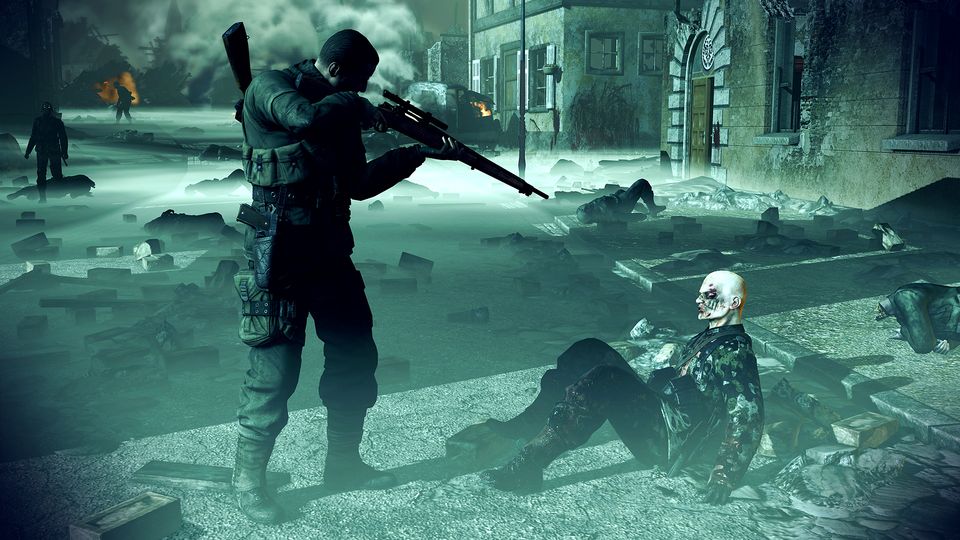 Sniper Elite: Nazi Zombie Army is a standalone PC expansion to Rebellion’s Sniper Elite V2. The game is set near the end of World War II, Hitler and his Nazi’s are surrounded and it’s only a matter of time before the Allies deal the final blow. The game takes a different approach to the real course of the war though as Hitler is left with no choice but to enact Plan Z. He calls upon the occult to raise an undead Nazi Zombie Army in a last ditch attempt to turn the tide of the war.

Nazi Zombie Army features a co-op campaign spread across five chapters and each of these will take you around an hour to play through. The game is designed with co-op play in mind so for the best experience it’s highly recommended to team up with 3 friends to tackle Hitler’s zombie horde. Should you wish to go it alone you can also jump into the campaign in single-player.

Unlike Sniper Elite V2, stealth is out the window and action is the order of the day. You carry a sniper rifle, machine gun and pistol as well as other items such as grenades, mines and trip-wires. Ammunition is fairly scarce so you need to scavenge your kills for more until you make it to the next safe location.

The game actually plays most similar to Left 4 Dead. The key to staying alive is keeping an eye on all directions so you know where the zombies are coming from. You need to constantly move around the environment to ensure you don’t get swamped. It’s best to take zombies out from range with your sniper rifle. When they get in close you can feel the panic setting in and it’s time to swap to a closer range weapon to clear a safe path through the mob so you can sprint to a slightly safer location. The close quarters combat doesn’t work as well as the ranged and can be quite frustrating at times.

The game adjusts the difficulty based on the number of players but it’s still a lot easier to get overwhelmed in single-player. With friends it’s possible to spread out to take zombies out at range from multiple locations. It’s also useful to have one or two players roaming to keep the zombies busy and mop up any stragglers. In co-op you can also revive each other.

There’s a nice variety to the zombies including slow shambling walkers, fast skeletons, zombie snipers and incredibly fast moving suicide bomber zombies. The game does an impressive job at throwing crazy numbers at you at once so you need to make every bullet count. The movement of the zombies makes your sniping job that little more difficult as they constant bob their heads about. Occasionally a zombie will also spring back to life just to keep you on your toes.

Everyone knows the best way to kill a zombie is to go for the head to kill its brain. The headshots in Nazi Zombie Army are particularly satisfying and the game rewards you with more score based on where you hit and what range you were at. Like the previous game the superb x-ray cam is present which showcases your better shots in glorious slow-motion. Here you can watch the bullet leave your gun and then as it connects with its target an x-ray view details just how devastating the damage was. You can watch skulls crack, bones break and vital organs explode. It’s incredibly gruesome but strangely addictive and it gives you a welcome few seconds break from the madness.

The game can be played with either a standard mouse and keyboard setup or with a controller. It plays well with either option so it’s all down to personal preference. One bonus of the controller is the added vibration support.

Sniper Elite: Nazi Zombie Army is a decent game and not to be missed at its budget price of £10 if you’re a fan of the genre. It’s fun in short bursts solo but an absolute scream with friends in co-op and the sort of game you’ll come back to every so often for a few rounds of zombie slaying.