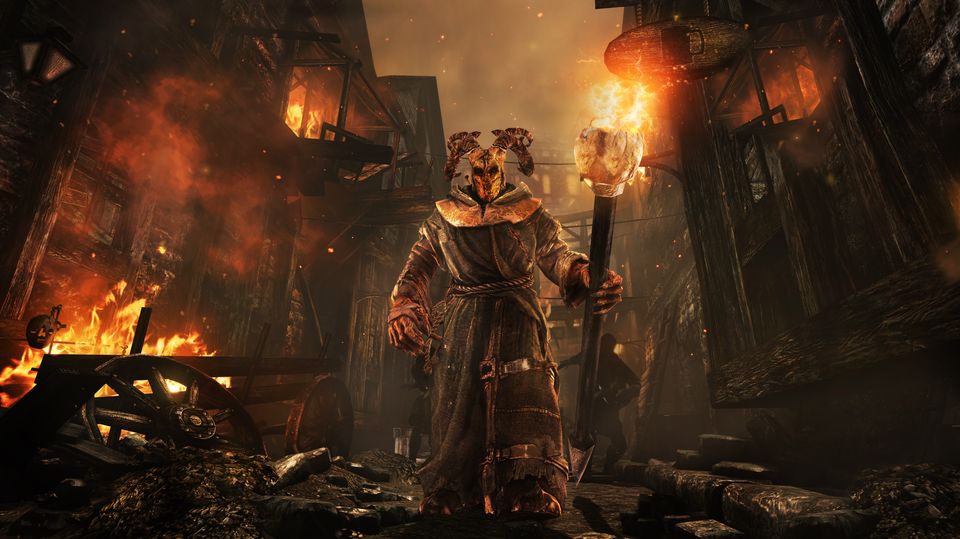 At the end of last year we reviewed Painkiller: Hell & Damnation which was a remake of the 2004 Painkiller game. The remake was developed by The Farm 51 and published by Nordic Games. Although we enjoyed the core gameplay and were impressed by the updated visuals we were disappointed by the multiplayer. The multiplayer seemed buggy and there was a lack of anyone online to play against. We scored the game 6/10.

Since launch the developers have been hard at work on improving and expanding the game with patches and DLC. So far there have been two DLC packs released and The Clock Strikes Meat Night is the third which focuses on single-player and co-op content. It’s great for fans to have a choice of a variety of DLC content to choose from and the developers are promising another five packs throughout the year.

The Clock Strikes Meat Night pack contains a variety of content. First up is one new map called Town which is a remake with rearranged combat and new enemies that spawn. Two other maps, Bridge and Asylum have also been expanded with extra content. Asylum has a brand new underground sewer section which is as big as the original map and there’s a new mirror maze section which is a lot of fun. On Bridge there’s a new large winter town set in the World War II era along with a new boss fight and extra gameplay mechanics.

In addition to the levels the DLC comes with a bunch of brand new enemies such as the Leper Monks, Ninja and Loki. A cool feature of the Leper Monks is that once dismembered you can charge up their heads with your Soul Catcher to use them as Meat Mines.

A new Tarot card called the Health Stealer has been added which allows you to leech the life from your fallen enemies. There is also a brand new dual-wield power-up which gives you a second weapon to match the one you are carrying. With the crazy weapons already on offer there’s not much cooler than dual-wielding Stakeguns.

If you enjoyed Painkiller: Hell & Damnation in single-player or co-op then the Clock Strikes Meat Night DLC could be the reason you’ve been waiting for to head back to Hell. The game remains fun for fans of hardcore shooters but if it wasn’t your cup of tea last time there’s little here to change your mind. The Clock Strikes Meat Night DLC is available now for £5.99 and requires a full copy of Painkiller: Hell & Damnation in order to play.