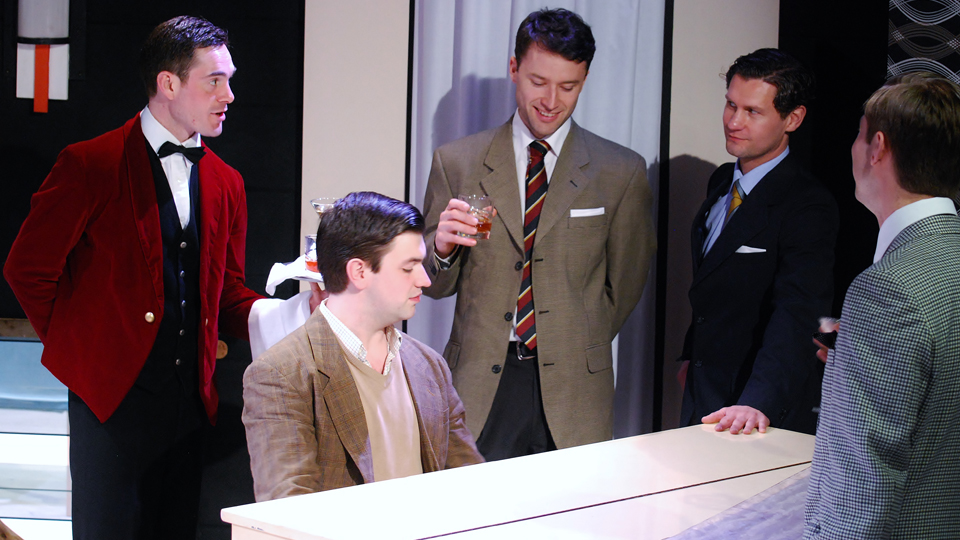 Making Dickie Happy, which runs at the Tristan Bates Theatre until the end of the month, sees crime writer Agatha Christie escaping from her failing marriage and cheating husband by staying alone on a remote island hotel populated by Noël Coward and his entourage of gay and handsome young men. It just so happens that Louis Mountbatten (the titular Dickie), spending his shore leave with a good looking young sailor, has come up with the best idea ever for a murder mystery. Yet it’s his impending venture into married life that sparks the drama.

Jeremy Kingston’s writing is bright, breezy and witty; and the dialogue is an especial treat. It’s also a thoughtful piece: not a great deal happens, yet most of the characters’ lives are changed irrevocably after their weekend together. The play comments about love, friendship and the nature of companionship, but without ever hitting the audience over the head with a particular point of view. The lightness of touch and the theme are perhaps encapsulated in the delightful double entendre of the title.

The contrasting personalities of the three principal characters sustains a great dynamic that is reflected in the performances. It’s the conservative Agatha who’s at sea on the gay paradise retreat where the visiting men queue up to flirt with Cyril, the waiter.

The aesthetics of the piece are wonderful, thanks to the vividly recreated 1920s setting, from the Art Deco-style set to the sumptuous costumes. An endless supply of Cyril’s luminescent cocktails and cigarettes ably capture the last few years of the upper social echelons’ decadence.

For the most part, the pleasure of the play derives from the rapid and verbally dexterous exchanges of witticisms. The abrupt change of pacing at the start of the second act takes a while to adjust to. The often busy stage of the first gives way to a calm evening setting where Coward and Christie have the stage to themselves for some intellectual sparring.

Helen Duff as Agatha and Phineas Pett as Coward. Photograph by Cioban Fana.

Director Robert Gillespie brings out the best in his cast. Helen Duff’s Agatha exhibits much inner-strength. She keeps Agatha restrained and dignified, but she’s never cowed by the often-brash Coward, revealing her resolve through smiling politely whilst bravely maintaining eye-contact. This helps Phineas Pett’s Coward to sharpen the barbs of his words as he works harder to prove his intellectual superiority. Despite his roguishness, it’s impossible to dislike Coward as played by Pett, partly because it’s easy to forgive anyone who makes you laugh, and he’s hilarious throughout; but also because he finds moments to reveal Coward’s true feelings. The sadness of the character is that Pett leaves us in no doubt, through showing the chinks in the armour, that the bravado is all a mask.

David Alderman as Tono and Phineas Pett as Coward. Photograph by Cioban Fana.

Pett’s flamboyance is counterbalanced by James Phelips’ bluff, militaristic and straightforward Dickie Mountbatten. A less obviously showy part, Phelips nevertheless earns his share of laughs with great timing that almost always reveals Dickie’s inanity (he hasn’t just had a great idea for a crime thriller, but the greatest idea anyone has ever had), at the same time creating a character we care about.

The supporting actors are no less commendable. David Alderman’s Tono, Coward’s latest boyfriend, is enjoyably flirty. It’s a shame there isn’t more of him in the second act, though when he does reappear, his scene with Pett (at the risk of hinting towards spoilers) is superbly underplayed, and rewards the audience with a nuanced emotional payoff. Matthew Alexander’s young sailor J-Boy adds a touch of youthful innocence against the anxieties of the principals; whilst Rob Pomfret’s Cyril is an unceasing joy to watch. His arch glances add greatly to the comedy, and his deadpanned double-entendre about a weekend with a sailor (listen out for it) drew one of the biggest laughs of the evening.

David Alderman as Tono and Matthew Alexander as J-Boy. Photograph by Cioban Fana.

Ultimately, Making Dickie Happy is a very funny piece, clever and gay, with moments of poignancy and solid performances throughout. It makes for a fun evening out, and the bar of the Tristan Bates Theatre is commendably spacious and comfortable.