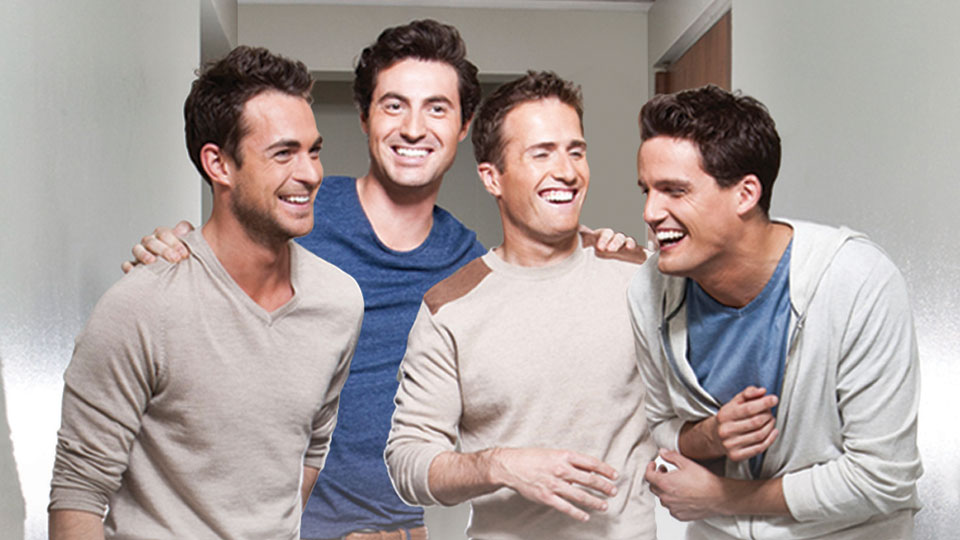 When we last saw Blake performing, it was in November of last year at their showcase in the Mandarin Oriental Hotel, in London’s glamorous Knightsbridge. Having formed in 2007, they have been on an almost constant cycle of recording, performing and touring. Blake had yet an incredible year in 2012. Their worldwide status grew as they took their music to important new territories – including the Phillipinees, China and the USA.

We were very shocked last month, when we received a press statement, saying that Jules had left the band to concentrate on his acting career and that he would soon be appearing on our screens, in Holby City. How ironic is it therefore, that their current album is called ‘Start Over’? We have been listening to this album since receiving it and here are our thoughts.

The album contains the beautiful four-piece harmonies for which they are known for, but the difference with this album, in comparison to their previous efforts, is that this album has a very distinct pop feel to it. Start Over is Blake’s first album with this sound so present on it. The change in musical direction may surprise some, but it is in fact a natural progression for a band who are inspired by a diverse range of artists, including the Bee Gees and Boyz II Men and The Beach Boys.

Their new sound is very fresh and it has a very new and mainstream feel to it, it is almost like listening to an entirely different band and we love the new sound. This is particular clear to hear on the song called Start Over. It’s totally different to the Blake of yesteryear and it’s a change for the better. They are four incredibly suave, handsome and talented young men, yet we have felt in the past that perhaps they should be reaching a younger audience – this will enable them to do that. It’s an uplifting track and it’s so great to hear them spreading out and diversifying. They could almost be seen as a ‘man-band’ with this track, rather than just their pigeon-holed territory – this track has the potential to enable them to really make their mark on the UK this year, in a big way.

Some of our fave’s on the album include their lovely version of Bob Dylan’s Make You Feel My Love. Blake’s version is incredibly romantic and they make it their own. When you see the title of the song, you may even be reminded of Adele’s more recent cover of this – but once you hear Blake’s version of the song, you see how versatile a song it is and also how it works in a number of different ways, sung by different artists. This is such a lovely version of the track.

Another stand-out track for us, is Beautiful Night. Beautiful Night is a song that was written by Paul McCartney, shortly before the death of his wife, Linda. It is a relatively unknown song to the masses, however to those that do know the song, Blake again, have managed to put their spin on the song and they have managed to make their song their own and it is stunning to listen to.

This is by far the best we’ve ever heard from Blake. Each track is beautifully sung and the album makes us feel warm, romantic, happy and it is a lovely album to listen to. The album is leaps and bounds ahead of their previous efforts, as it has a lot more artistic creativity and it has a lot of original songs, some of which have been penned by some of the cream of the industry – with the incredible talent of Diane Warrren’s songwriting included on this album.

It will be interesting to see what their next steps as a band will be, now that Jules has left. Perhaps a replacement member will step in, to continue flying the Blake flag. We hope that more people get a chance to listen to their stunning harmonies, as this is a tremendous album by the band.