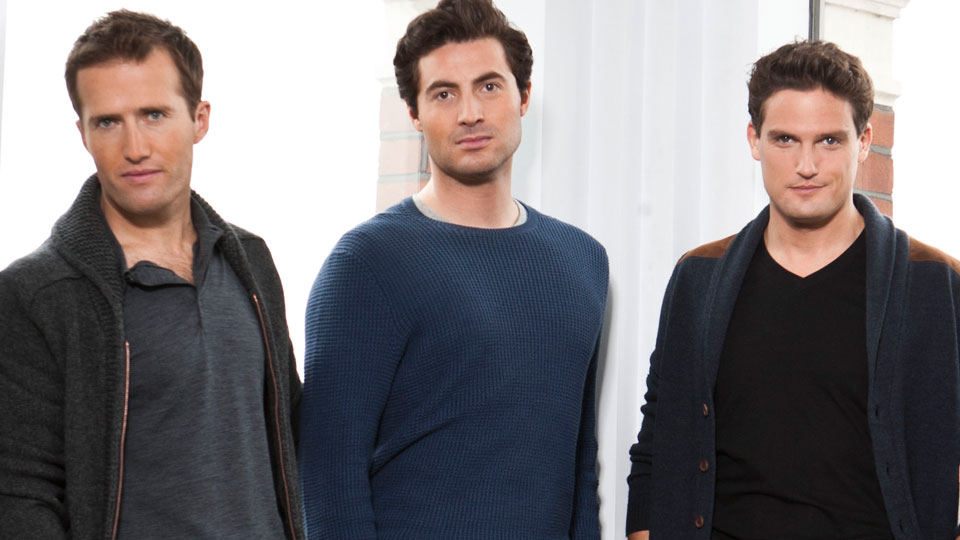 Blake are back with a brand new album release this week titled In Harmony. Having listened to the album (several times over and pressing it back on repeat), we can confirm that they are sounding as polished and even better than ever. The album features their beautiful harmonies throughout, making you feel all warm and cosy inside. The album features some guest vocalists by the likes of Camilla Kerslake, Rachelle Ann Go and the ladies of The Sing to Beat Breast Cancer Choir, who all sound fantastic and add to variety in the album.

Blake are celebrating eight years in the music industry and this is their first album release as a trio, following the departure of Jules Knight. We’re glad to see that his departure hasn’t affected the band and they’ve adapted well to the change and continued being successful.

It’s been a while since we’ve had a chat with them and here is our interview with Humphrey Berney, from Blake.

Hi Humphrey, it’s been a while since we’ve spoken, how are you and the rest of the band today?

Very well thanks! We have just finished a tour and an amazing trip to Russia, so we’re feeling good.

We’ve seen you performing at the Mandarin Oriental a few times now, which is quite a glamorous place, is that your favourite hotel to stay at when in London?

Yes, it’s a wonderful hotel. I love the Rosebury Room. It is the most stunning room and the best champagne afternoon tea in London. After that it then turns into a champagne bar. There’s also Heston Blumental’s restaurant DINNER, stunning suites, an epic spa… I could go on! It’s a very special place.

Your new album, In Harmony has just been released in the UK. What was your favourite moment of making the album?

Recording the vocals is always so enjoyable. I love singing and the recording process is great fun, hearing the song come together and our harmonies. The album launch at the Mandarin Oriental London was also a highlight. I had a pretty bad hangover the next day which is generally a sign of a good party!

This is your first album release as a trio, what as it like going in to the studio as a three piece, was it a big transition for you as a band?

The recording process was the same and we often multi tracked our vocals to give the sound real depth. It has been a big transition becoming a three but we are fully settled now and I think you can hear that on this album. The essence of Blake is still the same – to sing emotionally engaging music where the vocals are the focus of the sound.

How were the songs for the album chosen?

We all put forward a list and then go through each song, seeing how it sounds with our harmonies. They are all songs we know and love and many songs we have wanted to record for a long time.

You’ve got some guest female vocalists on the album, which we feel add a lot of variety to the album. What was it like working with Camilla Kerslake, Rachelle Ann Go and Rebecca Newman?

Being a trio allows us to work with other artists and these collaborations were a highlight for me. They are three brilliant vocalists who each brought their own sound to the songs and were all great to work with.

You also have The Sing to Beat Breast Cancer Choir on the album, what has it been like spending time with these ladies?

It has been very inspiring. Recording the song with them was very emotional. None of them are trained singers and they were all there due to suffering breast cancer. It was wonderful to see and hear how much the experience meant to them and you can hear that in the song. They are very special and brave women.

You support a lot of charities and do so much charitable work, how important is that to you?

When you have an opportunity to help charities we believe you should which is why we do so much and we always have a personal reason to work with the charities we use.

You have been displaying your Ukulele skills of late, which we hear you have just picked up. How did it come about that you learnt to play the instrument and appear on the album/what’s the story behind that?

My father in law gave me a ukulele which was just before a Blake trip to Hawaii and after that trip we starting singing songs and harmonizing. We learnt Dream a Little Dream as part of a concert for a children’s charity in the USA and so we decided to put in on the album. I think it really suits Blake and that close harmony, classic sound is something many of our fans love.

You also got married this year and we’d like to pass on our congratulations!

Thank you! I can highly recommend it. We had the most amazing wedding spread over four days on the Isle of Wight. It was boiling, so lots of swimming, beach cricket and crates of champagne. The boys were my ushers but the only Blake performance was some solo dance moves after a few drinks, so no singing that day!

As a band, you give off a romantic, gentlemen vibe – is that how you are when you’re off-stage?

I’m a hopeless romantic! It is very much part of our characters which is why we enjoy singing the songs we do so much. I suppose we are quite classic, old school romantics in many ways.

As a band, you have great banter and camaraderie amongst you on stage, which adds to the overall show.  You’ve covered Elvis’ Love Me Tender, we were wondering if we may see you three turning up on-stage in white jumpsuits?

I doubt it, but never say never! It’s normally a well tailored suit. Saying that I had a circus theme at my 30 birthday, Stephen forgot his costume and ended up being dressed a girl in fish net tights which he looked worryingly comfortable in! Watch this space..

Sometimes watching you performing reminds us of being in a rom-com, a bit warm and cosy inside, as if we are watching something like Notting Hill or Love Actually, with you guys as the stereotypical English-heroes kind of role, has anyone said that to you before?

Yes, especially when we are abroad. We are English and proud. Ollie and I have old classic English sports cars, Stephen even looks a bit like Hugh Grant, so maybe they have a point.

You’ve been around on the music scene for years now and have toured and played shows all over the world. What is one unforgettable tour, or tour memory that you have to date?

Singing at the Albert Hall – it’s an iconic venue and a true bucket list moment singing there. I’m very happy to have ticked that box.

What are your thoughts before you go on stage? Do you have any pre-show rituals?

Not really, hopefully have had a good nights sleep, hydrated and vocally feeling fit. People come to our shows to hear great singing, that is what we try to be known for so looking after my voice is key. Apart from that, make sure the suit is clean and go and give it my all.

What’s the best thing about being on tour?

Singing live to great audiences, as a musician that is what its all about.

We love your songs and love your voices. Do you plan to push harder to get more radio play in the UK, where playlists are often dominated by pop?

We always try, but it is surprisingly difficult. We often cover songs and many stations want original music even if our covers are very different/original. If you want to hear us more then tell the stations. I’m often amazed/depressed by what gets playlisted. The game and politics of the music business is a dark art! Enough said.

We feel as if you guys are sounding better than ever on this album. Our favourite songs on the album are Wicked Game, The Right Words and You Needed Me. In Harmony has so many great songs on, do you have a favourite song from the album to sing live?

Thank you, that’s great to hear. You Needed Me is a beautiful song to sing. Forever is one of my favourites on the album but harder to sing live as multi tracked our three voices and we always sing live so it would be hard to re-create.

When not touring or working, what do Blake like to do for fun?

We love our cars, we all ski, I love anything active/sport orientated and also escaping to the country/coast. I’m a country boy at heart so love space and fresh air.

We’re nearing the end of the year, what would you say has been the highlight of 2014 so far?

Making and touring this album has been brilliant and the reaction, even better. I think it the best we have made and I’m certain that people who enjoy beautiful, emotive music will love it. Getting married wasn’t bad either!

In this article:Blake, In Harmony