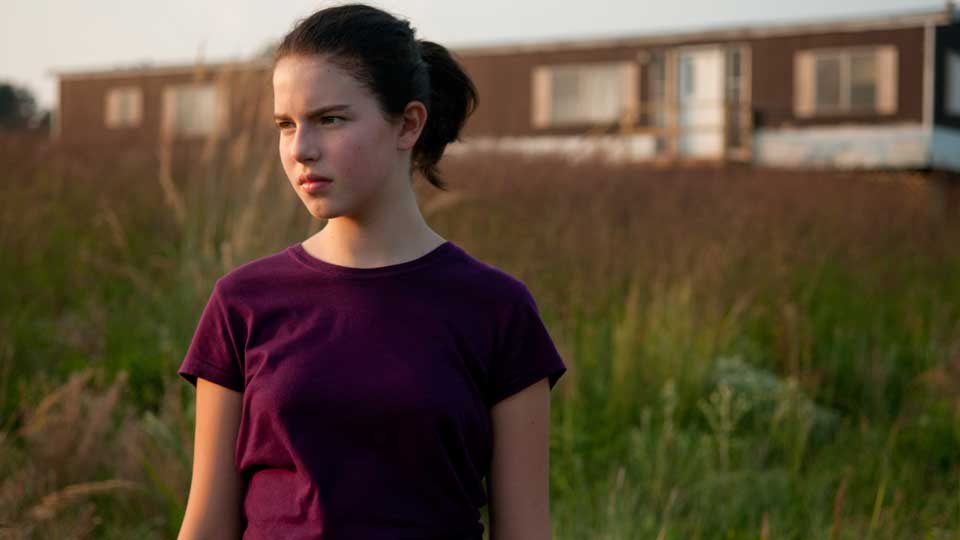 Lauduree (Perla Haney-Jardine) is left alone when her unreliable mother runs off to California to follow her dreams. Desperate to cling on to the life she has Lauduree doesn’t tell anyone what has happened and evades her feisty grandmother Greta (Amy Madigan). She throws herself into an environmental project at school overseen by teacher Ms. Markovi (Lili Taylor) as she tries to maintain some normality in her life.

Future Weather is the directorial debut of Jenny Deller, who also wrote and produced the film. The story revolves around 13-year-old Lauduree who tries to fill the gaps in her life with her love of science. It’s clear from the off-set that Lauduree is brighter than your average teenager but she channels her intelligence and passion to distract from the disappointment she feels over being abandoned by her mother. We only see her complain or act out a handful of times; the rest of the film she comes across surprisingly mature.

As the film progresses we get to understand the key relationships in Lauduree’s life. Despite the actions of her mother she never loses faith in her childishly hoping that she’ll change. This relationship shows us just how young she really is as it’s clear her mother will never put her daughter first. With her grandmother Greta, she has a more distanced relationship. Greta is a fiery woman and doesn’t understand how to communicate with her grand-daughter. On the verge of moving in with her long-distance boyfriend, she struggles to see past her own needs.

The most vital relationship in Lauduree’s life is that with her teacher Ms. Markovi. She looks up to her teacher due to their shared passion of science and almost treats her like a replacement mother. In Ms Markovi she sees stability, love and nurturing; something she wishes she could get from her own family.

Perla Haney-Jardine is the standout performance in Future Weather. She convinces as both a teenager and a passionate environmentalist. Her performance is perfectly nuanced and she displays incredible control for someone so young. There are lots of scenes where she’s alone on screen and she is given a great amount of flexibility within the role to stretch her acting muscles. Amy Madigan’s performance is worthy of note as Lauduree’s grandmother. She comes across tough as old boots but slowly she strips the layers off and shows the real character underneath the bravado. It’s nice to see Lili Taylor back on our screen too putting in a restrained and different kind of performance than we’re used to seeing from her.

Jenny Deller’s film is something pretty special. It’s beautifully crafted and shot marking her out as someone to keep an eye on in the film industry. She directs her cast fantastically here and Future Weather is a film that will make people stand up and take notice. Full of great performances and a refreshingly original storyline, Future Weather is a real gem you need to discover.