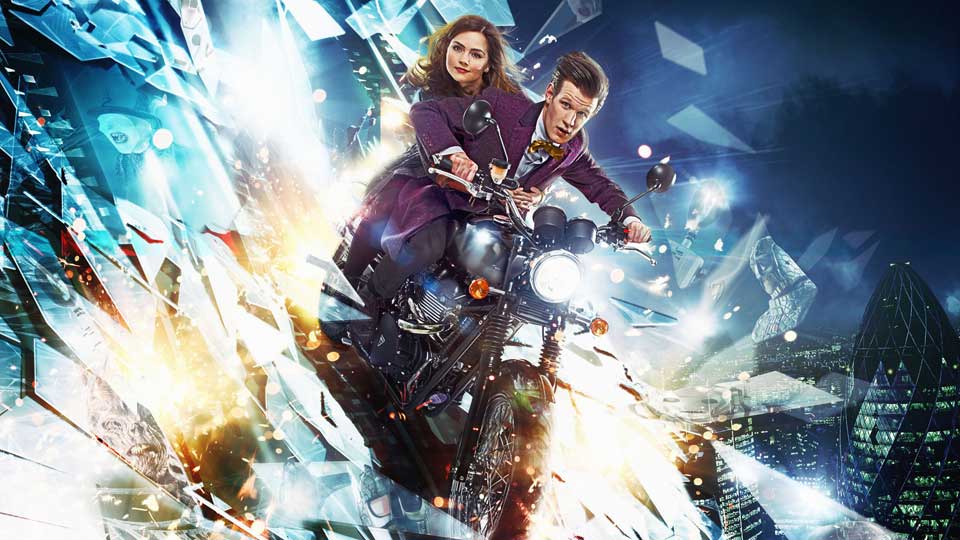 Doctor Who returns for Easter

A new promotional image for Doctor Who has been released showing the Doctor (Matt Smith) riding a motorcycle down the side of a skyscraper with companion Clara (Jenna Louise Coleman) on the back.

Doctor Who is set to return to BBC One on 30th March (Easter Saturday) with The Bells of St John which the BBC has described as ‘a modern day urban thriller’.

The episode has been written by Steven Moffat and it will mark the official introduction of new companion Clara Oswald, who has already made two appearances in the show. Set against the backdrop of London, the new episode will introduce new enemies the Spoonheads who will battle with the Doctor as he discovers something sinister is lurking in the Wi-Fi.

Steven Moffat, executive producer and lead writer, said: “It’s the 50th year of Doctor Who and look what’s going on! We’re up in the sky and under the sea! We’re running round the rings of an alien world and then a haunted house. There’s new Cybermen, new Ice Warriors and a never before attempted journey to the centre of the TARDIS. And in the finale, the Doctor’s greatest secret will at last be revealed! If this wasn’t already our most exciting year it would be anyway!”

Guest stars for the new series include Celia Imrie; Richard E Grant; Warwick Davies, Jessica Raine; Dougray Scott and Tamzin Outhwaite, as well as for the first time on screen together, mother and daughter Dame Diana Rigg and Rachael Stirling.

Pip Ellwood-Hughes
Pip is the Editor of Entertainment Focus and the Managing Director of agency Piñata Media.
Previous article
90210 to end after current season
Next article
RTS announces shortlist for Programme Awards 2012