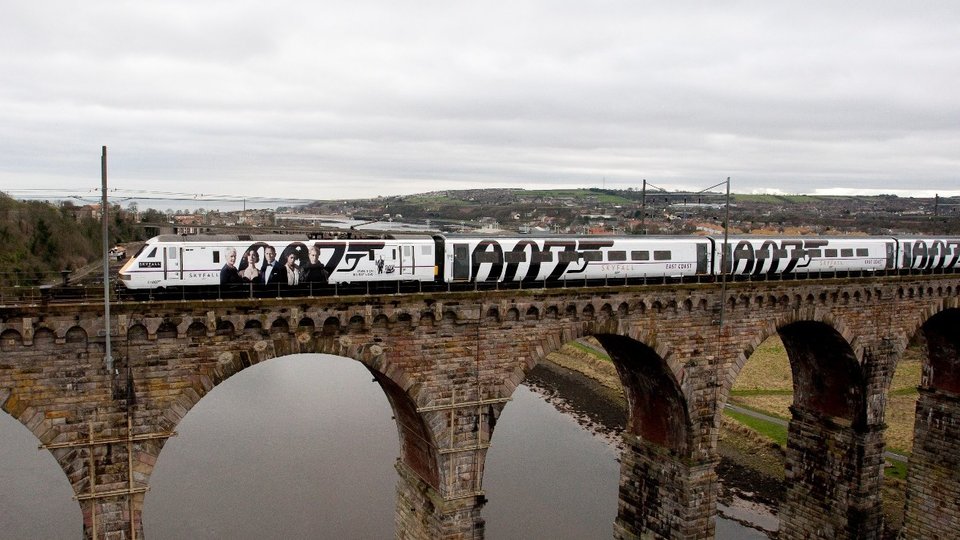 To mark its unprecedented success at the UK box office and its release on Blu-ray and DVD this week, Skyfall has become the first film to lend its name to a train in the UK, after the East Coast train was unveiled on Platform 007 at London King’s Cross Station over the weekend.

Now Skyfall, Train Number 91007, is going into active service, as it made its maiden public journey at 05:40 on Monday morning, on the Flying Scotsman route from Edinburgh, arriving at London King’s Cross at 09.40.

Naomie, who was among the VIP and media passengers of the maiden journey, said: “This train is absolutely amazing and what they’ve done with the livery is beautiful – I never thought that I would see my face on the side of a train.  It says a lot about the success of Skyfall that it has become the first ever film to give its name to a train in the UK and it’s so exciting that it’s going into public service from Monday.”

“It’s really exciting, and I am sure our customers will look forward to travelling on Skyfall too, starting with our prestigious Flying Scotsman service from Edinburgh and Newcastle to London on Monday morning.”

Naomie and her fellow passengers on the train’s maiden journey enjoyed Skyfall Martinis served by Erik Lorincz, who collaborated on Skyfall, and were treated to a toast of Bolinger as the train crossed the Royal Border Bridge, where an Agusta Westland helicopter took some stunning photographs of the train.

The train’s first official public journey will stop at Newcastle at 07.03 before arriving at London’s King’s Cross at 09.40. Customers hoping to travel on the Skyfall train over the coming weeks can look out for it travelling between London, Edinburgh, York and Leeds.

Skyfall itself features two classic train scenes – a thrilling chase on the Istanbul Railway in the opening sequence, along with an epic London Underground sequence in which a tube train literally goes off the rails when villain Silva (Javier Bardem) wreaks havoc in the Underground network.  James Bond has had no shortage of train adventures on the silver screen over the past fifty years – from fight sequences in Octopussy and The Spy Who Loved Me to more recent moments in Casino Royale.