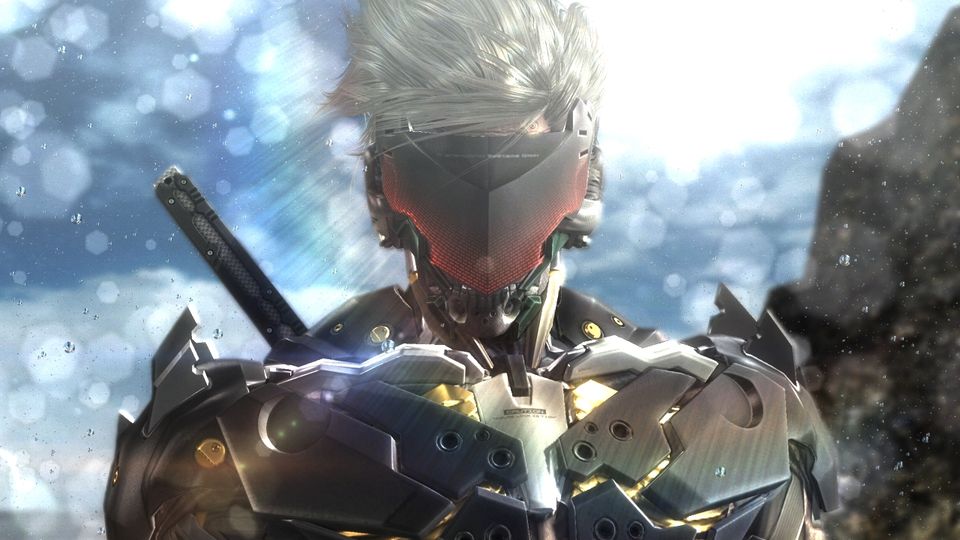 Metal Gear Rising: Revengeance is the ninth game in the Metal Gear series and was created in collaboration between Platinum Games (Bayonetta, Vanquish) and Kojima Productions (Metal Gear series) with Konami handling the publishing. The game is set around four years after the events of Metal Gear Solid 4: Guns of the Patriots. This time around players take the role of Raiden, the cyborg assassin, who was first introduced in Metal Gear Solid 2: Sons of Liberty.

Metal Gear Rising: Revengeance begins with an optional short tutorial which takes place in a Virtual Reality setting. Here you can learn how to control Raiden and his sword. The left stick is used for movement with the right stick for camera. Raiden is very agile and can run, jump and slide. Holding the Right Trigger activates his Ninja Run which is a bit like a Free-Running mode. This allows Raiden to traverse the environment without you needing to worry about obstacles.

While running Raiden can swing his blade to attack enemies and deflect bullets as well as performing a powerful sliding attack. He has a mix of light and heavy attacks which can be strung together to execute combo moves. In Revengeance there is no simple block button, instead you need quick reflexes to perform a counterattack in the direction of your enemies attack. This takes some practice but when done correctly it allows Raiden to parry attacks from all directions.

The focus of the game is non-stop action and brutal combat but there is still a little time for stealth. When Raiden is able to get above or behind his enemies without them knowing of his presence he is able to deal devastating execution moves.

Since the events of Metal Gear Solid 4: Guns of the Patriots Raiden has begun working for a private military company called Maverick Securities. In the first mission of the game, while running protection for the Prime Minister of Montenegro, they come under attack by cyborgs and Metal Gear Rays from Desperado Enforcements. They kidnap the Prime Minister and Raiden gives pursuit with his trusty High Frequency Blade at his side. Unfortunately they prove too strong for him, the Prime Minister is killed and Raiden is left with an injured left eye and missing arm.

Fortunately being a cyborg means losing limbs is no big deal and Raiden is rebuilt with stronger cybernetic enhancements. His new body is more powerful but works differently and it requires Raiden to gather materials from enemies to keep it running. When attacking you automatically absorb electrolytes from enemies to restock your energy.

The big gimmick of Revengeance is the blade that Raiden carries which is able to slice through almost anything. By holding down the Left Trigger you enter Blade Mode. Here you can perform vertical and horizontal strikes to cut through virtually anything like a hot knife through butter. Moving the right stick lets you adjust the angle of your blade which allows you to slice things just the way you like. It’s easier to understand after a few tries and becomes incredibly addictive. Before long we found ourselves running off just to find things to slice to bits.

When your energy is full Blade Mode activates a technique called Zandatsu which means cut and take. The action moves into a kind of slow motion bullet-time to give you time to cut how you want. This also highlights where you need to cut an enemy to remove their healing unit to replenish your own health.

Staying alive in Revengeance is all about constant movement and going on the offensive. There’s no fancy cover system so you need to learn to adapt quickly to situations and prioritise targets. As soon as you’ve worked out who to kill next it’s important to get close and engage them in melee as quickly as possible. Raiden has a sub-weapon slot allowing him to carry items such as grenades, rocket launchers and homing missiles which are useful for attacking at range while you close the gap.

The campaign is split across eight chapters of varying length and a first playthrough on normal difficulty will take the average player around 6-8 hours. Expect this to increase as you up the difficulty. Each chapter is broken up into smaller sections and the game rates your combat performance at the end of each. Obtaining the perfect S rank will take most players a lot of practice. The action is also broken up as you progress by many cut-scenes which further the story. These are incredibly well done and also act as a welcome breather from the relentless combat.

As you complete each section the game automatically checkpoints but you can also phone the accident-prone Courtney on your team to save. It’s also possible to speak to Boris, Kevin and the Doktor. The Doktor allows you to spend your Battle Points earned through combat to upgrade your skills, weapons and abilities. The game also has timed VR missions to unlock by finding suitcases during the main campaign for an additional challenge.

The most impressive parts of the game are easily the frequent boss battles. Most of these are quite lengthy and are split up into multi-stage affairs where the tactics keep changing. Most require some trial and error but you know when you fail it’s usually down to your own mistakes. With each try you can feel yourself getting better and when you finally take a boss down you feel a huge sense of achievement. They make you smile too at how bonkers they are so expect to be doing things like sprinting down the side of a crumbling church spire, throwing Metal Gear Rays around by their tails and leaping across missiles to slice a helicopter to bits with your sword.

As brilliant as the game is and how stunning it looks in action we do have some complaints on the camera. It often struggles to keep up with the lightning-fast action which forces you to guess where an enemy is if they go out of view. The slide attack makes this bearable and you get better with practice. It’s very important that you learn the visual and audible cues that help you understand your enemies. Parrying attacks is pretty tough in the first place but the camera makes them tougher than it needs to be which will get you killed often on the higher difficulties.

Metal Gear Rising: Revengeance took us a little by surprise at just how fantastic it is. The game provides a very different experience to previous Metal Gear titles and takes the series in a new direction. The combat is some of the best around and it’s incredibly satisfying. Revengeance is a game that demands to be replayed and gets better the more you do. We hope this isn’t the last we’ve seen of Raiden. For us Metal Gear Rising: Revengeance is an essential purchase.

Greg Ellwoodhttp://www.entertainment-focus.com
Greg is the Deputy Editor of Entertainment Focus. He writes about Games, Tech and TV. You can find him on Xbox/PSN/Steam as Tahllian.
Previous article
Dokuro review
Next article
Watch the PlayStation 4 reveal live on EF tonight

Death Stranding is coming to PC

PlayStation Plus games for March 2019 announced