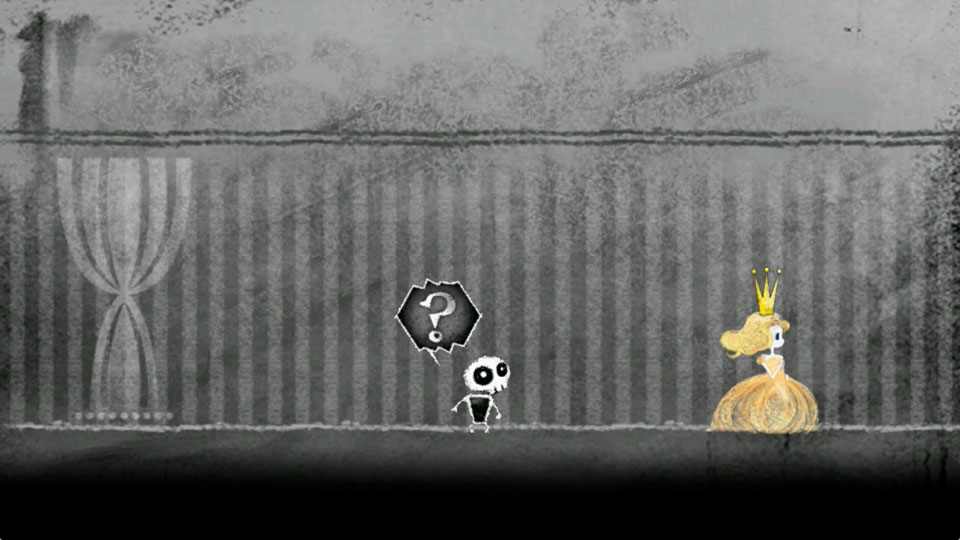 Since its release the PlayStation Vita has frustrated fans with its patchy game releases. It’s true to say that the powerful handheld hasn’t really shown what it’s capable of with the majority of titles released for it as of yet. Despite that if you dig far enough and look away from the mainstream you’ll discover some gems; new puzzler Dokuro is one of those.

Dokuro is a beautifully simple puzzler that is seriously challenging. Put you in the shoes of Dokuro, a skeleton, who is trying to save a beautiful princess from the clutches of demonic leader the Dark Lord. With the princess not keen to agree to the wedding the Dark Lord is trying to impose on her, it’s down to Dokuro to help her navigate her way out of is castle to safety. In your skeleton form the princess doesn’t acknowledge your existence but you can toggle between skeleton and prince by using a magic power giving Dokuro different abilities.

Each stage of Dokuro is broken down into 10 bite-size puzzles that require you to help the princess get from A to B. In order to achieve this you need to really think about your environment and understand the best, and quickest, way of getting the princess to safety. As a skeleton you can jump, push and pull things, and use chalk to connect items or burn them. You can also hit out at enemies with a bone to avoid immediate danger. If you double tap the front of the PS Vita you transform into the prince and are able to carry the princess, and better defeat enemies with your sword. During most puzzles you need to switch between the two in order to complete it. The catch with transforming into the prince is that your magic doesn’t last long so you need to be careful not to drain the power otherwise you have to wait for it to recharge.

Thankfully for Dokuro the princess is armed with some sense; not much mind but some. She won’t throw herself onto spikes and generally avoids most dangers. Having said that there are times you need to use the objects around you to control her behaviour. It’s also common to have to transform into the prince, pick her up and dash her to safety. You’ve got to be really aware of where she is at all times otherwise she will end up dead and you have to restart the challenge.

Throughout the game there are boss fights and these prove to be just as tricky as the rest of the game. It pays to observe the behaviour of the boss to identify what he’s going to do and how you can inflict damage on him.

For those gamers who love puzzlers you’ll find much to admire about Dokuro. The difficulty increases stage-by-stage and believe us when we say you’ll be scratching your head pretty early on. The game is a decent length and there’s a surprising amount of brain-power required if you want to complete it.

There are tokens to collect throughout the levels, which are not always easy to get your hands on, and there are plenty of trophies to unlock as you work your way through the game.

One of the things we loved about Dokuro is its stunningly simple visuals. The whole game has a charcoal feel which works well with the chalk you need to use throughout. The design is sparse and recalls a Tim Burton-esque look and feel. As a skeleton Dokuro is small and almost colourless but when he transforms into the prince he’s resplendent in shining blue. The level designs are minimal but impressively effective. At times you find yourself having to contend with two boxes, a variety of spikes and several platforms. Despite its simplicity though you feel satisfied as this is a game that makes the most of everything you see on the screen.

Dokuro is an addictive, clever and satisfying puzzler. With a great narrative and some seriously tricky puzzles, it will satisfy even the most seasoned puzzler. We struggled to put it down once we got going and we think your experience will be similar. Dokuro is a rare treat and one of the best games we’ve played on the PS Vita. If you fancy a challenge and plenty of quirk then Dokuro should be top of your PS Vita wishlist.

In this article:Dokuro, GungHo, PS Vita