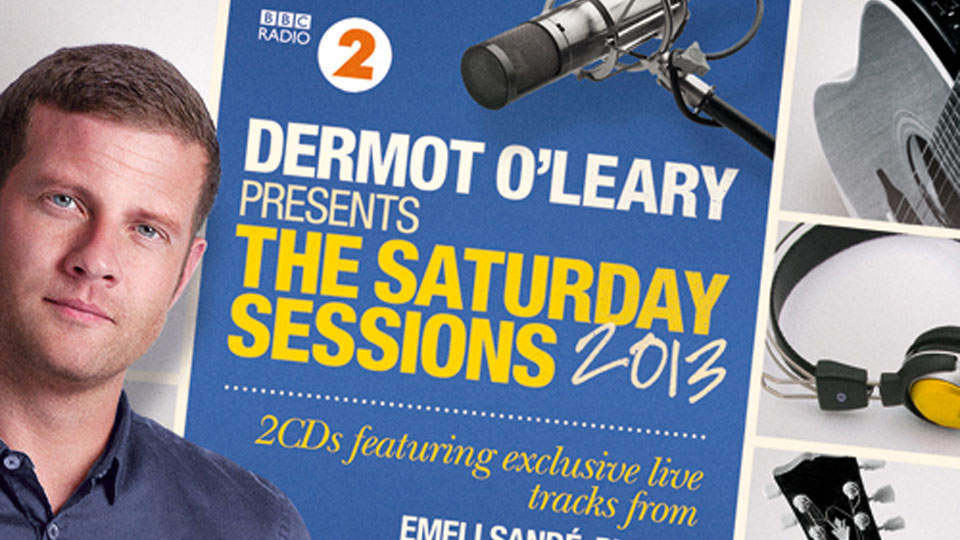 In recent years Dermot O’Leary has managed to translate his BBC Radio 2 show into a hit compilation series. His show has become renowned for artists performing live sessions of their own material as well as selected covers by other artists. Dermot O’Leary Presents The Saturday Sessions 2013 features 39 tracks across two discs highlighting Dermot’s favourite performances from the past year.

The Saturday Sessions 2013 is essentially BBC Radio 2’s equivalent of BBC Radio 1’s Live Lounge releases. Rather than featuring a collection of upcoming indie and pop stars however, it gears more towards an older audience whilst still remaining highly commercial. There is crossover with its sister station though with some familiar names across the 39 tracks. The collection kicks off with the omnipresent Emeli Sande who performs a cover of The Beatles’ classic Eleanor Rigby.

Over the course of the collection the usual names crop up. Jessie J performs her hit Price Tag, Robbie Williams contributes a live rendition of his recent hit Candy, and critically-acclaimed singer-songwriter Laura Mvula performs a special version of her single Green Garden.

There are some surprising covers included on this collection. Maximo Park transforms Emeli Sande’s Heaven into an emotive acoustic ballad whilst James Blake offers a stunning rendition of Joni Mitchell’s A Case of You. Maverick Sabre manages to pull off Alicia Key’s piano ballad Empire State Of Mind Part II Broken Down. Our favourite cover comes when Will Young strips back Blondie’s Hanging on the Telephone recreating it as a gently piano ballad full of soul.

The Saturday Sessions 2013 suffers from the same thing the Live Lounge releases do. Sometimes the artists just can’t cover the songs they choose. One such example is Ed Sheeran who attempts, and fails, to tackle Jessie J’s Who You Are. He removes all the power and the emotion from the original track and the result is underwhelming. Similarly Plan B manages to ruin Blur’s classic Song 2 with a strained and gravelly vocal that is almost unintelligible. Sometimes artists can’t even pull off their own songs. Case in point is the tuneless Florence + The Machine who surely has to be the most over-hyped artist on the planet. Her version of Never Let Me Go is what we imagine a hungry sea-lion sounds like when calling for its dinner.

Like so many compilations The Saturday Sessions 2013 is a hit-and-miss affair. It’s unlikely that anyone will love every track and for us there wasn’t enough hits for this to be a truly essential purchase. We could probably have distilled the decent tracks down to one disc. It’s always interesting to hear other artists tackle well-known songs but this collection, like the Live Lounge ones, proves that some artists really should stick to what they know.