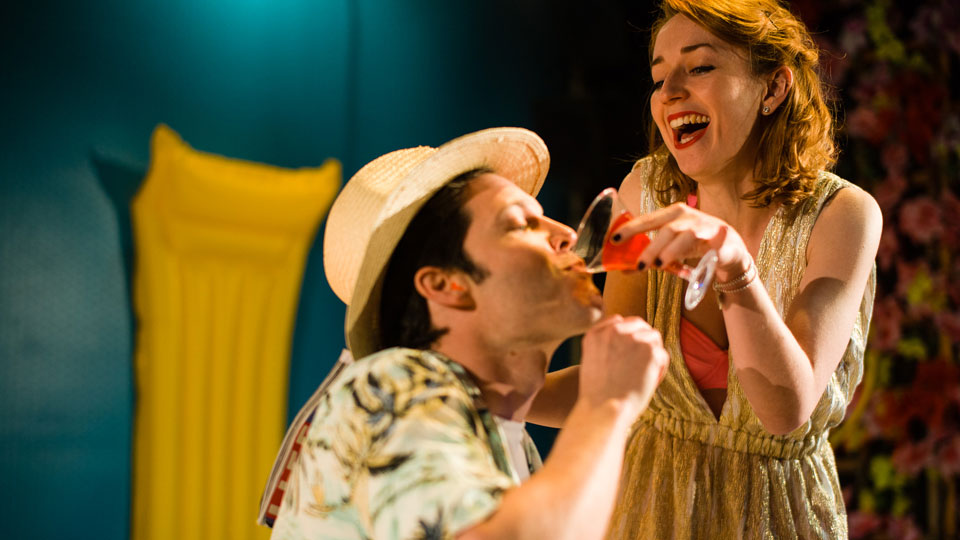 L’Elisir D’Amore (The Elixir of Love) is OperaUpClose’s 12th production (which are all in new English translations) since its foundation in late 2009, with their experiment of producing La Boheme in a tiny pub theatre in Kilburn. Since then, OperaUpClose has gone on to win an Olivier Award and a Whatsonstage.com Award, they have worked with directors and composers including Mark Ravenhill and Michael Nyman and it has become the resident company at the King’s Head Theatre, which now also tours productions to mid-scale theatres across the UK.

In 2012, OperaUpClose launched Flourish which was a competition to find a new chamber opera. The winning piece is called Two Caravans (based on the novel by Marina Lewycka) and this will premiere in the autumn. OperaUpClose’s next production (in April 2013) will be Verdi’s The Masked Ball. For now, let’s concentrate on their latest offering, which is Donizetti’s L’Elisir D’Amore, in a new English version by Thomas Eccleshare.

L’Elisir D’Amore is meant to be set at a ‘glamorous 1950s garden party at the height of Hollywood’s golden age’. We’re not sure that the costumes were up to the Hollywood standard at the time and the only part that remotely added to the ‘garden party theme’ was a bit of fake ivy hanging from the roof, some cheap looking Hawaiian style flowers attached to the wall and a bit of fake grass on the floor.  We’re not entirely sure that this constitutes as a ‘ glamorous party’! The yellow lilo attached to the wall, which was meant to resemble and look like an outdoor pool, was quite a funny sight, but the feel was definitely more Southend Pier, than Santa Monica Pier! That’s not a bad thing, but the description of the outfits and set is definitely not accurate. Nevertheless, let’s take a look at the story.

Adina is the hottest star in Hollywood and Nemorino adores her. When an ambitious army officer makes a very public proposal to Adina, Nemorino is in despair, until Dulcamara, the smooth-talking stylist, comes to his rescue with a remedy which he promises will win Adina once and for all. The first act starts off pretty slowly for us, as we found ourselves looking at our watch every ten minutes or so, which is not the greatest indication that we were really enjoying it! The production definitely livens up when Dulcamara engages in a bit of audience participation, which is genuinely very funny, particularly given the serious opera looking crowd that came to watch it, as he walked out to the audience members, pointing at them and serenading them with such flattering lyrics such as “and for the slightly more mature, does growing old depress you? This powder will eradicate the wrinkles that depress you. For the pastier complexion, you need subtle bronzing action and with a face that’s strange, maybe you should try the whole range”, this was very, very funny and the room definitely brightened up from herein.

As we sat through the production, although the cast are very talented singers, we’re just not sure what it is about the show that didn’t quite hit the nail on the head for us. There are some good parts in the production, some unusual parts and the cast are very talented in their ability to hit the required notes – but their acting is slightly less convincing, as they don’t really look to enjoy that part of it so much. It might have been that the performers didn’t really look as though they were truly enjoying themselves, that the whole feeling came across as slightly fake. The musicians on-stage looked slightly as though they were just going through the mill of providing the music and they didn’t look happy either – although again, they are extremely talented and the music is great. If at any point it looked as though they were about to enjoy themselves, this would last for all of thirty seconds, before their poker face was sternly brought back on, perhaps this was due to nerves? Seeing as the production is quite literally “OperaUpClose”, as the company is called and we are seated inches from the stage, this isn’t something that they can really afford to do, as it added to the whole ambience and we felt slightly awkward when we looked at them performing the music, it wouldn’t have hurt to have seen them smiling – rather than looking like they were sucking on a piece of sour lemon, especially as this is meant to be a comedy.

The audience participation parts of the production are by far the best parts of this opera and they are the parts that we enjoyed the most. We are treated to more of this, in the second half – which again had us laughing-out-loud and this stopped us from looking at our watch! The opera itself is meant to be a light-hearted comedy and fun. Whilst this production won’t be to everyone’s tastes, for those that do like opera, this could be seen as an ‘alternative’ night out and you would be most likely to enjoy it. It might be a nice introduction to newcomers to opera too, although hearing such powerful voices in such close proximity can be a bit daunting and slightly harsh on the ear drums! All in all, we guess that it is a fun night out if you don’t take the production too seriously and enjoy hearing opera live, in a less formal setting.