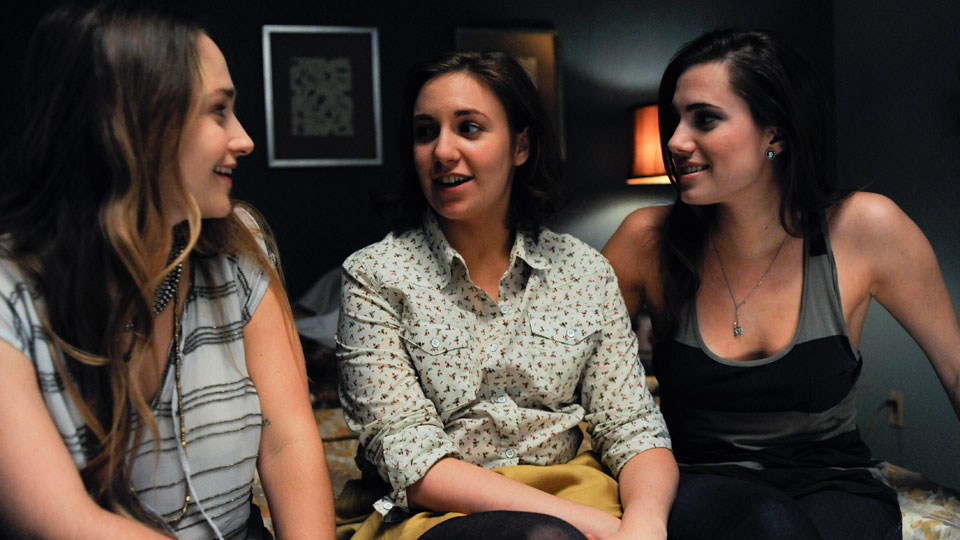 Hannah Horvath (Lena Dunham) is an aspiring writer whose parents decide to cut her off after she moves to Brooklyn. Not taking the news very well, Hannah turns to her friends Marnie (Allison Williams), Shoshanna (Zosia Mamet) and Jessa (Jemima Kirke) and her odd on/off boyfriend Adam (Adam Driver). As Hannah tries to make it in New York and stand on her own two feet she faces trials and tribulations with her career, her friends, her love-life and her parents.

Girls became a word-of-mouth smash when it debuted on HBO in 2012. Created by lead star Lena Dunham and produced by comedy maestro Judd Apatow, the show struck a chord with audiences presenting a realistic depiction of life for young women trying to find their place in life. Due to its New York setting it was immediately, and unfairly, compared to Sex and the City but it’s absolutely nothing like that show. Whereas Carrie Bradshaw and co were all about sex and fashion, the characters in Girls are just enjoying growing up and finding their feet.

The thing that makes Girls stand-out from other shows is Lena Dunham remarkable talents as a writer. She scripts realistic dialogue and has created four female characters that are very different but perfectly complement each other. Hannah is the neurotic and slightly crazy one, Marnie is the precious princess, Shoshanna is the innocent one and Jessa is the English hippy-chick. Girls is full of fantastic one-liners and it’s pretty unflinching in its portrayal of the each woman. The show will leave you with your jaw on the floor thanks to its rather full-on and interesting sex scenes, usually between Hannah and Adam. It doesn’t shy away from giving you a warts and all look at the lives of its characters.

The entire cast of Girls is fantastic. Lena Dunham deserves all of the acclaim and awards she’s received as she’s utterly fearless as Hannah. There seems to be nothing she won’t do and her performance is pretty brave. Zosia Mamet is the scene-stealer of the bunch often getting the best lines. She plays Shoshanna as a naïve and terrified young woman who has barely any life experience and she’s a joy to watch. Allison Williams gets the most polarising character with Marnie who you will love and loathe in equal measure whilst Jemima Kirke flies the English flag as the free-spirited Jessa (who is also Shoshanna’s cousin). You’ll spend a large amount of time wanting to slap Hannah’s love interest Adam (played fantastically by Adam Driver) who is quite simply one of the oddest TV characters ever.

Extras on the DVD release include episode previews, interviews with the cast and Judd Apatow, audio commentaries and a look inside the episodes.

Girls: The Complete First Season won’t be for everyone but if you like your comedy raw and on the edge then you’ll love it. Ignore the Sex and the City comparisons and take a chance on an original and refreshingly honest show. Soon Hannah and co will become your new best gal pals and you’ll love every minute you spend with them. Girls is definitely on our list of must-watch shows.