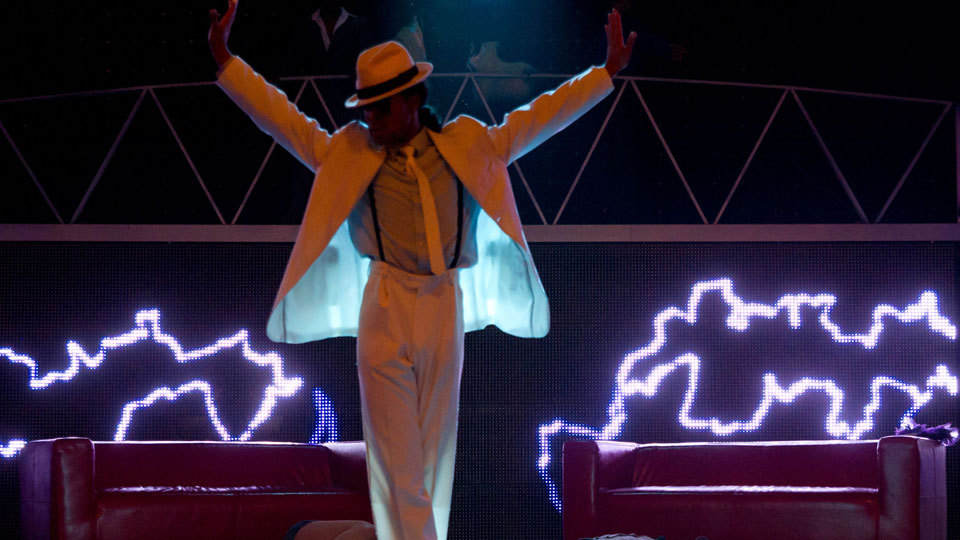 Thriller – Live moonwalked into the West End in January 2009 after three acclaimed UK tours. Thriller – Live, is billed as a spectacular show. A reminder to everyone as to why the world loves the music of Michael Jackson and the Jackson 5. Michael Jackson is one of the – if not THE greatest – entertainers of all-time. He is the undisputed King of Pop. There will never be any one like him, ever again. The music of Michael Jackson and the Jackson 5 gets a chance to live on for future generations to catch a glimmer of what he was like as a live performer and artist, through Thriller – Live. Thriller – Live, has now been played to an audience of over 1,000,000 people in the West End alone and it is starting its fifth year at the Lyric Theatre.

When Michael Jackson died, the Lyric Theatre became a focal point for fans from all over the world, who created a massive shrine of flowers, candles, and tributes to him. More than forty books of condolences were signed in the foyer, then sent to the Jackson family. A year after his death, a permanent West End memorial to Michael was unveiled in the theatre foyer. We felt a slight twinge of sadness and a slight lump in the throat when we saw this plaque. However, there is no time for sadness, as we were about to watch, what is in way, a musical tribute to his legacy.

The pre-show atmosphere and tension builds in the theatre, as the notes of Carmina Burana echo and bounce off the walls. A giant video montage of Michael Jackson fills the screen, showing him smiling and having fun. Up come the Jackson 5, complete with the young Michael Jackson, to a chorus of ahhhhh’s around the theatre. I Want You Back, ABC, Blame It On The Boogie. Everyone adores these songs and they get everyone feeling happy and have people dancing in their seats, with huge smiles and hand clapping.

Haydon Eshun was once a member of the boy-band called Ultimate Kaos. His narrative introduction, with a faux-American accent did not convince. He just sounded like a Brit trying to put on an American accent. His vocals were good in parts, particularly his falsetto. Shake Your Body Down was where a bit of audience participation was required. The audience were spilt into two sides, to see who would sing the loudest. Seriously, how many times can you hear “c’mon, you can do better than that?” By the seventh time that they’ve said this and you’re still chanting, we had flash-backs of watching the Smash Hits Poll Winners Party. Surely asking the crowd over and over and over and over again to “c’mon – sing louder than that”, is going to grate? By around the twelfth time that they asked us to sing louder, it really did grate. A few times would have been more than enough. Less is more.

Britt Quentin is a Michael Jackson looky-likey. One will rarely see someone with such an ability to dance the Michael Jackson moves, as this man. Nailing Jackson’s moves and moonwalking across the stage as if he was floating on a cloud, he had the moves practised to perfection. We did feel that it was ironic however, that the show is called Thriller – Live. Not Thriller – mime. Therefore, why was he miming? Particularly when the programme gives us this quote, mentioning that he ‘came into the world singing’, and that he was born with  ‘a silver microphone in his hand and a perfect pitch’. Isn’t it a shame then, that we didn’t get to hear it, but instead had to make do to listening to the dodgy backing track, as he was clearly miming and not always completely in time, particularly to Smooth Criminal? It doesn’t make sense.

The blonde female dancers were just not up to standard. We hate to say it, but they really do need to tone and trim up – and get fit! These ladies were anything but fit and they were tired looking. By the end of a few songs, they definitely lacked energy, with their mouths wide open, they looked in pain and were panting for breath – as if they’d just eaten a Christmas dinner. Maybe they had. Their movements were clumpy, lacklustre and we definitely expected more. Also, how hard can it be to bang a drum in time? Why did they also feel the need to bash the drums, like they were auditioning for a role as one of the twelve drummers drumming? Maybe someone needs to tell them that Christmas finished last month? If you think that sounds harsh, one must remember that Thriller is a musical celebrating Michael Jackson. Michael Jackson, one of the greatest ever performers to have ever graced the stage, someone who was a perfectionist, who showed incredible discipline and who was a complete master of movement, who would practice, practice, practice, practice and practice. Then practice some more. To give us clumpy dancing and being physically unfit and ungracious is an insult to the audience members who have paid to see this show.

Singing PYT was Trynece Cobbins’ finest moment of the show and she stole the show with her incredible vocals and stage presence. She has a magnetic, star quality who really deserved to be on that stage and we loved watching her. Another member of the cast who shone (following on from his appearance in The Wizard of Oz at the London Palladium) and someone who is certainly a star in the making, is young Eshan Gopal, who played the young Michael Jackson. Full of verve and happiness – he was a joy to watch and he has a delightful voice.

Thriller – Live really had our opinion divided. Whilst there were some parts that we truly amazing, such as Britt Quentin’s dancing, Trynece Cobbins’ vocals and the dancing of Stefan Sinclair and David Olaniyi – the other parts of the show truly let the whole production down. Our opinion is, that they definitely need to re-cast. With the greatest respect to Oggie (one of the lead vocalists), his movement was incredibly stiff. He looked as though someone had sewn a wooden coat hanger into the back of his jacket, as he didn’t move his shoulders and we were expecting a lot of smoothness! Instead, he looked like a rugby player who had the grace and stature of someone trying out ballet for the first time – both in build and in movement. The Jackson 5 were slim and fit used to glide on the stage. Unfortunately, although he was clearly enjoying himself with a perma-grin and he was trying hard, with sweat cascading down his face and bulky frame, we’re not sure that everyone else was enjoying his performance.

One lucky girl from the audience got the chance to meet the cast on stage and was presented with a millionth customer golden ticket. She was also lucky enough to receive a copy of a stunning, sold-out limited edition, The Official Michael Jackson Opus and the collection of Michael Jackson’s back-catalogue of CD’s, courtesy of Sony.

They definitely saved the best until last. Howls echoed around the room. You know which song is coming up next? You guessed it – Thriller! The cast jumped out into the audience in their zombie attire and gave us the famous Thriller dance, this was brilliant. Heal The World was quite moving and showed us what the cast are capable of when they really try. Black and White was also fantastic. Aren’t his songs just the perfect pop songs? We adore them.

We support this show and want it to continue, because they’re continuing the legacy of Michael Jackson and his music in the West End. We definitely think that they need to re-cast and also sort some of the wardrobe department out too! Michael was a man who would go shopping in Harrods and buy himself a £4 million pound vase, on the way to buy his bespoke suits. Why therefore, are some of the outfits so cheap looking? Surely they could stretch this out? A recent visit to the Victoria and Albert Museum, where we went to see the Hollywood Costume exhibition, highlighted the importance of costume. A costume shows to the world who you are in a heartbeat. No words are needed and people do judge you on your outer appearance. In the words of Madonna ‘image is everything’. When the cast performed Beat It and a mock fight was shown, their rough looking characters and cheap looking clothes fitted perfectly to the occasion. Even though unfortunately, they are not meant to look as if they are ‘rough’ or ‘cheap’!

We would just like to give the cast a major big shake and remind them that the reason they are performing these songs, are because we want the legacy to live on. We do not want to see this show on the scrap-head of unloved West-End shows, as it doesn’t deserve to be. The show is regularly updated with additional songs, new visuals, additional wardrobe changes and choreography. We hope that they take note and give this current cast a shake-up.

Thriller – Live was originally conceived and created by Executive Director of the show, Adrian Grant, a long time associate of Michael Jackson, and author of Michael Jackson – The Visual Documentary. We’re sure that he would have expected and wanted more, with his original vision for the show.