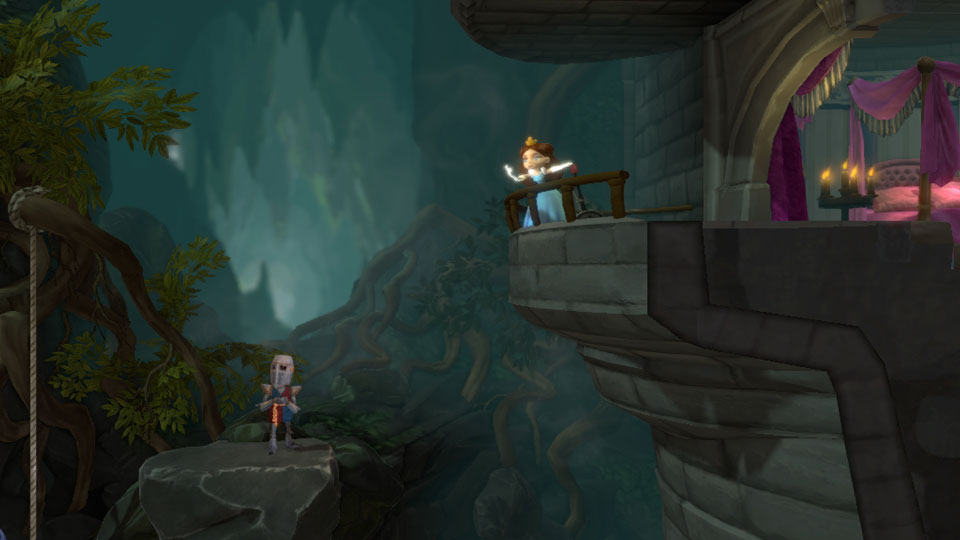 The Cave is the brand-new downloadable game from the mind of classic game designer Ron Gilbert. Responsible for some of the best point-and-click games ever created, Gilbert’s credits include Maniac Mansion and The Secret of Monkey Island. He also served as a designer on the cult classic Zak McKracken and the Alien Mindbenders which we sincerely hope is one day given a re-release. The Cave is borne out of an idea that Gilbert has had in his head for nearly 20 years and it’s finally seen the light of day thanks to developers Double Fine Productions and SEGA’s distribution.

Taking Gilbert’s trademark humour, The Cave gives players the options to pick three out of seven characters to control throughout the game.  Of course the characters are as wild and wacky as you’d expect with players choosing between evil twins, an adventurer, a monk, a scientist, a knight, a hillbilly and time traveller. The three characters you choose will change the course of the game you play offering lots of replay value so you can explore the full Cave.

Upon selecting your three characters and entering the Cave you encounter a gift shop with a rather grumpy clerk. He gives you a key and says if you find three trinkets for him, he’ll allow you to enter the Cave. From this point on the game really begins and what a complete and utter treat it is. Combining puzzles with witty voice over narration courtesy of ‘The Cave’ the game is truly one of the best we’ve ever played.

The out-there humour and puzzles is typical of Gilbert and it’s both nostalgic and refreshing to truly have to use your brain to progress through a game. Each of your characters has special abilities and you have to use the right character to solve the right parts of the puzzle. Often throughout the game the three characters have to work together so it really pays to understand your character and take note of all the items littered around the environment. Nothing is placed there for the hell of it so you really need to pay attention and cycle through your memory when you come up against a head-scratcher of a puzzle, which happens quite a lot.

Once you’ve worked through the first part of the game and found the three trinkets, you get a handle on how the game works and the way you need to use your brain to get through it. Once you return the trinkets to the gift shop clerk you enter the Cave and each character has their own story to unfold in its depths. The different Caves represent the darkest desires of your characters and there are some pretty disturbing puzzles (especially for the evil twins). In between the Caves designed around your characters, there are some that all characters must work through in order to progress. There’s also iconographs hidden throughout the Cave that reveal the backstory of your characters so keep your eyes peeled.

Visually The Cave looks stunning. The 3D rendered characters and environments look stunning and there are quite a few parts of the game where you plunge scary depths marvelling at the environments as you pass them by. Each item and interactive character has a name hovering over it making it easy to see what you should pay attention to and what you can ignore.  See if you can spot the Monkey Island and Maniac Mansion nods too.

The voice of The Cave who guides you through the game provides plenty to laugh at and serves up a good dose of trademark Gilbert humour.

The Cave is everything we hoped it would be and more. You can work your way through it in around 4-5 hours, providing you don’t get stuck on the puzzles, but the replay value gives plenty of incentive to start all over again once you’ve played it through for the first time. It’s been a long time since we’ve played a game that is so addictive, utterly compelling and provides a fresh twist on the point-and-click genre. We can only hope that Gilbert has a follow-up in the works or that he’ll revisit some of his classic titles.