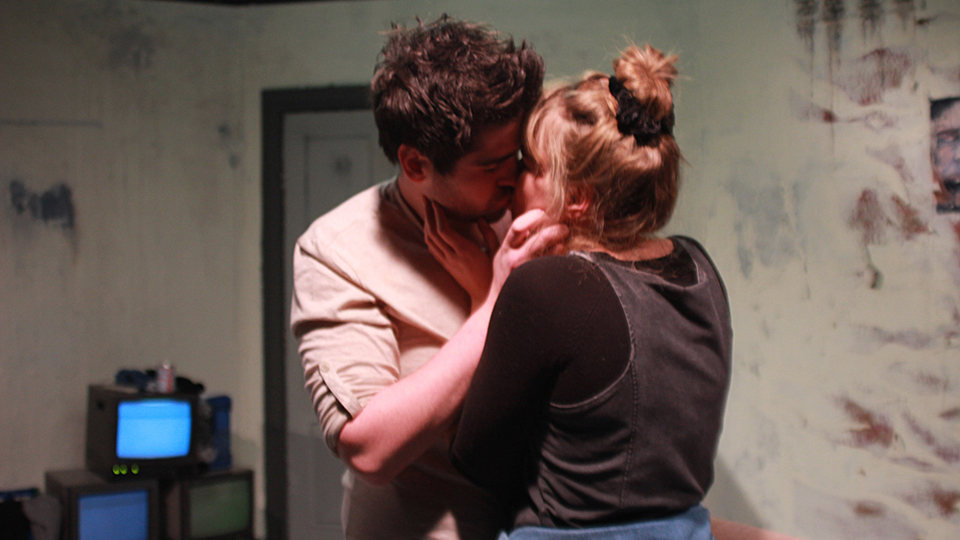 The Dreamer Examines His Pillow review

A grotty bedsit in the Bronx. Flickering lights, and a refrigerator well-stocked with beer. A grotesque self-portrait pinned to the wall. The setting for John Patrick Shanley’s neglected work The Dreamer Examines His Pillow (for which this Lightning Jar production marks its UK premiere) looks and feels bleak, and every bit as much as the character brooding in the swivel chair.

Tommy (Kieran Moloney) is a young man in crisis. Screwing his ex’s sister and stealing from his mother, he’s tortured by self-loathing and an inability to accept the consequences of his actions. His ex, Donna (Stacie Bono) calls round to reproach him, and a short first act sees, as the two former lovers argue, a distance grow between them despite the love that’s evidently still there.

There’s a lot of angst and cynicism in the first act, and where this can often feel leaden and bore the audience into submission, The Dreamer Examines His Pillow turns out to be a lot cleverer than that. Firstly because John Patrick Shanley’s dialogue is magnificent: barbed, truthful and compulsive, you want to listen. Secondly, the play has aged extremely well. If you didn’t know it was written in the mid 1980s there’s precious little to suggest it in the text; and only the commendable details of period tins of Bud and Donna’s fashion sense suggest an earlier epoch. Thirdly, the cod psychology spouted by Tommy, who’s recently ‘found god’, is made tolerable because it’s shot down in flames by the grounded and delightfully sceptical Donna. Where at the start of the play you suspect Tommy may be the most worldly-wise, Donna soon claims the upper hand in an well-structured reversal.

The cleverest aspect of The Dreamer Examines His Pillow is that it all changes after the interval, when Donna visits her father (Jason Will). From verbal sparring with the morose and self-indulgent Tommy, she enters into battle with her angry, bitter yet witty old man. ‘Dad’ is a fascinating character, and it’s only once he starts to espouse his philosophy on life that the play truly grips you by the throat. Suddenly, Shanley gives us permission to laugh – and the play reaches heights it never quite achieves in the first part.

The production is perfectly cast. Kieran Moloney’s Tommy is conflicted and broody, but he brings out other facets such as cowardice and arrogance, and it’s impossible not to find some charm in him. Jason Will is excellent as Dad. His comic timing is superb, yet his performance remains edgy thanks to his volatile temper. You’re never quite sure if he’s going to explode into violence or issue another bon mot, and such dangerous acting is rewarding for an audience. Holding the production together is Stacie Bono’s Donna. She picks out every change in mood in the script, especially in the second half as she learns more and more about her father and is forced to re-evaluate her opinion of him. There’s always a lot going on behind Bono’s eyes, and she deftly handles the emotional shifts of the play.

On the downside, it’s a play that takes a while to get going, since it’s not immediately clear why we should care for the characters. There are several prolonged moments of purple prose, most especially acute whenever Tommy opens his mouth, and when Donna describes what she enjoys about sex to her dad (the flowery dialogue is arguably used to heighten our discomfort), but these don’t impose at the expense of the drama.

Ultimately, this production of The Dreamer Examines His Pillow comes across as a very dark comedy, though its takes its time in showing its true colours. Anil Douglas’ direction is clean and crisp, making for an intense, attractive piece of theatre that lays itself open for all manner of interpretations. Intriguing, and very well-performed.