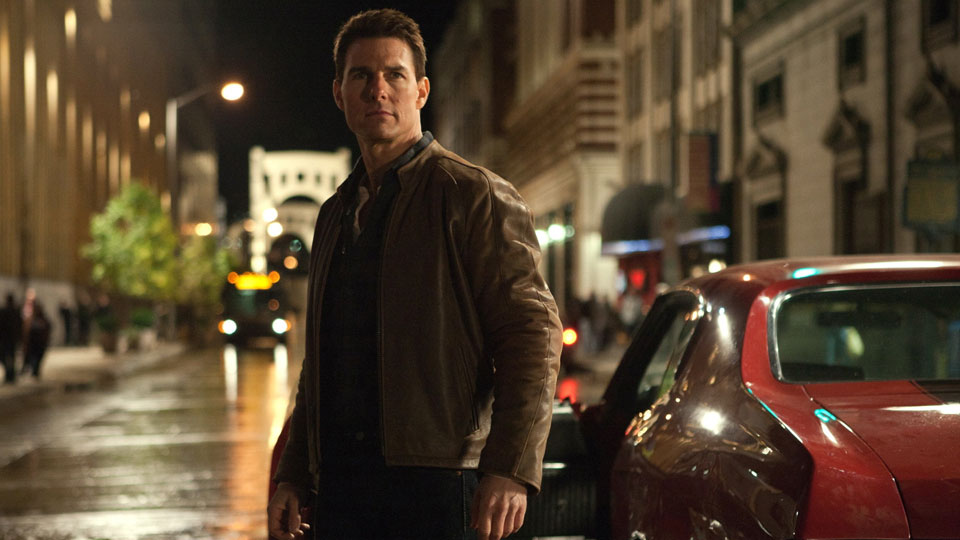 After a series of innocent passers-by are gunned down by a sniper in a park, the police manage track down the culprit. With evidence stacked convincingly against him, the accused utters just one sentence “Get me Jack Reacher”. Reacher (Tom Cruise – Mission Impossible: Ghost Protocol) is a former investigator for the Army, a live wire who bucks authority and does things his way. He has no love lost with the accused but starts to see patterns in the crime scene that suggest the police have got the wrong man in custody. So with defending attorney Helen (Rosamund Pike – Die Another Day) on board, Jack Reacher begins to investigate the case.

Jack Reacher’s translation to the big screen was inevitable giving the success of the Lee Child books. Tom Cruise may not have been the first choice that sprung to mind for fans of the pulp fiction stories but with his undeniable star power on board it was always a safe bet that this film would be entertaining.

There’s a lot wrong here but for the most part you can overlook the films’ problems thanks to Tom Cruise’s natural charm and charisma. After MI:4, Cruise has re-established himself as the action star of Hollywood ‘s A-list. Here we find Cruise playing against type (at least from the last decade) as a bad boy. He clearly has fun with the role too and it’s his cavalier attitude that’s at the centre of what works with Jack Reacher (see the bar fight scene for exciting proof).

Cruise also helps Tom Hardy clone Jai Courtney out when the two spar with one another throughout the film. Soon to be seen as Bruce Willis’ son in A Good Day To Die Hard, expect Courtney to be the new Sam Worthington for the next year or so. He does well in Jack Reacher and does possess onscreen charisma, even if Cruise does effortlessly act him off screen.

The supporting cast are impressive in stature but struggle with the pulpy dialogue of the book which screams of Dan Brown or an inferior Mickey Spillane. At times the film is riddled with poor dialogue and clichéd exchanges between characters. You’ll also see the inevitable twist coming a mile off and that ‘s squarely down to poor source material. Rosamund Pike continues to search for worthy roles in a sea of pap whilst Richard Jenkins is too good to be relegated to such a small role. However both give the film some much needed bite even despite their characters’ one dimensional obstacles.

Robert Duvall rekindles his Gone In 60 Seconds personae as an ageing gun-club owner who helps Reacher with the case whilst recluse Werner Herzog wins the random award for 2012 as a bitter villain who frequently dishes out pearls of wisdom and threat as if they were Christmas cracker anecdotes. In the hands of a lesser soul these would have stayed farce but Herzog gives the film a delicious malevolence nonetheless.

Jack Reacher does provide thrills for the Christmas holiday period. With Cruise on fine form and a cast all trying hard to rise above the dialogue, Jack Reacher is an entertaining way to spend an afternoon at the cinema. But it won’t stay with you for as long as your leftover turkey.