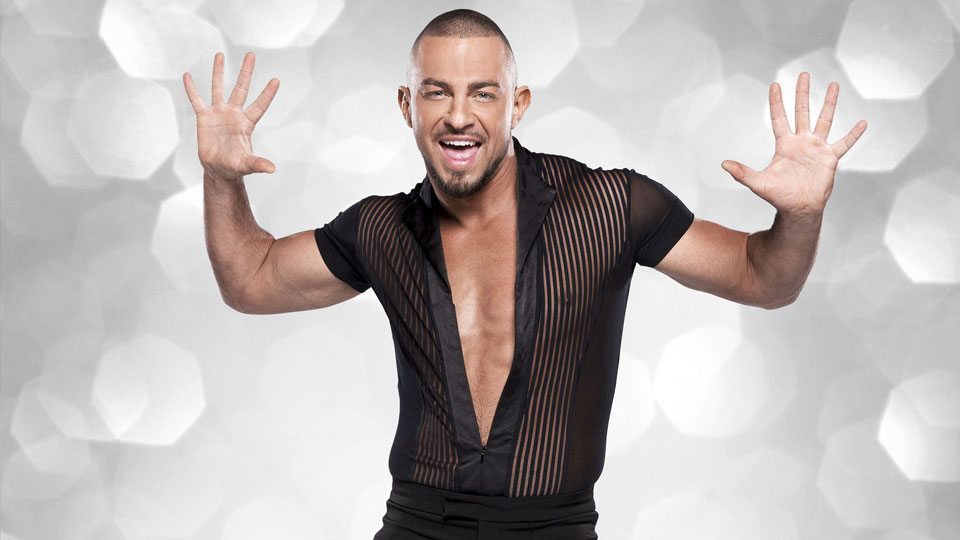 The final also reunited the entire 2012 cast for one last group dance and it was a joy to see Team RiRo aka Robin Windsor and Lisa Riley dancing together one last time (well until the tour in the New Year of course).

With the glitter now being swept off the dance floor we thought we’d give you one last Strictly treat and have a final chat for 2012 with Robin Windsor. We talked about the weekend’s final, his highlights from the series and his plans for Christmas.

‘Strictly’ is over for another year. How does it feel?

It feels really strange. The Strictly bubble has now been burst and it’s been a long four months for all of us. All of a sudden I have a day off and I don’t know what to do with myself. It was a fantastic series and Louis was a well-deserved winner. In fact all four finalists were well-deserved winners.

For the first time in a long time it was really, really difficult to pick out who was going to win. Normally there’s a standout but this year it was a very closely fought competition. I think Louis’ showdance won it for him.

His showdance definitely clinched it for him. It was quite different to the usual showdances wasn’t it?

Yes completely. On the other hand Denise’s showdance was one of the best showdances that I’ve ever seen onStrictly, if not THE best.

Denise took some brave chances with those lifts didn’t she?

I’d be very scared to do a lot of those lifts. For her to throw herself into them… it was just remarkable to see anyone do them.

The whole ‘Strictly’ 2012 cast were back together for a final dance on Saturday night. What was that like?

That backwards shimmy was pretty impressive…

We knew it would be the last time we’d be seen on Strictly this year so we gave it a million percent.

We loved that you incorporated the classic week one lift too…

Of course! We had our iconic lift from week one. What better way for us to close our show than how we opened it.

What’s been your highlight of this series?

There are a million highlights this year. It’s been amazing week-on-week. The biggest highlight for me would be getting partnered with Lisa and our week one revelation. Every week was a highlight. Every number we did was a highlight. There are going to be many more highlights on the tour.

What was your favourite routine from another couple this year?

My favourite dance of the series would have to be… It’s a choice between two; Kimberley and Pasha’s Charleston and Denise and James’ Tango. Oh also Dani and Vincent’s Viennese Waltz. I couldn’t pick a favourite. All three of them were absolutely brilliant.

Dani’s an absolute sweetheart. She grew week-upon-week in the show. She’s really, really lovely. We’re going to be on the tour together. She and Lisa were best friends from the start as well as Denise. Everyone’s just lovely and fun but I thought Dani was very underrated on the show. She should have got a lot more praise for what she did.

They were a little harsh on Dani in the final and I didn’t think it was necessary.  She was doing brilliantly and I think everybody was a deserving winner.

What’s it been like having Darcey on the judging panel this year?

Darcey has been an incredible addition to the judging panel. She brings with her such a high standard of training and she knows what it’s like for all of these dancers to do what they do. Apart from Len being the harshest ballroom judge, Darcey knows everything there is that goes into training and technique. She’s constructively criticised all the way through the show which is exactly what we all need to hear.

She’s started a bit of a craze thanks to her ‘yahs’ hasn’t she?

The first couple of weeks Darcey had about a million ‘yahs’ but they’ve been cut down a little bit now. That’s what we all love about her. She’s just fabulous, absolutely beautiful and looks incredible every single week.

Are you hoping to return to ‘Strictly’ next year?

Seeing as it’s Christmas Eve we want to know your festive plans. What will you be doing tomorrow to celebrate?

As I’m in the process of moving and everything is in boxes I’ve actually got a hotel for Christmas. I’ll be there tonight and Christmas Day with my other half. We’re going to have everything delivered to the room so there’ll be no cleaning and no cooking as we just haven’t had time.

That sound’s perfect to us!

Yeah it’ll be quite nice to not have to worry about anything.

What will you be doing to ring in the New Year?

I’m going with a group of friends to Bath just before the New Year for a few days. Then we’re going to have a big party hopefully in my new place if it’s all ready to go.

Next year is non-stop from start to end. First up is the Strictly tour which starts in February then I’m ecstatic to be starring on the West End with Kirstina Rihanoff for four months  in Burn The Floor. It’s been a dream of mine to star on the West End and I’ve finally been offered it. It’s going to be a magical year.

We can’t wait to see you in ‘Burn The Floor’…

It’s going to be fantastic to come back and star in the show that I was a part of for so many year. It feels like I’ve come full circle and I couldn’t be any happier.

‘Strictly Come Dancing’ is back for a Christmas special tomorrow (Christmas Day) at 6.15pm on BBC One and BBC HD.