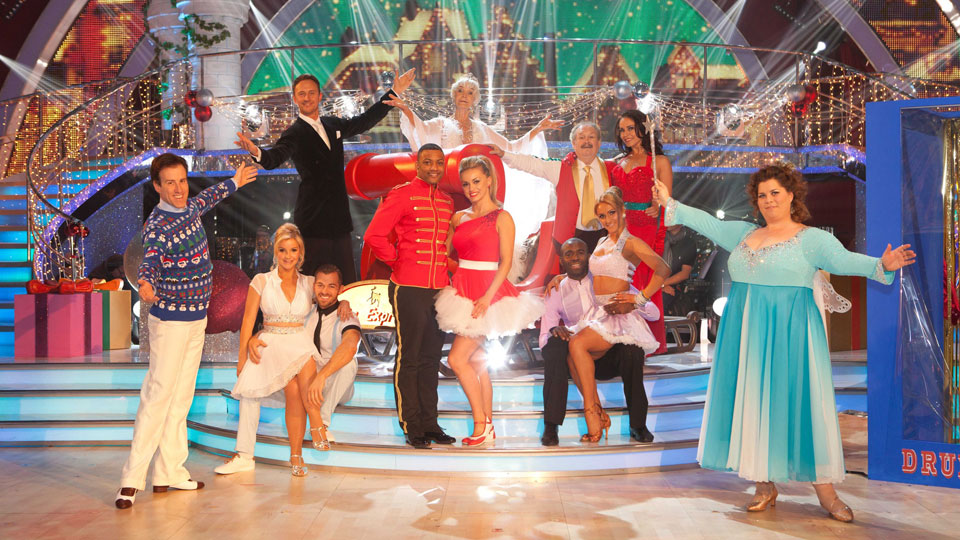 Strictly Come Dancing may have finished at the weekend but thankfully we still have the Christmas special to give us our fix of ballroom action.

To kick off the show had a group dance featuring the stars of the festive special. Taking part was JB Gill from JLS, TV presenter Helen Skelton, comedian Bobby Ball, actress Sheila Hancock, sports star Fabrice Muamba and comedienne Katy Brand. Who would be great on the dancefloor and who would disappoint with their clumsy feet?

The first to dance was JLS star JB Gill and his partner Ola Jordan. We already know that JB can bust some moves as JLS are known for their energetic live performances. In his intro video JB revealed that his bandmates have been supportive, and a bit jealous, of his Strictly stint. In his training video it seemed he was struggling a little bit to keep up but could he pull it off for his performance? Dancing the Jive could JB transfer his dancing skills to the ballroom? Len called JB ‘jive bunny’ commenting that the dance was full-on and fantastic. Bruno said JB’s Jive was a ‘cracker’ but Craig said it was a little ‘flat-footed’ and had lots of character. Darcey said the energy was amazing and she enjoyed the performance.

Comedian Bobby Ball was second to take to the dancefloor with his partner Katya Virshilas. In his intro VT Bobby revealed that he hadn’t danced for years and seemed to be having a laugh training with Katya. For his performance tonight he danced the American Smooth. How did he get on? Bruno said he thought it was ‘fruity and very funny’. Craig said it was like a Christmas pudding calling it ‘stodgy’ before criticising his timing. Darcey said Bobby was smooth and best when in hold with Katya. Len said it was ‘merry’ and ‘full of festive fun’.

Actress Sheila Hancock was next to try and impress the judges with her partner Ian Waite. In her intro VT Sheila said she loved new challenges even though she’s 79 years old. Ian was full of praise for Sheila and revealed they were doing a lift even though they aren’t supposed to. Dancing the Foxtrot could Sheila win over the judges? Craig called it ‘classy, graceful and warm’ saying he couldn’t believe she was 79. Darcey said Sheila melted her heart and had a great top line. Len said it was like mulled wine ‘warm, smooth and satisfying’. Bruno said Sheila’s acting skills were impeccable and went on to say she’s proven that age is nothing but a number.

Footballer Fabrice Muamba danced next with his partner Aliona Vilani. Earlier this year Fabrice almost died after suffering a heart-attack mid-game but he’s back fighting fit. He said in his intro VT that he could never have imagined he’d be on Strictly. For his performance tonight Fabrice danced the Salsa. Is he as good on the dancefloor as he is on the pitch? Darcey said Fabrice’s performance was extraordinary after all he’s been through. Len said Fabrice was ‘baking and shaking’ commenting ‘well done’. Bruno said Fabrice had the moves and grooves. Craig said he was loving the amount of rotation in the routine.

Comedienne Katy Brand took to the floor next with her partner Anton Du Beke. We already know that she has rhythm thanks to that stunning Beyonce routine she did on Let’s Dance For Sport Relief. In her intro VT Katy seemed to be having a great laugh with Anton but we’re not sure she did much actual training. Tonight she danced the Viennese Waltz but could she pull off the sophisticated routine? Len said Katy’s movement was lovely and fluid. Bruno said Katy’s turns were beautiful whilst Craig said it had a lovely amount of flow. Darcey said the dance was beautiful calling Katy graceful.

The last to dance tonight was Blue Peter’s Helen Skelton with her partner Artem Chigvintsev. In her intro VT Helen admitted that she often says yes to things without properly thinking them through. She’s certainly done some amazing things on Blue Peter. Helen revealed that Artem isn’t as mean and moody as people think he is in the training room. Helen danced the Jive tonight hoping to conquer the dancefloor but did she manage it? Bruno said Helen finished the show with a ‘sparkler’ of a performance. Craig said Helen’s turns were phenomenal and he loved the cartwheel. Darcey said the content was great but wished there had been a bit more action. Len said it was ‘sharp and tasty like a pickled walnut’.

The studio audience voted for their favourite performance and as with the usual series their votes were combined with the judges scores to determine the winner. Who picked up the festive trophy?

JB Gill was the winner with his partner Ola Jordan. He topped the leaderboard and clearly the studio audience loved him too. Will he be back for a full run on a future series? We’ll have to wait and see.

Stars from Strictly of old took to the dancefloor once again for a group dance to close the show. Colin Jackson, Kelly Brook, Natasha Kaplinsky, Rachel Stevens, Chris Hollins, Russell Grant, Ann Widdecombe, Chelsee Healey and Tom Chambers returned especially for the Christmas show. They were also joined by the stars of the 2012 series.