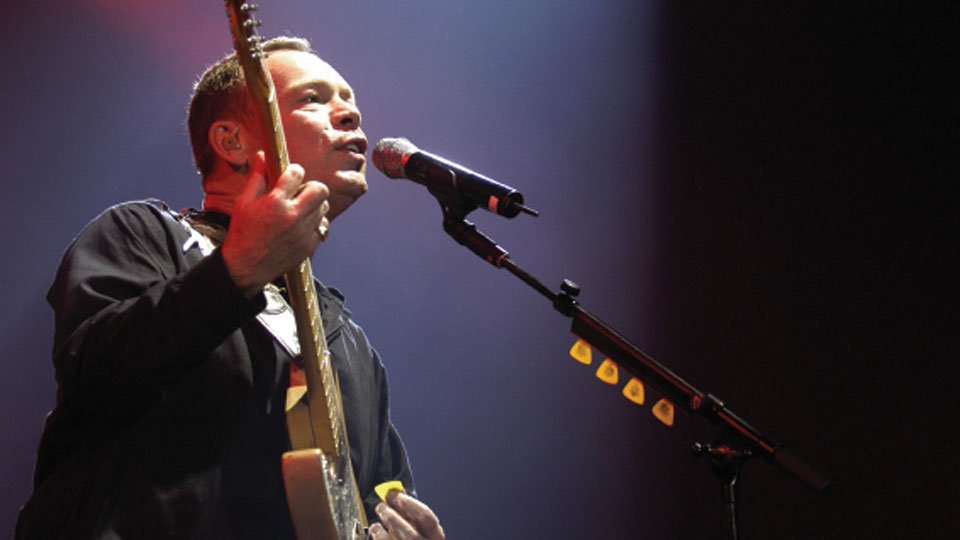 Ali Campbell has been releasing records for almost thirty years and he has had an incredible career. As lead-singer with UB40, Ali sold millions of records and brought reggae music to the masses, making it accessible to all.

More recently, Ali has been a judge on New Zealand’s Got Talent and for the last four years, he has been releasing his own material (sans UB40).

We caught up with Ali, who was briefly in the country for a show at the 02 Arena. Ali was one of the most down to earth men that we’ve ever met and very humble – not an easy feat in today’s music industry and it’s even more impressive, considering how long he has been around in the music industry. Here is what happened when we caught up with him.

Hi Ali, how are you, keeping busy?

I’ve been really busy, yeah! I’ve only been back in the country for twenty-four hours. I’ve just come from New Zealand, where I’ve been living for the best part of three months, because I’ve been doing New Zealand’s Got Talent.

How did you get involved in being a judge on ‘New Zealand’s Got Talent’?

A lady called Anabelle used to work for UB40 and Virgin records and I’ve known her since we’ve been going to New Zealand, which is for nearly thirty years now. They were looking for people to be judges and she put my name forward for it. I thought to myself: yeah, I’ll take that. For one reason and for one reason only and that was so that I could be living in New Zealand for three months and working only one day a week and I thought to myself: that would be a nice way to see New Zealand.

Did you get a chance to travel and see a lot of the country whilst you were there?

Yeah, I was all over the place. I’ve been spending a lot of time in Auckland, as I’ve got friends there and we’ve been to some events. I went to the first mixed martial arts event ever staged in New Zealand, which was pretty cool. My wife and kids came over for the last five weeks that I was out there. I took them down to Christchurch, because we live in Christchurch in England and the kids’ school is twinned with the one in New Zealand. I took them to see the earthquake damage and we got the train across to Grey Mouth, which is across the South Island and to Arthurs Pass and the Alps, which was nice and I’ve been generally spending time around Auckland, it’s been great.

What did you think of ‘New Zealand’s Got Talent’, were there any stand-out acts for you, were you impressed with who you saw?

What do you think of talent shows in general, such as the ‘X Factor’, do you think they are helping or hindering the music business?

I think Simon Cowell has completely manipulated the charts, you know. It’s dreadful what these programmes such as the X Factor and Fame Academy have done. But it’s done, the damage has been done. It’s now a case of – if you can’t beat them, join them, really.

What do you think of the music industry today? Has it changed much since you started out in the music business?

It’s completely changed. It’s absolutely different. I was asked to give people advice with the show and I was thinking that I’m not the one to give advice to them now, you know? My job was to sell CD’s, as well as do live concerts and of course, you can’t really sell CD’s anymore, with downloads dominating the industry. It’s got to the point where they’re stopping making CD players, you know? But in any business, there will be a huge change every ten to fifteen years. New formats always replace the old, video killed the radio star! As a CD seller, it’s the end. I’m lucky that I’ve got a great band and I can play live, but a lot of people have disappeared and it’s sad. The ones that relied on CD sales have all gone.

We hear that you’re in the process of recording a new album at the moment, how is that going?

Yes, I’m trying to find a slot to fit the recording in, now that I’ve stopped filming for a bit. What we want to do is, to get back into the studio and carry on with the album, which is going to be fabulous. We’ve got some amazing covers  that people would never have dreamt of. I’m good at finding obscure songs and covering them. I’ve got a good feeling about it the album. I’m not working with Sly and Robbie on this album – I’m working with my dep band, they are great to work with and very exciting and I’m excited to get the work down.

You famously champion reggae music, why does it excite you so much?

With reggae, there are so many different types of reggae, so many different styles. I’ve travelled all around the world, if you go to Africa or Hawaii, the basis of all this contemporary music is influenced from reggae and djembe beats. Everyone from J-Lo to the people who are in the charts these days, it’s all made up of djembe beats and it boils down to that reggae is the most influential music in the world and it’s so exciting.

You’ve been travelling around the world so much lately, is it good to be back in the UK?

It’s lovely to be home actually, you know – it’s always nice to come home. I love the house we have here in the UK and where we live. The kids are happy to be back too, as they’ve been away from home for a while.

You’re in the UK at the moment and you played a gig at the O2 Indigo on Friday. What can people expect from your latest tour?

It’s a show of hits, I won’t do the UB40 hits which I wrote, but I’ll do the covers that we were famous for, such asKingston Town; Red, Red Wine and I Can’t Help Falling In Love and some of my original songs in there.  It’s probably the only one time that people will get to see these sets of songs together. We’ve got a great band with loads of different experiences and some very talented musicians playing.

How does it feel to have your own show, rather than with the band UB40? Are you used to performing your own material now, or does it still feel ‘new’ to you, in a sense?

It does feel new in a sense, as it’s a totally different experience. It’s wonderful, as it is new material and it’s exciting, it feels very, very fresh.

Who is the warm-up for your current tour?

I haven’t got a warm-up act as such, but instead I’ve got a DJ playing reggae songs. That will set the scene for the evening and warm the crowd up and it sets the right kind of ambience for my show.

It’s a bit different, because it’s a home crowd and I know everybody there. I’ll have my Mum in the audience and she’ll be saying: what’s he doing there, why is he dancing like that? Ha-ha! It’s good fun.

A Red, Red Winery tour would be good. We could take the tour to South America, South Africa, Australia and New Zealand, I think that would be nice. A bit of reggae music and vineyards! You can come if you like.

I’ll be finishing recording the new album next year, New Zealand’s Got Talent will be back – I haven’t signed anything as yet, but that’s a strong possibility as the show was such a success and I’ll be doing what I always do, which is a lot of touring. If I’m not touring or travelling, I find myself twiddling my thumbs thinking what do I do now? Ha-ha. It’s going to be good.

Advertisement. Scroll to continue reading.
In this article:Ali Campbell, UB40