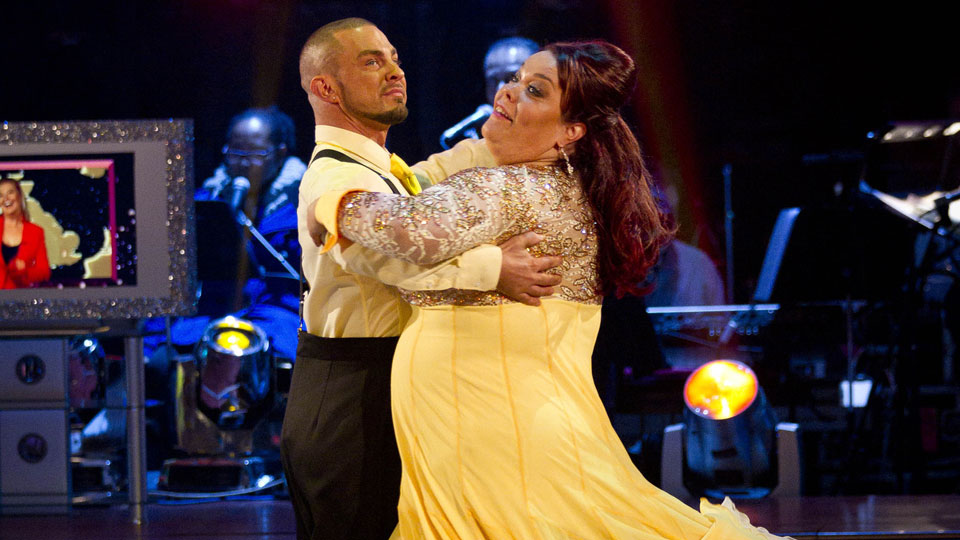 Can you believe there’s only three more weeks of Strictly Come Dancing left this series? Where has the time gone?

Last weekend saw Strictly professional Robin Windsor break his week 9 jinx by sailing through to week 10, the quarter-finals, with his partner Lisa Riley. Team RiRo are definitely the people’s favourites but can they go all the way to the final?

In our weekly update we talk to Robin about last week’s Quickstep, find out what all this fusion dance talk is and discuss the Strictly final.

How did you find last week’s Quickstep?

It was very fast and we were both struggling with a bit of a chest problem. Lisa as always, dressed in canary yellow, brought a ray of sunshine to everyone at home on a very miserable winter day.

It was Lisa who took a tumble this week. What happened there?

During rehearsals every time Lisa had done the flip over onto the sofa it had gone perfectly. Of course on live TV the chiffon dress on the leather material of the sofa meant that Lisa just slipped right off. I shouldn’t have laughed but I couldn’t help it, it was just so funny.

You could see it on Len’s Lens on the results show. They actually did a big close-up. As the true professional Lisa is her face did not change once. If that was me I would have gone into panic mode and pure embarrassment but Lisa just carried on.

Another week of great comments, how did you feel about that?

The judges absolutely loved our Quickstep. They just loved the vitality and the fact that we can bring a big smile to people’s faces on a Saturday night. It’s absolutely fantastic.

My jinx week is finally over. I’m now onto week 10 which is the furthest I’ve ever made it in the competition so I’m extremely happy. I figure there’s only two weeks after this week to go. I don’t want to have come this far and not make it all the way.

It is really exciting. I was getting really nervous because we were both sick last week and I thought  ‘it’s my jinx week, it’s going to happen and it’ll all be over.’ It’s thanks to the judges and the general public who have kept us in and made me a very happy boy.

What do we have coming up for this week’s live show?

This week we are dancing what is known as ‘the fusion’ week. We’ll be dancing the Cha Cha and the Tango. Our name for the dance is the ‘Cha Chango’.

Can we expect another dose of high-energy and fun?

You can expect two very different dance styles in one dance. We’re going to have very serious Tango and then we’ll have a fantastic Cha Cha.

How is Lisa coping with learning to mix the two styles?

We’re lucky that we’ve done both of these styles before. Cha Cha was way back in week 1 so we’ve gone for a lot more complicated choreography to show off Lisa’s technique and what we’ve been working on this week. Again with the Tango it’s a much more complicated piece of choreography and we want to show where and how Lisa has improved from week 1 through to week 10.

Did you choose the Cha Cha because that was the dance that proved everyone wrong and made them take notice of Lisa as a serious contender?

We chose the song first and then decided to what to dance to it. We’re dancing to Abba’s Voulez Vous and it was quite apparent straight away that Cha Cha and Tango would be the dances to do to this song.

Have you had any opportunity to check out your competition yet?

At this point we haven’t got time to worry about anyone else or what they’re doing. We’re just concentrating on us and making sure that we can get a good dance done and produce a good dance on Saturday night.

At the moment we are feeling pretty confident. It’s coming along really nicely. There’s a couple of bits and bobs happening in the routine and at the moment we’re going to be ending with something very special yet again.

How are you both feeling this week? Obviously last week you were both really unwell…

Both of us are feeling much better. I’m still coughing and spluttering. It’s a little bit hard to shake this because we haven’t actually stopped. We’ve had to continue right through. I’m still taking medication and getting better day-by-day so hopefully by the weekend I’ll be back to my normal self.

Who would you say is your biggest competition at this point?

I think the person at the moment that is the strongest competition is Dani. She’s come along leaps and bounds. I’ve got to say that the Viennese Waltz that Vincent choreographed last week was one of the best Viennese Waltz choreographies that I’ve ever seen on Strictly. I thought it was absolutely fantastic and Dani performed it absolutely beautifully. She deserved a lot more than she got for it.

Tell us what it would mean to get through the quarter-finals this weekend and into the week 11 semi-finals.

To make it through to the semi-finals would be absolutely fantastic. It’s two dances for that week. If it all goes according to plan then we’ve got two amazing dances for everybody at home and all of our fans. We just really hope that we can perform them for everyone.

Basically if people want to see you and Lisa in the semi-final they just need to pick up the phone and vote for you don’t they?

Yes. It’s all down to the public now. The judges will have their say and their scores of course but ultimately it’s everyone at home that can make a difference. We just want to be there, make everyone happy and enjoy what we do.

‘Strictly Come Dancing’ continues on Saturday night at 6.50pm on BBC One and BBC One HD. You can watch Robin and Lisa perform the Quickstep on last week’s show: