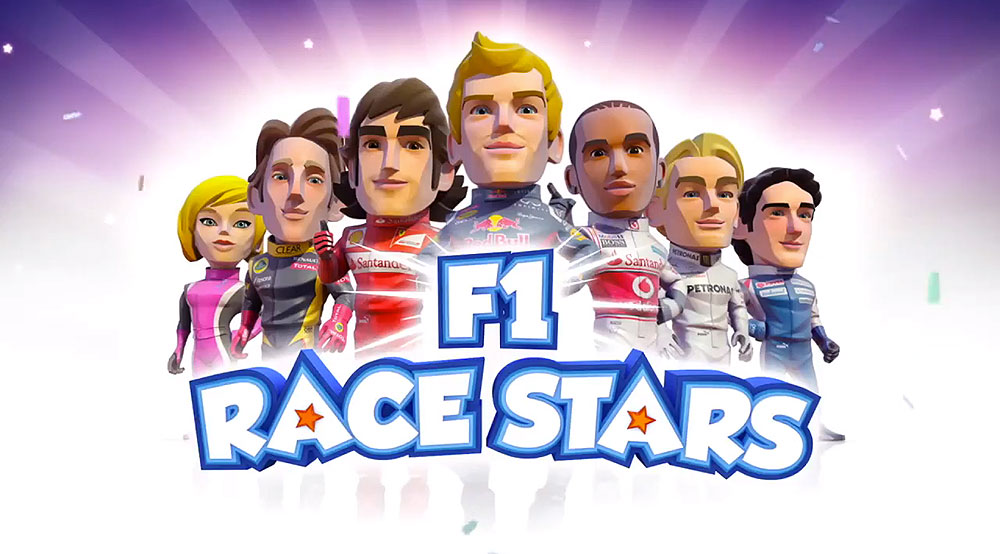 Codemasters have made quite a name for themselves over the past few years as one of the top studios to produce racing games. Most of what they produce tends to be based around realistic physics and graphics while leaning more towards simulation than pure arcade fun. Their most recent release was F1 2012 which can be a punishing game for those new to the genre. With F1 Race Stars they have produced a very different game aimed at players of all skill levels and ages.

If you took the Formula One license and mixed it up with Mario Kart the result would be F1 Race Stars and this is what Codemasters have done. Gone are the photo-realistic graphics, perfect physics and accurate tracks and cars. Instead these have been replaced with a highly stylised cartoonish look that is geared towards fun arcade-style play.

The real Formula One drivers feature and they are presented in the same cartoon style. Each one is instantly recognisable as their real-life counterpart. When racing you can choose to use any of the drivers or alternatively you can opt for your Xbox LIVE avatar. The animations on the drivers are hilarious and really over the top. The way they act at the start of the races when lined up on the grid as well as on the podium at the end of races is brilliant fun. Each team in the game is granted their own special ability and it’s possible for team mates to work together during a race.

The game can be played solo, with up to three friends locally in split-screen or online with up to eleven opponents. You can jump straight in and setup your own races or go for the career mode which gives you 30 championships to win for a total of 90 trophies. The races feature a variety of different modes from standard races to elimination and an interesting refuel mode. In refuel you need to constantly collect fuel to keep moving but you need to be careful how much you carry as more fuel equals a slower car.

The game features 11 circuits to race on which are set in the same locations as the real tracks. Some features of the real tracks are present but most of the tracks are more like crazy theme-park rides with loops, jumps and boost areas. Each track also features multiple paths and a couple of pit stop areas. If your car becomes damaged you go slower so must drive through the pits in order to repair which also loses you a little time. Circuits have unlockable shortcuts that can be opened up by finding a key around the track.

The game does play a lot like a Mario Kart game with the fun track designs and simplistic handling model. However one big difference is that the developers have decided to try and stick to a Formula One like experience. This means that things like slipstreaming your opponents is possible but drifting is not. Cornering requires good track positioning and taking the racing line to hit a corners apex. It also demands good use of braking and accelerating at the right time. Compared to the karting games you might have played this takes some getting used to and the braking almost spoils the racing fun at times.

To make up for the lack of drifting the game makes use of the Formula One KERS ability which in real life turns the energy lost via heat during braking into acceleration boost. In the game certain zones allow you to charge up the KERS boost up to 3 times for a temporary boost in speed.

Another area that borrows from Mario Kart is power-ups which are lined up on the track and grant a random power-up. These can be activated when needed and feature many Mario Kart style power-ups such as blue bubbles you can drop to stop opponents, and others which you can shoot forward or backwards to hinder your opponents. Other power-ups summon rainstorms to slow opponents down, grant temporary boosts or even summon a safety car to bunch up the field.

Online the game plays much the same as locally with a variety of modes and playlists setup for you to tackle. The racing is definitely most fun against real people so if you don’t have people to play locally then you should definitely get online for some races. Like other Codemasters Racing titles F1 Race Stars features RaceNet support which allows you to track all your games and rivals as well as signing up for community events.

The game looks like it will get more tracks via DLC in the future. Currently there are special themed DLC packs available that allow you to customise the game such as princess or monster packs.
F1 Race Stars is a fun racing title that is perfect for families to play but it’s definitely not one for serious racing fans. It’s an interesting use of the Formula One license but tries too hard to emulate the Mario Kart titles. It’s also a surprise to see this get a full priced retail release as it feels like it would have been better suited as a cheaper downloadable title.