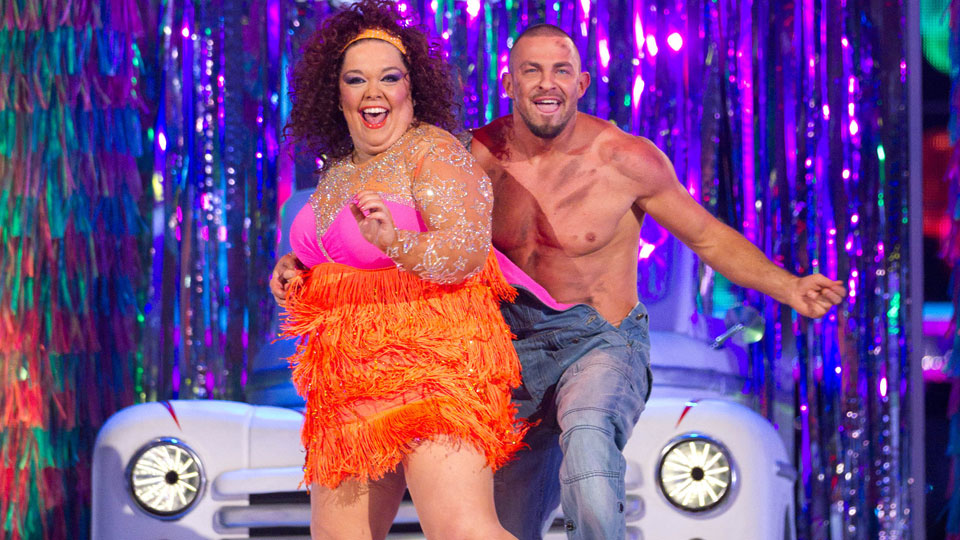 Team RiRo aka Lisa Riley and Robin Windsor are on top of the world after wowing Wembley last week during the Strictly Come Dancing Children In Need special.

Bringing the crowd to their feet with a fantastic Samba, and surprising us all with Lisa’s incredible splits at the end of the routine, Team RiRo are definitely the people’s favourites this year.

In our weekly chat with Robin Windsor we talked about the Wembley experience, found out all about this week’s Rumba and talked nerves as the end of the competition is in sight.

You performed the Samba at Wembley last week. How was it?

The Samba last week at Wembley was absolutely exhilarating on every single level possible. Not only did we get to open Wembley with our Samba but we got the biggest applause and appreciation of the night. The audience would just not stop clapping and cheering. When Lisa hit those splits, I think the whole country jumped up off their sofas and spilt their dinner everywhere.

It’s another example of how she’s just defying everyone’s expectations isn’t it?

I knew towards the beginning of the live shows that Lisa could do them. I thought we should save them for something special and when it got to Wembley it was just the most special moment that there is so we thought ‘let’s do this here’. The whole country just went nuts and she’s proving everyone wrong again. She can do whatever anyone else can.

It’s been such a hard week on the run up to Wembley that everyone was extremely tired and to get such appreciation for our dance just made us both a little overwhelmed. Both of us were a bit teary. It just goes to show that we’re all human and we all have these feelings.

And you didn’t slip this week. Well done!

No! I was very lucky because I had trainers on to dance this week so I was thinking ‘there’s no way I’m going to go over’.

What would you say is your favourite memory from the Wembley show?

My favourite moment by far was the moment we finished the dance. The audience were just so appreciative and we got our second joint highest score to date – four 8s for our Samba.

This week you’ve got the Rumba. Are you aiming to beat your Samba score?

We’re going to do our best to outdo our Samba with our Rumba. Of course the Rumba is a really, really hard dance for any celebrity to master. We’ve had quite a tough week and it’s hard for Lisa because we’re taking away all the camp and all the fun. It’s a real serious, romantic, beautiful Rumba.

Is Lisa finding it hard to get back into serious mode?

No, Lisa is adapting to being serious very well. It’s the timing that’s difficult. I’ve picked a song, As If We Never Said Goodbye by Barbra Streisand, that’s a really tough song for any professional to dance to because it’s very slow at the beginning and then it speeds up a bit. Lisa’s been struggling with the timing because of that. That’s been our focus this week as well as footwork.

You’re also continuing to work on Lisa letting you lead more. How’s that coming along?

The premise of ballroom dancing is a man leading a woman around the dance floor and Lisa does like to lead so we’ve been working so hard this week on me leading Lisa. She’s actually starting to follow. Fingers crossed that that then continues throughout the dance.

How is Lisa getting to grips with the routine overall then this week? Is she enjoying it?

Lisa’s really enjoying the Rumba. It’s a completely different dance to anything we’ve done before. It’s not as crazy and fun or as big and loud, it’s all subdued and romantic. It’s a little hard for us to be romantic with one another because we just laugh at each other all the time.

Can we expect a typical Team RiRo twist?

We’ve got a nice beautiful ending. We’ll put it that way.

Are you getting nervous now as it’s week 8 this week and the past two years week 9 has been your exit week?

Obviously I’ve been knocked out at week 9 the past two years and I want to go one better than that this week. Of course I’m getting a little bit nervous because I’ve got my heart set on doing that. The competition is just so strong and after this weekend there’s only four weeks to go. We’re just going to keep pushing and pushing and pushing to try and get as far as we possibly can.

What message do you have for Team RiRo supporters this week?

On behalf of Lisa and myself I just want to thank all the Team RiRo supporters for all their support so far. It’s been absolutely fantastic. We’re doing it for you guys. We’re performing for you as you’re the ones picking up the phones and voting for us. We can’t thank you enough and we’ll do you proud this week.