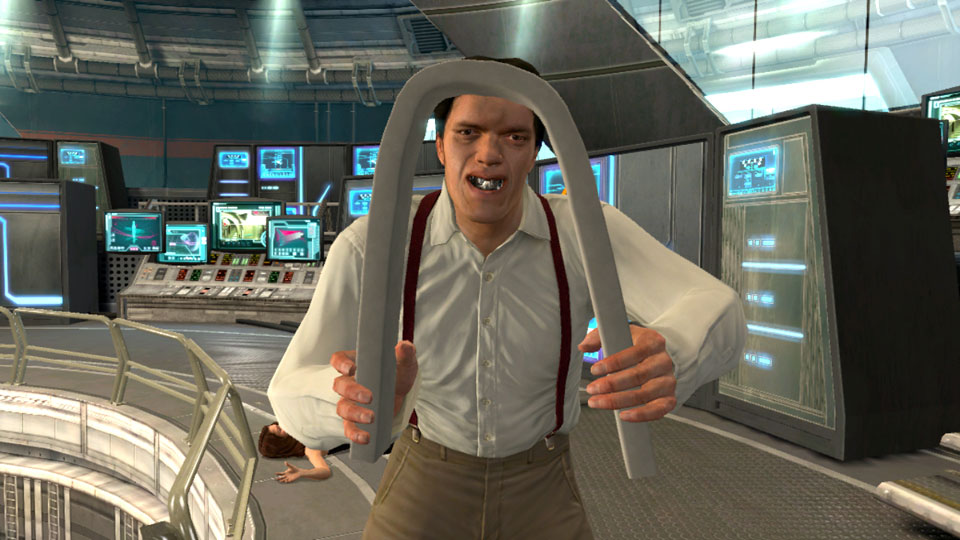 With Skyfall taking the cinema box office by storm and the James Bond movie franchise reaching its 50th anniversary,007 Legends is the game tie-in designed to send the hearts of Bond fans pulsing with anticipation.

Taking aspects of Skyfall, but also incorporating missions based on five of the classic movies from all the previous incarnations of Bond (Goldfinger, On Her Majesty’s Secret Service, Moonraker, Licence To Kill and Die Another Day), 007 Legends aims to be a James Bond greatest hits through a game that incorporates espionage and action.

It only partially succeeds.

A large part of the problem is that the actual game play is limited to protracted set-pieces. These are loosely woven together by large chunks of protracted linking narration that shoehorn in as much of each film’s storylines as possible whilst horribly holding up play. Worse still are moments such as defeating villains and escaping from their lairs that are accomplished through narration rather than actually playing your way out of trouble.

Whilst Daniel Craig has emerged as one of the better Bonds, it’s incongruous to see him facing off against Pussy Galore and Goldfinger in the first mission. The stories have been updated to the present day, too, so Bond extensively employs his biometric scanner during his search of Goldfinger’s facilities. Such anachronisms will probably sit more comfortably with casual fans of the franchise. The updated setting seems to be as a sop to introduce technology to help Bond in his missions, but opening doors, safes and combination locks is routine, not varying between missions, and after a while becomes tedious.

The game play in itself is a little difficult to get to grips with at first. Aiming the various weapons is generally inefficient, and there’s a necessity to reload tediously regularly. This is further hampered by the close proximity of the option to holster your weapon and study your watch or phone instead. It’s slightly frustrating for the first half-hour of play to be faced with heavily armed guards only for Bond to keep looking at his watch as if wondering how much longer he has to work until clocking off time.

One-on-one combat with enemies is perhaps the most poorly conceived aspect of the game. The action moves into slow motion, and you’re directed to press particular buttons to defeat your opponent. It’s far more satisfying to batter the baddies at full speed, using whatever combination of flailing arms and legs you choose yourself. This is never more disappointing than in defeating henchmen such as Odd Job and Dario.

Whilst these criticisms are sizeable downsides, 007 Legends is not a game without merit.  It’s fairly good at presenting environments for you to wander around, and there’s a great sense of scale to the villains’ lairs. You even get to float around in space with the moon behind you when you get to Moonraker. Another plus point is the faithfully reconstructed movie landscapes. Blofeld’s snowy HQ in On Her Majesty’s Secret Service is accurately reproduced (though you fight the wrong Blofeld – it should be Telly Savalas but looks a lot more like Donald Pleasence); and the South American landscape of Licence To Kill is readily identifiable. Some of the actors involved in the movies, including Judi Dench, Michael Lonsdale, Richard Kiel (Jaws) and Robert Davi have supplied their voices to the project. The telling absentee, Daniel Craig (presumably as Bond has by far the most lines) is capably voiced by sound-alike Timothy Watson; and the strength of the cast adds to the appeal of the game.

There are also alternate ways of playing the game. There’s the usual option of single player and multiplayer, but you can also select different levels of difficulty to play at. I’d definitely advise selecting the easiest option, at least for the first play through.

It’s difficult to judge where the appeal for 007 Legends will lie the most. For non-Bond fans, there are plenty of better action games on the market. Bond fanatics will likely lament the aspects of the game that are either misjudged or missed opportunities. Ultimately, most players will likely conclude that it’s an average game that frustratingly falls short of reaching its full potential.

Sadly 007 Legends just doesn’t live up to the hype of the 50th anniversary of the franchise and resounding success ofSkyfall. It’s not a bad game, but it feels rushed, is a touch repetitive and is hit-and-miss in keeping you hooked in the game play. It’s not hard to lose interest after a few missions.