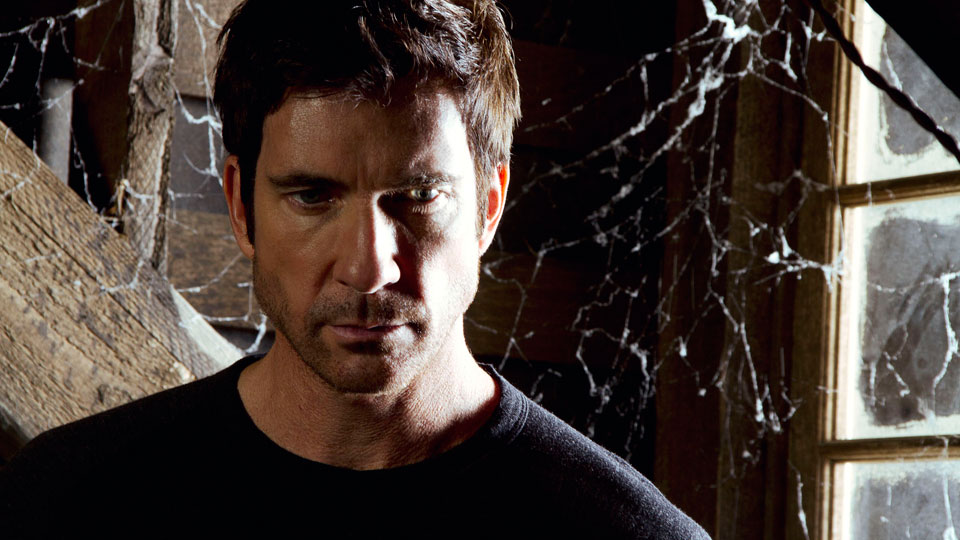 Psychologist Ben Harmon (Dylan McDermott) moves his wife Vivien (Connie Britton) and their daughter Violet (Taissa Farmiga) to Los Angeles following the fallout from his affair and the stillbirth of the couple’s second child. After moving into their newly renovated mansion, the Harmon’s soon discover creepy goings on and become wary of  busybody neighbour Constance Langdon (Jessica Lange) and her daughter Addie (Jamie Brewer). Whilst Ben and Vivien try to rebuild their marriage, Violet becomes friendly with disturbed loner Tate (Evan Peters) and the darkness of the house’s past threatens to change the family’s lives forever.

American Horror Story was one of the breakout new shows of 2010. Created by Nip/Tuck and Glee masterminds Ryan Murphy and Brad Falchuk, the show is one of the scariest and most violent on TV today. Over the first season’s 12 episodes American Horror Story pulls out all the stops to offer a scary thrill-ride full of twists, turns and shocks. Several times our jaws hit the floor and we couldn’t quite believe what we were watching. What begins as a seemingly fluffy ghost-story inspired series, soon turns into something much darker and altogether more sinister.

Each episode we learn more about the house the Harmons have moved into, dubbed ‘Murder House’, and as well as regular hauntings there are plenty of twisted antics going on. The Harmons acquire housekeeper Moira (Frances Conroy) who appears as an old woman to Vivien but a sexually liberated young woman (played by Alexandra Breckenridge) to Ben. How do they see the same woman as someone completely different? That’s for us to know and you to find out. The family also become targeted by sinister burns victim Larry (Denis O’Hare) and Ben’s former mistress Hayden (Kate Mara).

The casting in American Horror Story is what makes the show such a revelation. Dylan McDermott reinvents himself as the patriarch of the family whilst Connie Britton is simply wonderful as his put-upon wife Vivien.  Frances Conroy moves away from the mumsy image she had in Six Feet Under for a rather naughty performance and Taissa Farmiga brings a suitable amount of angst to the screen as the Harmons’ depressed daughter. Evan Peters makes an impression as Tate and his performance is intense and quite haunting. However it’s Jessica Lange that’s the real star of the show. As Constance she gives a real powerhouse performance and it’s no wonder she’s collected awards for this role. She’s absolutely mesmerising, creepy and affecting.

Extras on the Blu-ray release include a featurette taking you behind-the-scenes of the show, an audio commentary on the pilot episode, a tour of The Murder House, a featurette on the ghosts in the show and the making of the rather scary title sequence.

There’s not much more we can say about American Horror Story without giving too much away. The success of the show lies in its unexpected twists and turns and we don’t want to ruin any of them for you. If you like your TV scary, twisted, intense and disturbing then American Horror Story will be right up your street. Just be warned however scary you find this season, the show’s second season American Horror Story: Asylum is proving to be even more terrifying. Enjoy your stay at Murder House.