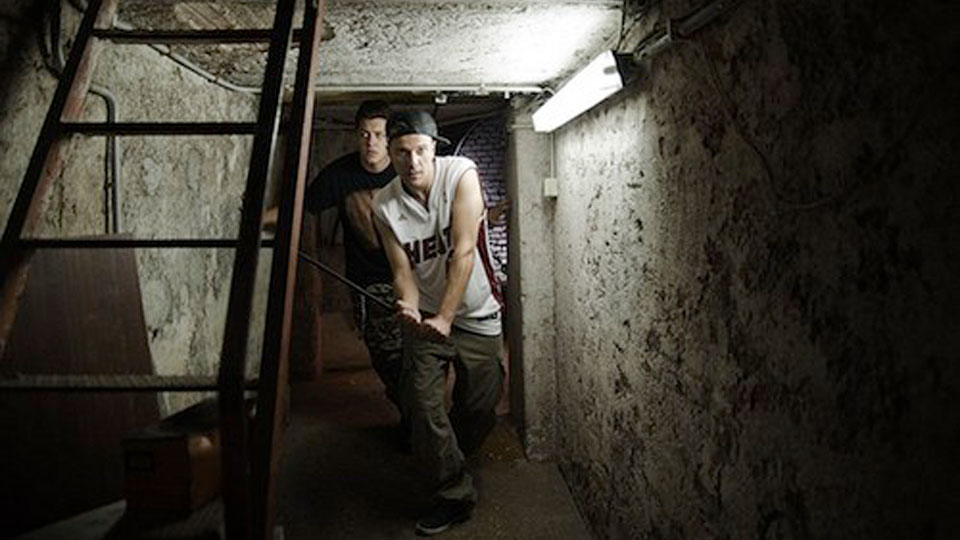 Car mechanic Ale (Domenico Diele) discovers that one of his wealthy customers, Marchese Lanzi (Peppe Servillo) is leaving his luxury villa to go away for the weekend. Deciding it’s too good an opportunity to pass up, Ale ropes in his friends Marco (Claudio Di Biagio) and Simone (Lorenzo Pedrotti) promising them a wild weekend in the lap of luxury. Despite concerns that they could end up in a lot of trouble, Ale assures them that their weekend will be undisturbed. As the three boys make themselves at home they explore the villa and Simone finds that there’s something lurking in the basement. With his friends thinking he’s hearing things, Simone goes down to discover what it is and the trio soon find themselves in serious danger.

Paura 3D is the latest offering from the Manetti Bros who recently won critical acclaim for their sci-fi horror The Arrival Of Wang. Debuting the movie in the UK for the first time today at FrightFest, we finally got to see what all the fuss is about. Is it really as graphic as we’d heard and would it’s controversial plot make us feel uncomfortable?

Taking it back to basics the word ‘paura’ is the Italian for ‘fear’ so instantly you know that it’s going to be an edge-of-the-seat horror that plays on your worst fears. Despite initially being a little slow to get going, Paura 3D soon takes hold of you as you eagerly wait to find out what exactly is in the basement of the villa. We don’t want to reveal too much because doing that will ruin the film for you and the premise is actually one of the strongest aspects of the movie.

With a strong first half, the movie soon takes a turn for the bizarre with unnecessary scenes of exploitation. Much comment was made in the screening about the need for the close-up ‘pussy shave’ moment and whilst it’s not a pleasant scene we can see what the directors were trying to do. Sadly it doesn’t quite work and comes off gratuitous when less-is-more would have certainly sufficed. In the third act everyone falls into a bit of a mess. Despite some clever camerawork and some seriously good 3D, the plot starts to make next to no sense and it all gets a bit ridiculous.

All of the performances in the movie are really strong. Lorenzo Pedrotti makes you sympathise the most with his character Simone and it’s him that really becomes the centre of the movie. Singer Peppe Servillo is superb as the wealthy but sinister Marchese Lanzi. If we ever saw him in the street we’d run the other way. Francesca Cuttica puts in a brave performance as the mysterious Sabrina but is letdown by some shoddy script-work towards the end.

Paura 3D shows a lot of promise but is sadly let down by some bad directorial decisions and a messy third act. There are some moments of genuine tension that has us peeping through our hands to make sure we were ready for anything all that scary. There are a few genuine scares but when the film takes a turn into the torture porn genre we felt very disappointed. Paura 3D isn’t a bad movie, it’s just not as good as it could have been. As we left the Frightfest screening we could hear lots of dissent from other audience members and it seems the movie really did divide opinion.