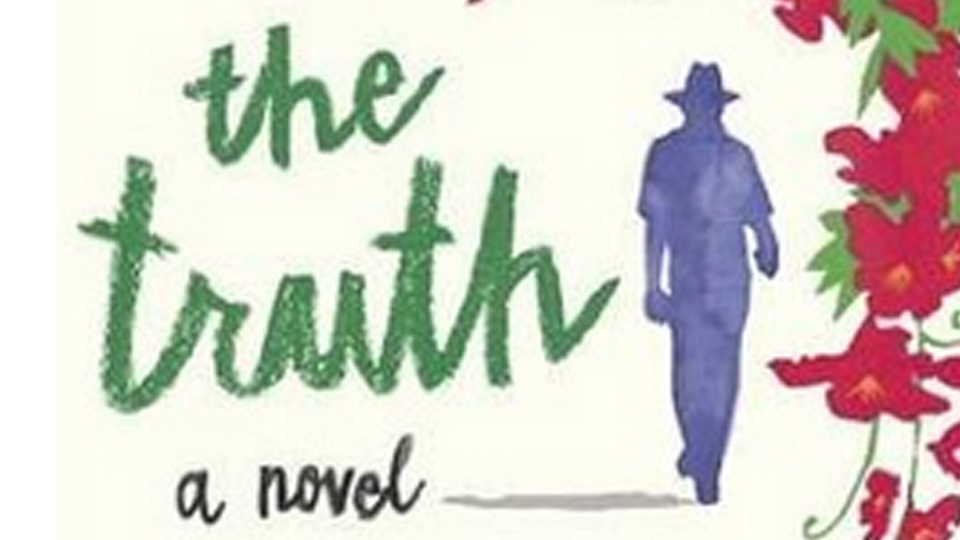 The Truth is only Michael Palin’s second novel. This comes as a surprise considering the literacy of his best-selling travel books and the timelessness of his comedy writing for Monty Python’s Flying Circus and Ripping Yarns. UnlikeHemingway’s Chair (his first novel that appeared in 1994) The Truth concerns important global issues close to the author’s heart that were presumably brought to his attention during his extensive globe-trotting.

Keith Mabbut is a journalistic writer with a social conscience. A while ago he was briefly flavour of the month for exposing a water company whose illegal toxic emissions led to several deaths; but he’s never managed to recapture his early success, his career instead ticking over as a hack for hire. Trying to take his mind off his marital breakup he returns to fiction writing and starts work on his masterpiece ‘Albana’, a trilogy about the dawn of man, which definitelyisn’t a science-fiction novel.

Out of the blue, his agent asks him to pen a biography of the elusive Hamish Melville (not to be confused with Herman Melville, who wrote Moby Dick), an elderly anthropologist and environmental activist loved the world over (except by big greedy corporations) for his campaigning work which protects local communities from eviction by wealthy conglomerates. The only trouble being that Melville’s a difficult man to track down and fiercely private. But with a huge sum of money in the offing  for a guaranteed bestseller about a living legend, and needing something to take his mind from the open wound of his failed marriage, Mabbut soon realises it’s an offer he can’t refuse.

Embarking on his quest to find Melville and pen his exclusive biography, Mabbut travels to India where he attempts to secretly penetrate the inner circle of the enigmatic Melville. There, he witnesses for himself the devastating consequences on the landscape that would result from Astramex being granted permission to mine for bauxite. Melville is a difficult man to find, let alone win over, and standing in the way of multinationals is a lethal game. Both sides are well-armed and prepared for violence. There’s more at stake for Mabbut than delivering his manuscript when he goes in search of the truth.

Palin’s story reads like a Graham Greene novel. It follows the time-honoured magic formula of having a protagonist who is a fish out of water, and a stranger in town. Palin’s backdrop of India is populated by characters our hero can’t trust. Inevitably, there are many humorous lines in the book – I suspect Palin can’t help himself – but they are never intrusive or at the expense of maintaining credibility. Rather, Palin uses deft comic touches to occasionally lighten what is a tense, oppressive and often uncomfortable story world.

The Truth has a cracking tale at the heart of it, and for the most part it’s skilfully told. It takes a while to get to the heart of the story, and a lot of the scene-setting would perhaps have been better drip-fed as backstory later in the narrative. For example it would prove a slicker read if Mabbut had only one child. His daughter Jay enjoys a well-earned subplot which keys in to the main theme of the book – never accept people at face value and the truth is more complicated than you may wish to believe – but his son Sam is extraneous. It’s undoubtedly true that Sam’s appalling self-obsessed stage shows, which poor Mabbut is obliged to support, enduring them with rigid embarrassment, are very funnily described, but the plot wouldn’t suffer from their excision and the story would be tighter. The same effect could be achieved by reducing Mabbut’s over-complicated private life to a more monastic level. There’s also a certain element of heavy-handed exposition, where Palin tells us what’s happening instead of showing us, but this is offset by a delicious turn of phrase and zinging dialogue. Certainly by the final third, the characters and the story demand your attention more than making the dinner or having an early night ever could.

The strength of The Truth is in its characters, who are very well-realised. Mabbut is hugely enjoyable company: essentially a nice chap, a touch overly-idealistic with a strong stubborn streak. It’s hard not to picture Palin himself in the part. Then again Mabbut is idealistically similar to Melville, the crusading environmentalist. Melville, although charismatic and charming, remains deliciously opaque and impossible to pin down to the very end of the book, and one can’t help but think he’s an overtly heroic variation of Palin himself, who seems to be a synthesis between the two characters. The females are well-written too, with Mabbut’s incompatible Polish ex-wife Krystyna, too pragmatic to put up with an idealist for life; and his long-suffering wine-guzzling agent Silla add nuance and alternate perspectives to the narrative.

The themes of the story are prescient and well-developed too. The Truth is designed as a call to arms about the disastrous environmental consequences of large-scale clearing of land, as well as the indefensible human cost on local tribes who are powerless to stop their homes being destroyed and their land ravaged. Palin isn’t naive about progress, he recognises its inevitability, but his anger is palpable over murky government deals at the expense of its citizens. The Truth leaves the reader wanting to do something worthwhile with life and make a difference – which is precisely Palin’s Melvillesque intention.

Ultimately, The Truth is also a comment about the difficulty of the concept itself, and the near-impossibility of unravelling multitudinous shades of grey. Mabbut’s task is cleverly chosen since any number of biographies could be written about the life of any one person and they could all be ‘true’ but paint the subject in wildly contrasting lights. How do we know what people are really like, and what motivates them; and how do we decide which external factors are guiding their actions? Put simply, whose truth do we accept?

The Truth undoubtedly achieves Palin’s ambition for it: it acts as a consciousness raiser about the debilitating effects of powerful companies on local communities and the environment, in this instance in India, and does so through the medium of a cracking good yarn. Michael Palin has proved himself a major talent at many things. Storytelling is another.

In this article:Michael Palin, Monty Python, The Truth, Weidenfeld & Nicolson