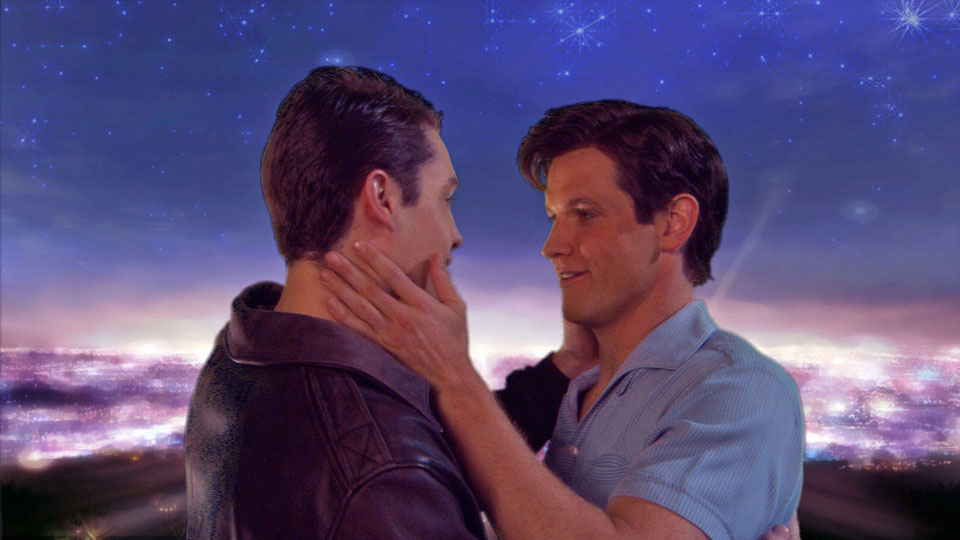 Staying in the closet is one of the things lots of actors do in Hollywood, and indeed all over the world, for fear that their sexuality will ruin or limit their careers. This month we explore that theme in classic gay comedy Straight-Jacket for our June instalment of the aptly named Celluloid Closet.

Straight-Jacket is set in 1950s Hollywood when being gay was not something you publicly revealed especially not when you’re a leading actor. Guy Stone (Matt Letscher) is at the top of the Hollywood ladder, desired by women and imitated by men. Behind the shiny perfect exterior though lies a man who enjoys hooking up with other men as his manager Jerry (Veronica Cartwright) covers his tracks and makes sure no one suspects a thing.

Convinced into a sham marriage with fan Sally (Carrie Preston), Guy can’t keep his sights (or hands) off fellow actor Rick (Adam Greer). As his affair threatens to be exposed Guy has to decide if being openly gay is worth risking his career for?

The subject matter of Straight-Jacket is an all too familiar one with celebrities across the world hiding their true sexuality in fear that revealing it may end their careers. Whilst it certainly isn’t the case for everyone – singer Will Young and actor Zachary Quinto being two good examples – some stars have criticised the way they’ve been treated after coming out. Rupert Everett has long proclaimed that being openly gay has harboured his career.

One of the problems seems to be the perception that audiences can’t believe a gay actor in a straight role if they know the actor is gay. This logic makes no sense. Surely if an actor is good at his/her craft, regardless of their sexuality, they should be able to convince you. After all we doubt that Michael C. Hall regularly kills people like his alter-ego Dexter or that Ian Somerhalder has years of experience as a vampire. This notion is simply ridiculous and short-sighted.

Sadly though we live in a society where outing someone is praised yet we don’t see people desperate to out anyone as straight do we? In Straight-Jacket Guy’s attitude isn’t one of fear but one that believes his star power will prevent the truth from ever being revealed. He receives a bit of a shock when the scandal around his sexuality threatens to ruin his career but a smart move by his manager straightens things out (pardon the pun).

Matt Letscher is superb in the lead role of Guy Stone. Loosely based on Rock Hudson, he plays the character with a confident swagger that both endearing and ultimately his downfall. We’re used to seeing Letscher play supporting roles in shows like Entourage, Eli Stone and Brothers and Sisters but here he proves he has leading man potential. His interaction with both True Blood’s Carrie Preston and his on-screen lover Adam Greer is fantastic and he plays both relationships to his advantage.

It’s a sad state of affairs that 8 years since Straight-Jacket was first released, the pressure is still there for gay celebrities to keep hiding in the closet. The way in which the media aggressively outs people is sickening but times do seem to be changing. Recently The Big Bang Theory’s Jim Parsons came out and the announcement was met with barely any reaction at all. We hope one day to live in a world where people are defined by what they do rather than their sexuality. Gay or straight does it really matter? Hopefully one day Hollywood won’t care either and the Guy Stones of this world can concentrate more on what they’re good at and less on hiding who they really are from the world.

Straight-Jacket is available on DVD now through TLA Releasing.