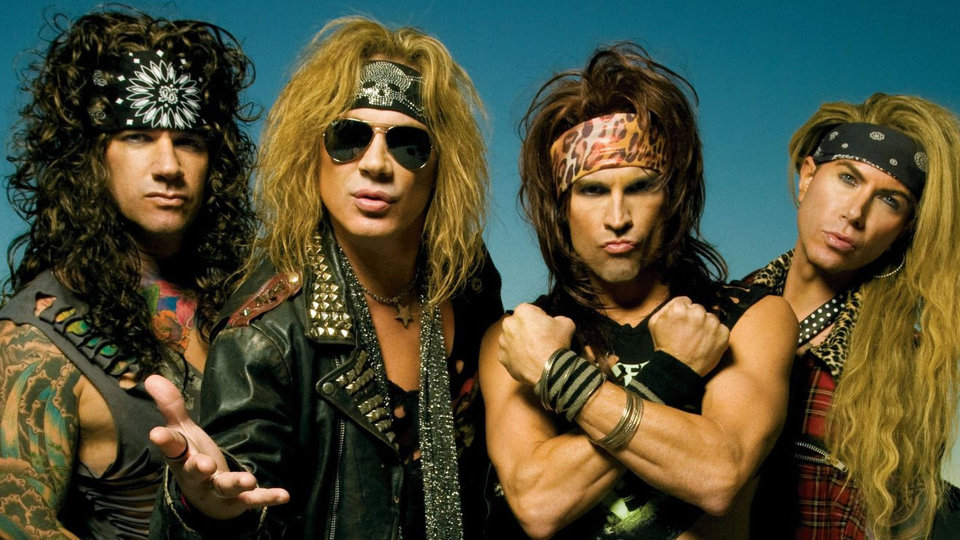 Steel Panther are one of those rare success stories, starting off as a metal spoof band the rockers are now releasing their anticipated second album and getting the same respect the bands they admire got. EF’s Bargi had a chat with Stix on the verge of this new release.

Hi Sarah how are you?

I am good how are you?

Yeah I am good I just got up a little while ago.

I expect a rockstar like you to get up at 5pm everyday!

Well we were in Las Vegas and I didn’t sleep for three days more than 3 hours so my body just decided at some point it was time.

Was that for your residency in Vegas?

Yeah we had a really fun time, there was a festival going on in Vegas and a few mates came down also a friend from Disturbed.

Your album is coming out in the UK soon?

It’s hard to put into how excited I am about this new album, cuz I know what’s on it and I know that once people will hear it they won’t be able to say: ‘God this album fucking sucks!’ You’ll get arrested if you say it cuz you’ll be a liar, a cheat and a thief. Seriously you will not be disappointed!

I haven’t got my copy yet so that makes me look forward to it!

Well you let me know if you don’t get it cuz I will kick someone’s ass otherwise. You need to have one for real.

‘Feel The Steel’ did really well in the UK. Did you expect that kind of success?

You know I don’t think I had any expectations we were just so excited to put a record out. We started as a weekly band and sold out our show for ten years in LA and Universal came to us cuz they realized there is something going on here. We put the record out and had very low expectations. It has exceeded all our hopes and especially since our first show and performing at Download festival that first year was mind blowing.

I saw the footage and it looked mental!

It was I don’t know what bands were before us but our manager went down to the tent before we played and there were maybe 500 people there and when we played there were about 5000 people I am not kidding and the tent only holds 3500 people. It was like a movie like someone decided to make it ridiculous and over the top. By the way our record had only been out for a couple of weeks but people knew the lyrics, which showed us that people were connecting with us. The band after us had about 700 people watching cuz everybody left to go see someone else. It was really surreal.

Our fans in the UK are so devoted and amazing, they accept what we do and like to f**k and party! Haha

Are you looking forward to coming back to the UK?

YES! Our headline show sold within eight minutes, which makes us want to come even more. And obviously not everybody gets the chance to also tour with Motley Crue and Def Leppard. We are so excited and proud to deliver what we got to everybody. It’s really hard to describe how excited I am.

How much spandex can you get on a tour???

I just hope that I don’t find any of my spandex in anyone else’s dressing room without me in them unless it’s a girl or shit is going down!

Have you given much thought of the style of this tour?

Yes its something we’ve been talking about. We have a certain amount of time to play and within that time we want to maximize the rock for people who bought a ticket even if they aren’t there to see us. Even if they don’t like us we’ll get on that stage and make you like us because you can’t deny how bitchin’ we are! I want to play on that stage and people to say: ‘I hate them but now I’ve seen them I can’t hate them anymore’.

How do you describe this album?

It’s more of the same of the first record but it’s a little more grown-up cuz I think we have matured especially a song likeIt Won’t Suck Itself is quite mature.

Do you have any favourites on this record?

I can’t believe you don’t have the record it makes me so mad! There is a song that is going to translate really well live it’s called Gold Digging Whore. Let’s not say that we think all women are gold digging whores this song is quite specific cuz they are out there you agree right?

The song spells out golddiggin’ whore in the middle so I think live it will be an anthem. I think when everyone will come out and spell gold digging whore in wembley it will be amazing. These women need to be exposed for what they are cuz that shit ain’t cool!

For my last question: Squirrel vs Pigeon who wins and why?

Oh pigeon would win, its got the areal advantages! If you think about it the pigeon can just fly off and do what it wants, pick up some stones and bombarded it the squirrel has got no chance!

New Album ‘Balls Out’ is out on 31st October and new single ‘If You Really Realy Love Me’ is out on 7th November.