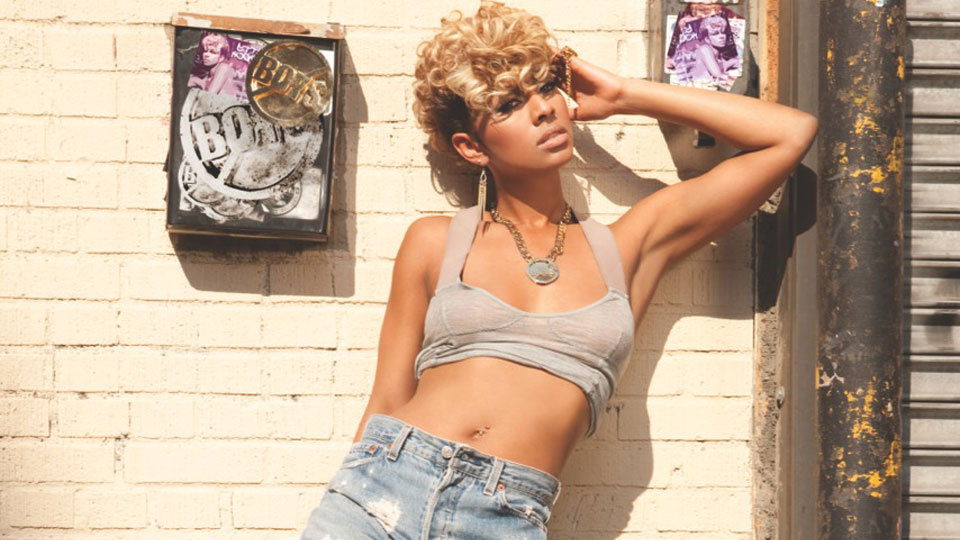 When we last saw Keri Hilson she told us about her hopes to tour the UK before the end of 2011.

Next week sees Keri performing two headline shows, one in London and one in Birmingham, for the very first time.

Last time we saw you we talked about the possibility of doing a UK tour. Now you’re coming over to do just that. What can we expect?

Yes finally! Well it’s pretty aggressive right now. You can tell I’m having fun up there and I’m good to change my show around for Europe a bit. You can still expect it to be pretty estrogen heavy.

Are you excited to be finally getting to the UK to play some live dates?

Absolutely. The last time I was there, and the last show I did there besides the TV stuff, was with Ne-Yo. We did a UK tour with myself and him. We did two nights at The O2 and that was amazing. Now it’s going to be more intimate and I’m ‘headlining’ a small club tour so it’s going to be fun. I love my fans there because they know how to receive an artist. They know how to watch a show and there’s so much energy. I look forward to it a lot.

What are you expecting from UK audiences?

I was talking to a friend over the weekend about how it can be quite hard to win over a UK audience – they boo, heckle, talk over you etc if they lose interest. Is that daunting because you never quite know what you’re going to get?

Oh ok. I’ve never experienced that and hopefully I never will.

What can we expect from the setlist for your shows?

It’s a mixture of both albums. I don’t do too much that is too unfamiliar.

Is there any track that you really love to perform?

Right now Pretty Girl Rock is one of my favourites. It’s the moment the crowd gets most rambunctious. Yeah, I’m gonna go with that.

Absolutely. In the shows so far I’ve been pulling up girls to do the Pretty Girl Rock with me. It’s really fun.

What’s your favourite part of being up on stage?

The energy from the crowd. It’s fun especially over there. If you have a lack of energy, a bad day or your out of focus the energy can pick you back up and you use it to your advantage. I imagine over there it will be amazing.

Have you had any embarrassing experiences on stage so far?

Embarrassingly moments…yeah! Sometimes when I’m cold my nose wants to run and I have to figure out if I can run back to the DJ booth and blow it or wipe it before it starts to move around (laughs). That’s gross but it has happened a couple of times.

Do you ever worry about forgetting your words?

How do you cover something like that up – just sing whatever comes into your head?

It depends. If you’re quick enough then yes but usually something comes out that’s just wrong. They probably think ‘oh she said that the whole time, I thought she was singing this’. I think why it happens is you get used to performing on auto-pilot. Sometimes auto-pilot performing will fail you and you have to click back in to being present there. You know what I mean? It’s easy to do when you’re doing the same show every night for months or you do the same song for years. You begin to do it in auto-pilot and you have to stop yourself, really be present and really be thinking. So I think that’s how it happens.

How do you build up the stamina you need for a tour?

It comes naturally I guess. Physical stamina you have to work out. I work out basically twice a day. On-stage I’m out there performing for 30 minutes and giving it my all and that’s serious cardio. Also earlier in the day I usually get an hour workout and that really helps. I can tell the difference with my show when I don’t work out for a few days.

Shortly after you do the tour your new single ‘Lose Control’ featuring Nelly is released. Tell us about that.

Yes. Well that song was produced by StarGate and it’s one of my favourite songs on the album. It’s also one of my favourite videos from this album. Working with Nelly was incredible, I mean he’s had amazing success – especially in the past – and you see why when you work with him. He’s very, very talented and very professional, and well-liked too.

What have you got planned for when you’re back in the UK. Will you have time to do much else?

I don’t know! There’s not much planned yet. Maybe there will be an off day or two but I don’t think I have that many off days.

You’re a workaholic aren’t you?

(laughs) Hopefully I’ll get to do something.

What would you say it is that you love about coming to London?

How do you cope with the rude Londoners? Londoners really can be pretty rude…

They’re not! Not that I’ve noticed.

It’s probably no different than New York but I’ve not noticed. I guess I don’t encounter the rude ones.

They must just be nice to you Keri.

Maybe (laughs) You know what, it’s not rude. I have a couple of friends from there and you guys are just more blunt. You just have no shelter which is something that people should appreciate. I’m one of those people and I get in trouble with it all the time. I’m very sarcastic which you guys are and I’m very blunt which you guys are. I think I don’t notice because I relate to it. I just say what I feel when I feel it. I think in general that’s cool.

Do you have anything else planned for your UK fans before the year’s out?

I don’t know. Hmm. Well right now nothing but this tour. I think that what’s special for them is that I’m offering this VIP package – kerihilsonvip.com – where they can order an upgrade to their ticket or order the platinum package which includes the ticket and the VIP package. That allows them to come backstage, hang with me, crack jokes and whatever, meet my entire crew from dancers to drummer to DJ – anyone they would like to meet. They get early entrance into the venue and they don’t have to wait in line. So many perks but I guess me being the main one. It’s very up-close and personal so it’s a lot of fun.

We can’t wait to see you on stage in London rocking it. It’ll be amazing.

Yeah, it will be! I’m going to have fun and make sure that everyone has fun along with me.

Keri will be performing at London’s IndigO2 on Tuesday 11th October and O2 Academy Birmingham on Wednesday 12th October 2011.