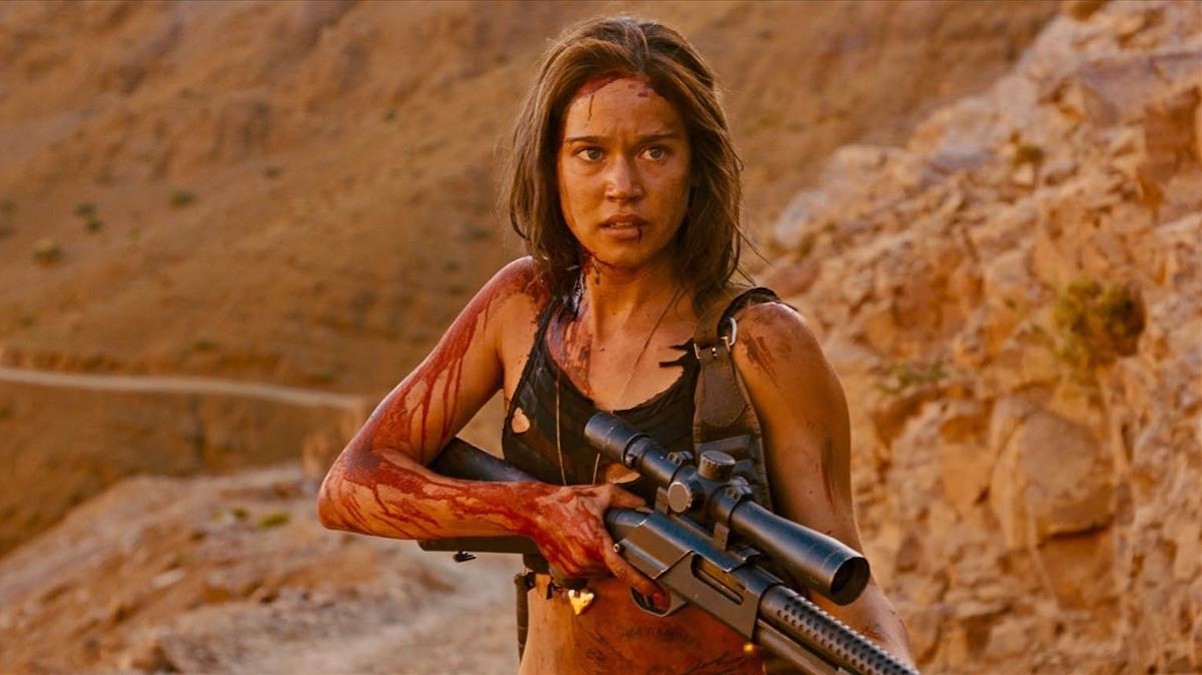 If you missed out on the now out-of-print limited-edition from Second Sight, then fear not, as you can now pick up a standard edition release of Coralie Fargeat’s candy-coloured horror. Her debut feature film ‘Revenge’ is an incredibly stylish and spectacularly violent take on the notorious and often controversial sub-genre of rape-revenge movies. Channelling ‘First Blood’, ‘Kill Bill’, and “Deliverance’, if you’ve got a strong enough stomach, it’s definitely one not to be missed.

Matilda Lutz is Jen, a ridiculously gorgeous American girl, who has been swept off to a secluded holiday home in the Moroccan desert by her rich and handsome lover Richard (Kevin Janssens). When Richard takes a call from his wife, quickly followed by his two hunting buddies Stan (Vincent Colombe) and Dimitri (Guillaume Bouchède) turning up a day earlier than planned, their weekend together is soured. The idyll is smashed, and the scene is set for something truly awful.

If you’re in any way familiar with this genre then it shouldn’t be too hard to guess how things progress. When Richard is out of the house sorting out their hunting licenses, Jen is raped by Stan. Without being explicit, it is a horrifying sequence. Dimitri witnesses the attack, and even though he could intervene, he chooses not to. Then there’s Richard, who returns in the aftermath. He should protect her and seek justice for her, but instead wants to pretend the whole thing never happened. He doesn’t want anything to interfere with his perfectly ordered life.

To say any more would risk spoilers, but you already know what the name of this film is. I’m sure you’ve seen the poster, or the cover art for the blu-ray. Vengeance is exacted on these men, in splashy, stomach-churning fashion. There’s an almost supernatural or mythological feel to the second half of the film. Having dared to be seen as something more than just a sexual vessel, she is punished by men, and must pass through trauma, pain, fire, blood, and maybe even death to rise again and unleash hell on those who have wronged her.

Playfully toying with the conventions of the genre, whilst still delivering all the visceral thrills you would expect, ‘Revenge’ is a provocative and confronting film, told from a distinctly female perspective. Mixing hardcore gore with the lurid visuals, and a surreal trippiness, Fargeat paints a vivid picture of misogyny, male insecurity, and primal feminine power. Matilda Lutz, at the brutal, bloody heart of it all, is simply incredible.

The disc comes packed with all the same extras as the limited-edition release. These include an audio commentary from author and critic Kat Ellinger. There are also exclusive in-depth interviews with Coralie Fargeat and Matilda Lutz, actor Guillaume Bouchède, cinematographer Robrecht Heyvaert, and composer Robin Coudert.