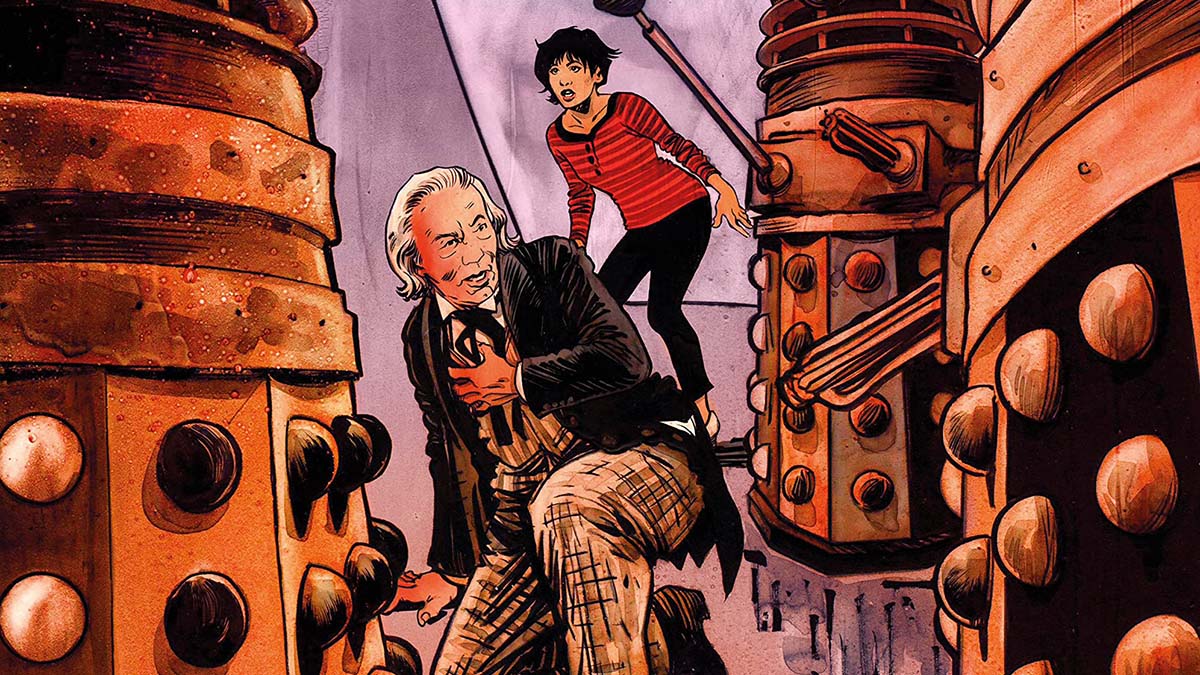 Great ideas have to start somewhere. At the final tally, there were around one hundred and fifty ‘Doctor Who’ stories during its original 1963-89 run. All of them have now been novelised. But it was the second ‘Doctor Who’ story, ‘The Daleks’, that was the first to be adapted into prose. The novel’s first edition was published in 1964, the same year that the final episode of the story was broadcast. It would be some years later that many more stories were churned out at a rate of knots for the range of Target novelisations that would dazzle and delight young readers for years to come. David Whitaker’s novel would be re-published as part of that range in 1973. But it has always stood apart from the other books in the range…

Author David Whitaker was the original script editor on ‘Doctor Who’. He would have read all of the early stories, and clearly took a shine to Terry Nation’s ‘The Daleks’, which was an allegorical morality tale that introduced the Doctor’s deadliest nemesis. It is written in the first person from the point of view of companion Ian Chesterton. It is immediately a good idea not to try to get inside the Doctor’s head in this way. The character has always been too enigmatic and requires viewing through a human prism. Keen to write a self-contained novel in its own right, and having no expectation that his book would spawn a range of over a hundred titles, Whitaker also changed the opening so that Ian is not already part of the TARDIS crew. This deviation from the events on screen can be jarring for readers, but it is an intriguing insight into how a fine writer would choose to imagine one story from the world of ‘Doctor Who’ completely detached from the stories that came before and after it, without any baggage. What’s fascinating to remember is that William Russell and Jacqueline Hill were still playing Ian and Barbara on screen at the time that Whitaker’s novel was originally published.

The first two chapters of ‘Doctor Who and the Daleks’ describe events that can’t be found anywhere else in ‘Doctor Who’s rich and not always coherent legacy. It deviates both from the original story and from the big screen adaptation starring Peter Cushing that followed a year later and clearly didn’t use the novel as a source material. Whitaker decides not to merge the establishing events of ‘An Unearthly Child’, the very first ‘Doctor Who’ story, with the second. Instead, we see a writer’s imagination creating the origins of ‘Doctor Who’ for himself. As such, the opening two chapters are a fascinating glimpse into David Whitaker’s take on the genesis of a legend.

Ian Chesterton, who narrates the whole story, isn’t a science teacher at a school, but rather a rocket scientist. Barbara Wright isn’t his colleague, but a stranger he meets late at night following a car crash. He aids Barbara in finding help for an injured young girl, Susan. This leads to an encounter with her grandfather, the Doctor, and the discovery of a police box on the common that happens to be bigger on the inside than the outside…

Once the TARDIS lands on the dead planet, the events of the novel become familiar to viewers of the original series. As soon as the crew experiences radiation sickness and encounters the ruthless Daleks, they must come to trust one another and become, as the Doctor says, “the perfect team”, in order to get back to the ship and escape. The fascist ideology of the Daleks would become more explicit in later stories, but it’s clear enough from the start. They consider themselves a master race and wish to perpetuate a genocide against the peaceful Thals, who in turn have to be shaken out of their pacifism and resolve to fight the Daleks to ensure their survival. Weighty themes for young viewers, and Whitaker’s intelligently-written novelisation extrapolates the full meaning behind Terry Nation’s powerful story.

Judged as a novel in its own right, ‘Doctor Who and the Daleks’ is a cracking read, especially for younger people. Though of course, as an iconic story and a book that holds mythic status in the minds of many long-standing fans, they will be a key part of the readership of this exquisite tome.

What makes the new BBC Books edition of ‘Doctor Who and the Daleks’ so special is the attention to detail that has gone into producing it. A red hardcover has a dust jacket showcasing some of the remarkable illustrations that form a key part of this book’s aesthetic and commercial appeal. Robert Hack’s paintings are rendered in a style that immediately evokes the 1960s period from which the story emerged. They will remind readers of some of the stylish early ‘Doctor Who’ merchandise such as the Christmas annuals of the time. There is an illustration, varying in size between small, partial, single or double-spread on most of the pages, ensuring that every leaf you turn reveals the prose with a well-embellished background. Indeed, the illustrations have a life of their own and should be savoured aside from the text. The likenesses of the actors is brilliantly captured, as is the programme’s original design work.

Celebrated author and contributor to the new ‘Doctor Who’ series, Neil Gaiman, provides an introduction that encapsulates just how important the novelisations were to old-school fans, and why David Whitaker’s ‘Doctor Who and the Daleks’ is such a special contribution to the show’s enduringly popular history.

My only minor criticism is that the front cover boasts the current (but soon to be superseded) ‘Doctor Who’ logo, an anachronism that jars with the rest of the overtly 1960s’ ethos of the tome. However, brand recognition is a marketing tool, and so one must swallow these details and accept them as the BBC’s attempt to portray early or new ‘Doctor Who’ as all part and parcel of the same glorious legacy, even if a minority of fans, myself included, reject and resent this imposition. In the final scene of ‘Doctor Who and the Daleks’, Ian and Barbara decide upon their future, wondering if they should continue their travels with the Doctor in his TARDIS. It was the start of one heck of a ride. Sadly, David Whitaker’s early death in 1980 meant that he would not realise the full extent of his contribution to ‘Doctor Who’s rich literary history. But his landmark book ‘Doctor Who and the Daleks’ is testament to his talent and his place in the pantheon of great and significant ‘Doctor Who’ writers. This beautiful new edition of ‘Doctor Who and the Daleks’ will look stunning on any collector’s bookcase.

In this article:BBC Books, Doctor Who, Doctor Who and the Daleks, William Hartnell