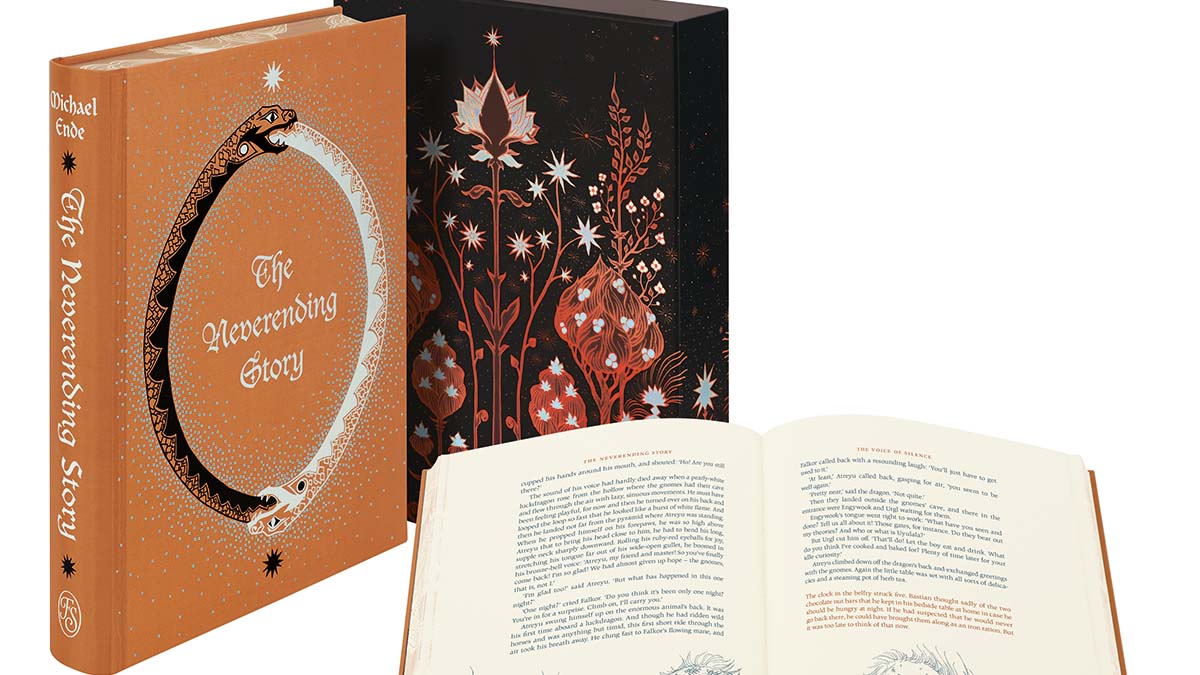 This week, the Folio Society, the independent publisher of beautifully produced books, is celebrating its landmark 75th anniversary. The title released on Tuesday 4th October is Michael Ende’s enduringly popular coming-of-age fantasy novel ‘The Neverending Story’. Over the last three quarters of a century, The Folio Society has delighted generations of faithful readers with almost 2,400 exquisitely-produced editions of much-loved books.

Thousands of readers responded to a public survey inviting them to select a title to mark the occasion. From over a hundred suggested titles, the novel topped the ‘Readers’ Choice’ poll. Originally published in 1979, Michael Ende’s novel has become a cult classic which has been translated into over 36 languages.

When ten-year-old Bastian is inexplicably drawn to a mysterious old book, he is transported through its pages to a world beyond his wildest imagination; an enchanted kingdom populated by dragons, unicorns, giants and sprites. There, he must complete his awesome quest. A former loner tormented by bullies, Bastian becomes the unlikely hero of the story when he joins forces with young warrior Atreyu to save Fantastica from the dark power, The Nothing, and find a cure for its dying Empress.

This special Folio Society collector’s edition brings the literary experience to life by faithfully following Ende’s own description of the book when Bastian holds it for the first time – ‘It was bound in copper-colored silk that shimmered when he moved it about.’ Featuring more than 40 original illustrations and decorative chapter openers by award-winning Edinburgh-based artist Marie-Alice Harel, the text is printed in two colours throughout with copper representing the ‘real’ world and teal the world of Fantastica. This hardback edition is bound in art silk with decorative page edges and is presented in a lavishly illustrated slipcase.

The Folio Society’s Publishing Director, Tom Walker, says: “The Neverending Story is the ultimate book-lovers’ book, because it celebrates the power of reading and the imagination, making it the perfect choice for our anniversary. As a book-within-a-book, we have been able to be especially playful with the design of the edition, which we hope adds a little extra magic to this enchanting story.”

The Folio Society’s CEO, Joanna Reynolds, adds: “At The Folio Society we are proud of our past, our present and, importantly, a progressive and inclusive future. Our track record of publishing beautifully illustrated and produced books from Marvel to Mansfield Park, The Color Purple to Charlie and the Chocolate Factory and A Game of Thrones to The Godfather becomes ever more important in a digital age when bookshelf space is dedicated to having the best edition of a favourite author’s work. The selection of our 75th anniversary title shows fantastic taste among Folio Society readers and we thank them for their engagement in this exciting anniversary.”

The Folio Society has also launched a public competition to win a Folio Library, with the winner invited to select 75 of their favourite Folio editions with an estimated value of over £8,000. Each title will represent every year out of the Folio Society’s remarkable three quarters of a century landmark anniversary. Enter the competition via The Folio Society website.

The discovery of new illustrator talent has also become a key feature making The Folio Society unique among its publishing peers. The Folio Book Illustration Award (FBIA), launched to coincide with the 75th anniversary, announced its inaugural winner on 8th September from a longlist of twenty illustrators selected from over 680 entries from around the globe. This new annual competition asked artists to interpret Edgar Allan Poe’s The Masque of the Red Death and awarded a £2,000 cash prize plus £500 of Folio books to the winner.

Order your copy of Michael Ende’s ‘The Neverending Story’ from The Folio Society.

In this article:Michael Ende, The Folio Society, The NeverEnding Story