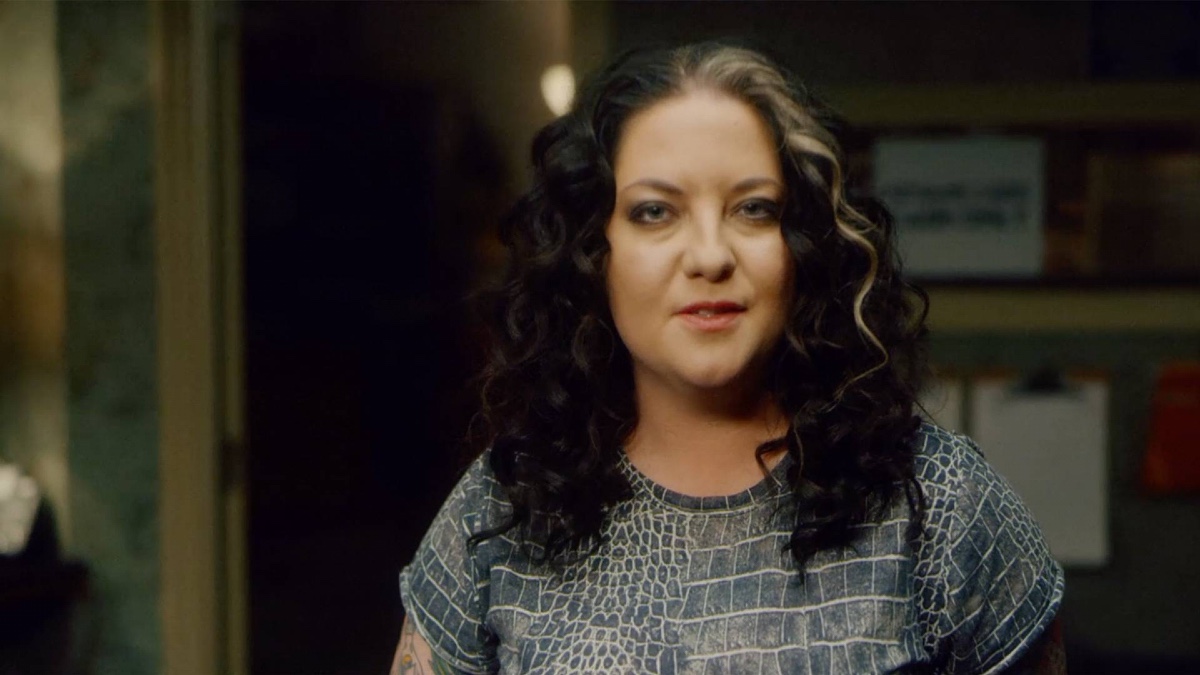 We recently spoke to Ashley McBryde about the inspirations behind and the characters that populate the fictional southern town of Lindeville on this ambitious project. You can read that interview here.

As she explains in the interview, McBryde’s record label, Warner Nashville, was expecting an entirely different follow up to ‘Girl Going Nowhere’ and ‘Never Will’! Born out of a writers retreat with the likes of Nicolette Hayford, Brandy Clark, Connie Harrington, Benjy Davis and Aaron Raitiere and featuring performances from them as well as the likes of Brothers Osborne and Caylee Hammock, ‘Lindeville’ tips it’s hat in both style and sound to acclaimed songwriter Dennis Linde, who wrote such classics as ‘Goodbye Earl’ and ‘Callin Baton Rouge’. Linde devised a fictional town then populated it with the characters that would feature in his songs. Ashley McBryde found herself with such characters as Betty, Pillbox Patty, Brenda, Lerory, Caroline and found a home for them in Lindeville.

The album is an audacious project. One that sticks a middle finger up to the current conventions of the mainstream Country music industry. It’s interweaving narratives and storylines combine to creative powerful songs full of flawed characters trying their best to survive in difficult circumstances. Drunkards, cheats, liars and fools populate the streets of the town, all searching for their pathways in life – some finding redemption and some falling flat on their faces! We’ve all been Lindeville, we know the people of the town. They are our mothers and fathers, our sons and daughters. Our friends. Our colleagues. Our neighbours. Us. Which is why the album resonates in the way that it does.

The elephant in the room and one that McBryde directly addresses in our interview, is the fine line she had to walk on this album in not glorifying economic deprivation and lack of education for creative titllation. ‘Lindeville’ is not an exploitative piece of work that looks down on this demographic of southern folks – its place is right in the mix amongst them, telling the tales of addiction, lies and struggle from the inside: made, created and birthed by writers who have direct experience of that way of life.

The album is bookended by the same melody that opens ‘Brenda Put Your Bra On’ and closes down the title track. This gives a sense of connection and finality to our tour of this town. ‘Brenda……’, a song Ashley McBryde is already playing in her live set, sees McBryde, Caylee Hammack and Pillbox Patti (AKA Nicolette Hayford) activating the Lindeville phone tree in a salacious act of gossiping as they witness a cheating couple right next door! ‘Shit’s going down in the neighbourhood,’ indeed! Think Miranda Lambert style white trash funky guitars on this cracking southern tinged, dirty number that will make you chuckle with lines like, ”I hope they don’t knock out the cable!’

There are similar tales of southern struggle all over the album. ‘Jesus Jenny’, written and performed by Aaron Raitiere, tells a tale of a woman, ‘fucked up on vodka and Sprite.’ It’s a gentle yet tragic acoustic song that develops a beat in the second verse and burrows away into your consciousness too whilst ‘Gospel Night at the Strip Club’, performed by Benjy Davis, shines further light on characters like Brenda and Patti as Davis’ spoken word delivery is augmented by an almost church-like hymn melody on a chorus based around a ‘Hallelujah’ mantra.

Southern flaws are explored further on songs like ‘The Missed Connections Section of the Lindeville Gazette’ on which Aaron Raitiere and Brandy Clark take the roles of people looking to cheat on their respective spouses. ‘Man seeking woman, 25-44,’ Raitiere sings, ‘Cool if separated, even better if divorced….wont tell his wife!’ There’s a Bluesy, almost Rag Time, New Orleans-esque feel to the music, as the pianos weave an almost hypnotic spell, on this simple yet evocative tale of adultery that will be a fantastic addition to McBryde’s set if she can acquire a male counterpart for the first verse.

One of the cleverest moments on ‘Lindeville’ comes on ‘If These Dogs Could Talk’, a fantastic, Bluesy song that plays with the idea that it is the dogs of the town that are the true secret keepers and witnesses to all that transpires! Performed by Brandy Clark, there’s a real ’12 Stories’ feel to the structure, melody and cadence to ‘…Dogs Could Talk’ that will delight existing Brandy-fans and rope in a few more that haven’t yet fallen prey to her talents like the rest of us have! ‘If these dogs could talk,’ she sings, ‘they’d sure tell on you. We’re all lucky barking is all they can do!’ Strong, authentic Country storytelling and light-hearted but bang on point Country music too makes ‘….Dogs..’ one of the stand-out tracks on the album.

‘Lindeville’ doesn’t always choose to focus on the flaws and the fucking however! It also chooses to shine a light on the strength and the hope that can be found in small town America. ‘Play Ball’, performed by Brothers Osborne (John Osborne produces the whole album) focuses on Pete, who tends the ball field down at Dennis Linde park. Pete lost his ‘wife to cancer and a thumb in Vietnam’ but is one of those quiet, stoic people that are full of wisdom and advice like, ‘Go to church, love your mamma and play ball.’ The song has a gentle strength, much like Pete himself, and is executed, as you would expect from TJ and John, with some aplomb.

Most of the hope and the strength residing in Lindeville can be found on the final three songs. “When Will I be Loved’, a cover of the Everly Brothers classic, performed by McBryde, Brandy Clark, Caylee Hammack and Pillbox Patti is an uptempo, energetic and melodic clarion call from the women of Lindeville which essentially poses the question, ‘When will things get good?’ This song works in tandem with ‘Bonfire at Tina’s’, the stand-out track on the album. After activating the phone tree again, the women have called a truce and have gathered at Tina’s to bemoan all the pressures and problems that they have to face in their various guises, roles and relationships. ‘Small town women ain’t built to get along,’ they sing, ‘But you burn one and you burn us all.’ ‘Bonfire at Tina’s’ is an anthemic, powerful song with an uplifting chorus and a huge guitar solo. It will form a pivotal part of Ashley McBryde’s live set for years to come in a way that always gives a nod back to this album, even when she is four, five and six albums down the line. Like Pete and many of the the residents of the town, this endures.

The guided tour of life in Lindeville is brought to a close by the title track. ‘Lindeville’ is a hopeful song, full of grace and a hint of peace too. There’s a meta-like feeling that things won’t stay that way for long but there’s an enjoyment in it being that way for now. Betty, Patti, Brenda and Lerory are all having a good night, good in turns of holding their demons at bay for a while. The third verse reveals the town square clock as the narrator of the song: the presence that is watching over them all now and has been for many years. ‘Tonight, I wish I could just stand still……’ the clock says, desperately trying to keep life peaceful for the residents of the town but desperately aware that it can’t, ultimately, prevent them from blowing up their own lives. On this one night, however, ‘there’s nothing but stars over Lindeville,’ and Ashley McBryde leaves us with a sense of hope. An attitude that small town America will never walk away from, no matter how tough things get out there.

Even Caroline, the missing woman from ‘The Girl in the Picture’, a tragic tale of loss from earlier in the album, gets a mention on the title track, as McBryde sings about there being ‘one more star over Lindeville’ – turning the tables from despair into hope as we bid farewell to the town, for now. I get the feeling, however, that this won’t be the last time we hear from some of these characters.

‘Lindeville’ is an ambitious attempt to paint a picture of small town America, warts and all. Yes, there are meth heads, criminals, drunks and cheats but middle America is also populated by people with stoic reserve, with morals and with a quiet decency that sometimes get overlooked by the nosier , more chaotic residents of these towns. Sometimes life doesn’t always turn out the way it should, and sometimes it does, and you get to go to Nashville and make an album about your upbringing and the family and friends you left behind. Ashley McBryde and her roster of contributors and collaborators have captured perfectly the sense of southern desperation, struggle and pride that exists in small town USA with some aplomb. Never exploitative, always real, “Lindeville’ is not the third album that we were expecting from Ashley McBryde but it is, for sure, the one we all needed.

In this article:Ashley McBryde, Lindeville