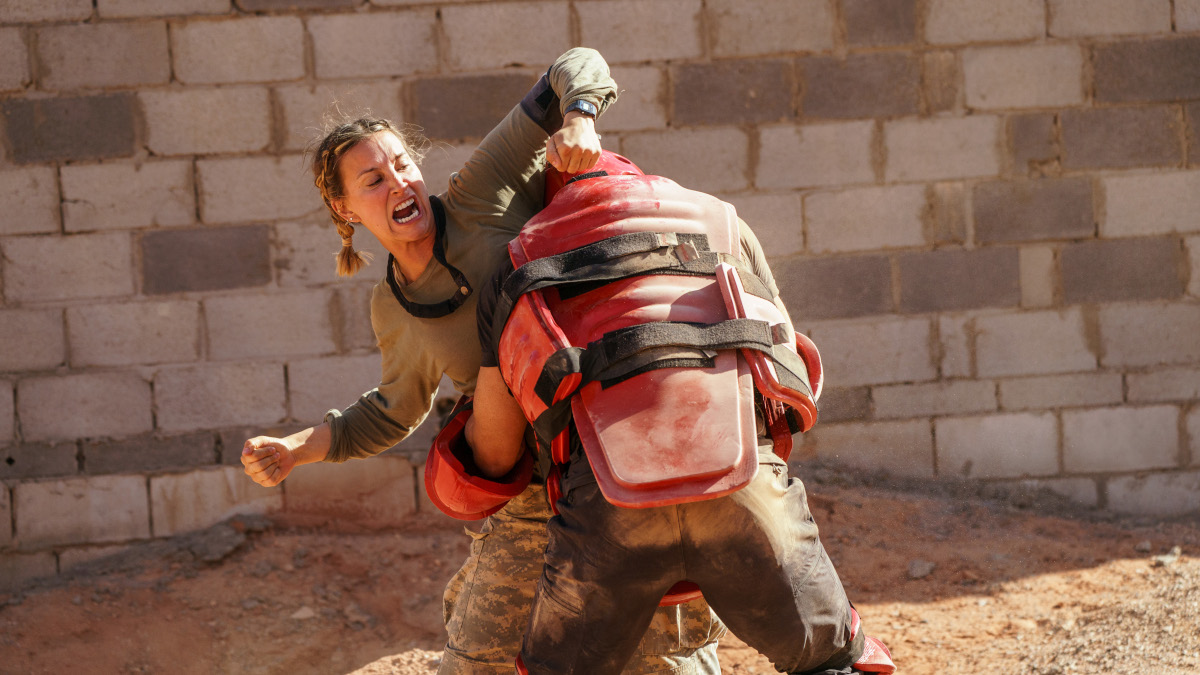 The fourth series of Celebrity SAS: Who Dares Wins continued on Sunday night. With 12 celebs taking on the third phase of the condensed SAS selection course.

In episode 3, the theme was Resilience. The episode opened up with the DS discussing the performance of the remaining recruits. The highlighted number 13, Dwain, number 9, Curtis and number 8, AJ as those who were in the middle of the pack. They decided to put the competitive brothers, Curtis and AJ, up against each other.

After a briefing by Rudy, the recruits headed out for their next challenge. This was a test of mental and physical endurance that required them to work in teams. With AJ leading Alpha and Curtis leading Bravo, the teams would compete to extract and move a loaded vehicle. AJ proved the better leader and his team had their vehicle moving first. Curtis struggled a bit but soon has his team making up ground. In the end the lead of AJ’s team proved too much and Alpha won the race.

The vehicle extraction challenge was followed up with a run across the desert back to camp while carrying their full gear. In the brutal heat number 13, Dwain really struggled. Remi hounded him and even tried to take his armband to keep pushing him on.

At the evening meeting, the DS were impressed by AJ but a bit disappointed with Curtis. They also highlighted that Dwain really struggled on the run. They felt he wasn’t happy when he was really pushed and decided to bring him in for questioning. He said he was finding the cardio tough and wanted to see if he was still as good as he used to be. Dwain opened up about his athletic career and how he ruined it by taking performance enhancers. He admitted that he needed to stop giving up when he found it tough.

As the celebs were settling down for sleep the DS called them outside for more beastings. The first test was to hand from monkey bars for 2 minutes as a team. On Bravo, number 1, Jennifer dropped after 40 seconds. Everyone had to start again and it was Jennifer who fell down first again after 20 seconds. Foxy reduced the time to 1 minute and told her team to find a way to support. They changed position and Curtis tried to use his legs to support Jennifer. This time Curtis fell after 45 seconds. For failing, Remi had everyone submerge in the freezing pool.

The next challenge the celebs faced was a mountain pass manoeuvre. Here they had to sidestep across ropes, 160ft above ground. Dwain was first to tackle the challenge and he impressed by making it across. Number 14, Ashley and number 8, AJ also managed to make it.

Later, the DS brought in Curtis for questioning. He said he’d had a hard day and felt his mind gave up on him during the mountain pass challenge. He discussed challenges he’d had in the past that had stopped him reaching his goals. Billy and Remi gave him advice on how to progress.

In episode 4, the DS test the celebs ability to stay composed when faced with some of the most terrifying tasks on the course. With emotionally charged hand-to-hand combat, and having to make split-second decisions about whether to shoot in a simulated warzone, the recruits are pushed to their mental limits.

Professional boxer Shannon Courtenay comes face-to-face with her anger issues, and Ferne McCann confronts her fear of the dark when the recruits are forced to dive backwards from a seven-metre platform into the waters of the Gulf of Aqaba in the dead of night.

At the end of the episode, the DS cull two recruits – but who will lose their place on the course?

Celebrity SAS: Who Dares Wins 2022 continues at 9pm Sunday 25th September on Channel 4. Preview the episode with our gallery: