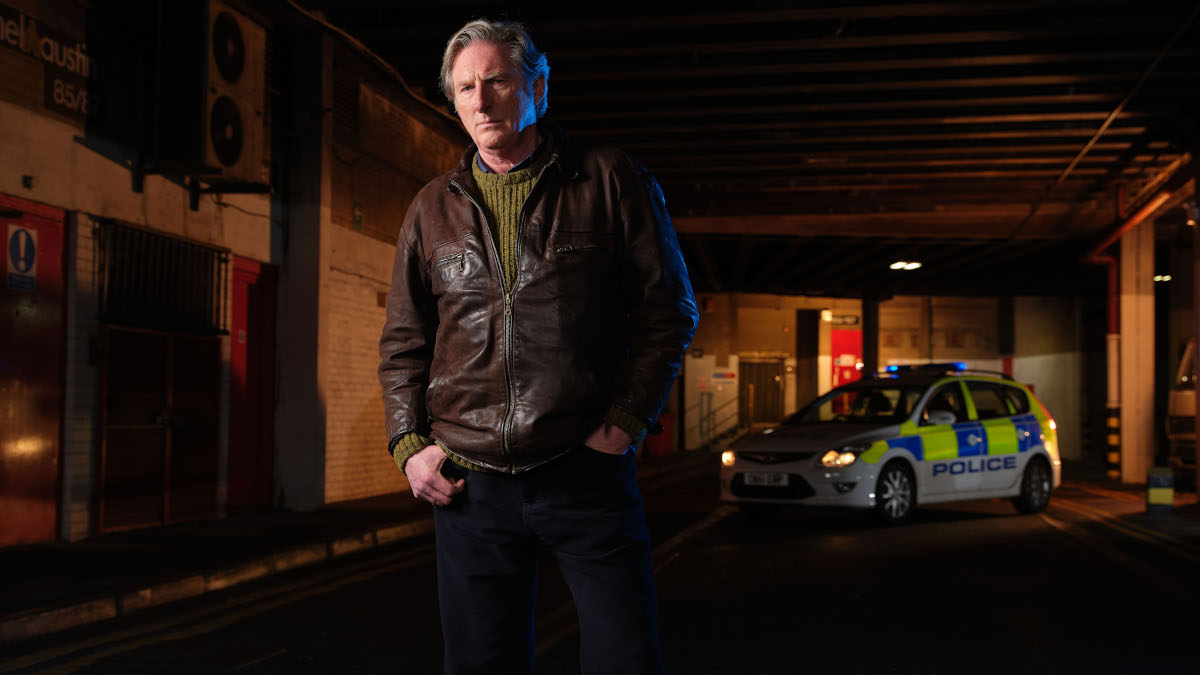 In episode 3, ‘Ridley‘ (Adrian Dunbar) met a jazz singer and took on the case of her missing brother. There were plenty of twists and turns along the way including a linked murder.

The episode opened up with jazz singer Eve Marbury (Joanna Riding) singing “What’ll I do?” at Marlings. She’d flown in from Chicago for a funeral and had been asked to make a guest appearance. After the performance, Annie (Julie Graham) introduced Eve to Ridley. He bought her a drink and she asked about his singing. He explained he was a retired detective who did consultancy for the police.

Eve mentioned that her brother Luke had gone missing at the age of 15. Ridley offered to help her track him down if she wanted. She also said that she would be singing later in the week at the funeral of Julian Varnham.

The next day Eve went to see Annie and asked where she could find Ridley. Annie said he’d be at home and Eve decided to pay him a visit. She showed up unannounced and found Ridley outside, working on his boat restoration. Eve said she’d like to take him up on his offer to help find her brother. She showed Ridley some old photographs and a bunch of letters that he’d been sending her since he went missing.

Meanwhile, a meeting was held with Liza (Lucy Robinson) and Jed Varnham (Bryan Dick) to discuss their father’s will. They were surprised to find that a woman named Julie Conway (Hopi Grace) had also been invited. They were even more surprised to find out that she had been left a house and the land surrounding it.

Ridley took his case to the station where DI Carol Farman (Bronagh Waugh) helped look into it. She couldn’t track down a missing person report for Luke but did uncover his criminal record. Carol asked DC Darren Lakhan (George Bukhari) to check the archives for them.

One of the photograph’s Eve showed Ridley led him to a music shop called Ray’s Sound Palace. Ray Trevice (George Costigan) remembered Luke and offered to put an appeal out on his radio station. He also recognised a young Julie Conway in the photograph with Luke. Ridley made some calls and managed to track her down and arrange a meeting.

Later that evening, Ridley invited Eve round to his place and prepared her a meal. He updated her on his progress in tracking down her brother. She agreed to provide the police with a DNA sample. Before the meal they had some wine which Eve almost spilled down her dress. She explained that it was the dress she planned to wear for the funeral. Ridley asked how she knew Julian Varnham and she explained that he awarded her a bursary which led to her career.

The next morning a dog walker came across the body of Julie which was covered in blood. It looked like she had fallen onto her bag and a bottle of vodka inside had shattered, slashing her carotid artery. Ridley discussed the scene with Farman and Lakhan and was shocked to hear that the body was Julie who he was supposed to be meeting later. They spoke to her sister and found out that Julie had an alcohol problem. She also revealed that she had been in a relationship with Jed and that Julian had left her a house.

They couldn’t find Jed so spoke to Liza instead. They asked where Jed might be and questioned her about the house her father had left Julie. She said she didn’t know why he left her the house and that she’d never seen her father and Julie together. Liza said Julie was very maniuplative.

Back at the station, Farman briefed everyone on the evidence surrounding the death of Julie. Ridley joined in with a brief on his missing person case and felt that the two could be related. DCI Paul Goodwin (Terence Maynard) wanted the team to focus on the murder case.

Ridley had managed to track down Duncan Darwen (Jack Deam), the last man to see Luke alive. Farman stayed to focus on murder and Lakhan showed her that forensics had discovered abusive messages on Julie’s phone from Jed. They tracked him down to the barge where he lived. He explained that he loved Julie and that Liza told him she found Julie together with their father. Jed had ended the relationship because of this. He showed the police a collection of abusive letters that she’d sent him.

Ridley went to see Duncan at the garage where he worked and showed him the photographs. He explained he only knew Luke a little and said the last time he saw him was when he’d dropped him off at the scrapyard. Outside Ridley took a call from Ray who said he had a result from his radio appeal. He claimed a male caller had seen Luke in a local pub a couple of months ago. Ridley went back to the station and compared notes with the team. They concluded that one of the Varnham siblings must be lying about what they knew.

Ridley popped to see Eve and updated her on progress. He told her of the connection between his two cases that involved Luke and Julie. When he mentioned visiting the pub, Eve was keen to tag along. Ridley wasn’t sure it was a good idea but she convinced him to take her. The pub had closed down so they tried the scrapyard instead. They remembered Luke but had no new information. They went back to Ridley’s house and chatted about their past. Ridley confided in Eve about the loss of his family.

Back at the station, Lakhan had recovered CCTV showing Liza leaving the house of Julie Conway. Farman decided to speak to Liza again and she confessed that she’d made Julie an offer for the house left in the will. Liza said had lied to trying and stop the police pointing the finger at her.

Ridley went to see Ray again to try and find out more about the mystery caller. Ray showed the call logs and said he didn’t have further information as it wasn’t a regular caller. Ridley felt that the call must be a hoax. Later Ray took another call on his radio station. The caller said he was called Luke and that Ray knew exactly where he was. He told him to confess or he would.

Back at the station Ridley realised that the two sets of letters to Jed and Eve were written by the same person. They went to see Jed again to see if he knew about Luke. They told him the letters were written by Julie. Jed said he had no idea what they were talking about.

Farman updated Ridley that a search of Ray’s call logs showed there was no call and that the records had been manually altered. They pulled the audio from the second mystery caller who threatened Ray. The number was identified as belonging to Duncan so they paid him a visit. He confessed that he’d made the call and explained that in the past Ray had used his shop to attract and groom kids. He felt that Ray wouldn’t have wanted Julie tell the truth.

Back at Ray’s record shop, Ridley and Farman couldn’t get an answer so Ridley smashed the door in. The had a poke around and found evidence that backed up Duncan’s statement. This included photographs of Julie and others when they were younger. They went upstairs and found Ray had hung himself.

At the station, Farman briefed the team on the latest developments. Goodwin asked several questions and then praised Farman for her good work. Ridley felt there may be more to uncover but Goodwin shut him down. Meanwhile, Lakhan managed to find Luke’s missing person report which had been deliberately misfiled in the archives. It showed that Luke had made a complaint against Julian Varnham the day before he went missing.

Ridley felt that Duncan must know more information. They pressed him for information and he told them to drive to the house that was left to Julie. It was abandoned and all boarded up. Duncan broke in through the back and took a look around. They found the room where Ray had taken photo’s of Julie. In the basement, Duncan showed them a hidden door and behind it they discovered the rotting body of Luke.

During an interview at the station, Duncan confessed everything he knew about Julie, Ray and Julian. He explained that Julie would get kids drunk and take them to be abused by Julian. After the complaint by Luke, Julie had tricked him to go back to the house so Julian could deal with him. That’s where he killed him with a heavy ashtray. Duncan said no one reported it as Julian had videos of the kids and made them all agree to never tell.

That evening Ridley met up with Eve again at Marlings. The pair spoke and she explained that she was heading back to the states after the funeral. Ridley was surprised and she said he could go with her. He was surprised but they both had feeling for each other and shared a kiss. Back at home, Ridley had a conversation with his dead wife Kate (Jacquetta May) about the situation.

At the funeral, Ridley noticed that Eve wasn’t wearing the dress that she said she would be. He left and went straight to the hotel where she was staying. On the way he had flashbacks of his interactions with her. In her room he located the dress he expected her to be wearing and found it was covered in blood.

Dr Wendy Newstone (Georgie Glen) updated Farman on the findings of the forensics team. The watch on the body of Luke Marbury had the same serial as one he’d stolen. The hair sample she took was a 50% match to sample found on a shard of glass at the scene of Julie Conway’s murder. However, it was a full match for that of his sister Eve.

Liza gave a speech at her father’s funeral. She introduced Eve to sing “After You’ve Gone”. As she began her performance, Ridley and Farman walked in. Even stopped the performance and said she refused to sing for the man who killed her brother. Eve was arrested and Ridley asked to talk to her. He explained when he saw the different dress he knew she’d killed Julie. She said Julie had come to see her about Luke and confessed to what she’d done. It led to a fight and she pushed Julie over which led to her death. Ridley was furious that she’d lied to him and that he’d trusted her.

Elsewhere in the episode, Carol and her wife Geri (Bhavna Limbachia) interviewed potential sperm donors. Inmate Michael Flannery (Aidan McArdle) called Ridley to come and see him. He’d had some bad news that his mother was dying from cancer. He begged Ridley to help him get out to see her. Ridley said there was no chance as he was a Category A prisoner and that Flannery now knew how Ridley felt.

At the end of the episode, Goodwin promised Ridley that there would be a full investigation into the case. At Marlings, Ridley played the piano and imagined singing a duet of “What’ll I do?” with Eve.