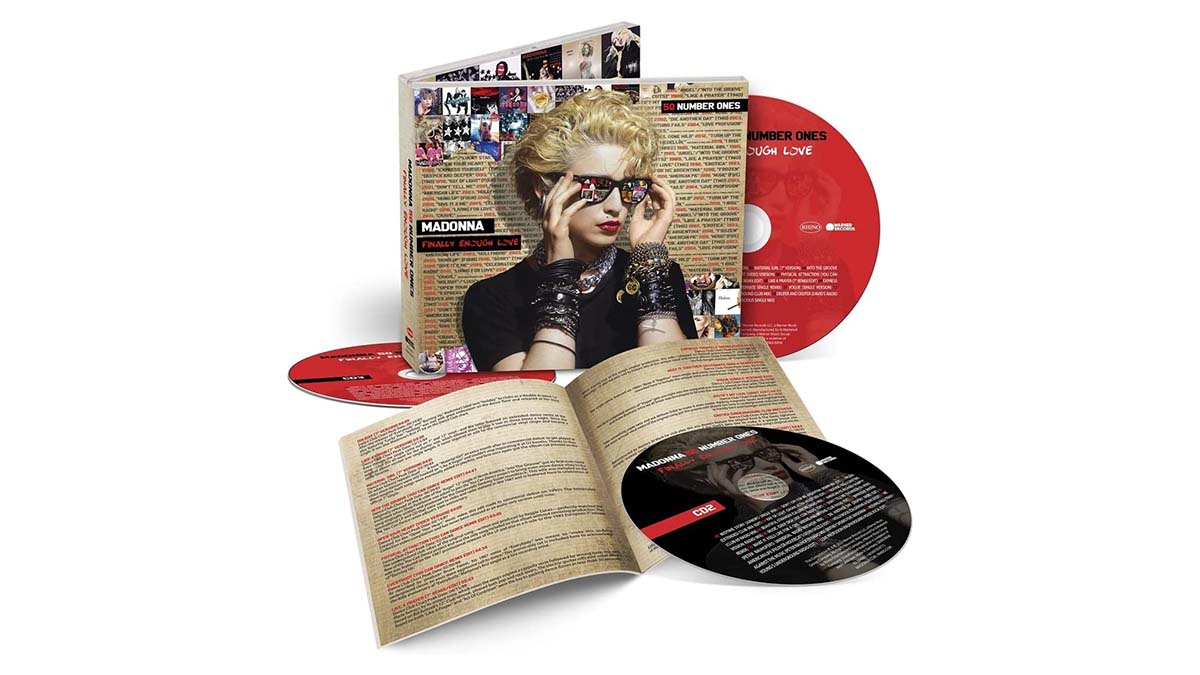 Madonna is one of the most successful music artists of all-time. With a career that has spanned five decades, she’s the undisputed Queen of Pop and she’s still releasing new music and packing out live shows. Following the announcement that she’d signed a deal with Warner Records for her back catalogue, with reissues of her classic albums expected in the future, the first fruits of the deal is ‘Finally Enough Love: 50 Number Ones’, a career-spanning collection that features 50 remixes of her biggest dance hits.

The 3-disc collection opens with the 7” version of Madonna’s ‘Holiday’ and just like that, the listener is transported back to the glorious 80s. That song was the third release from the singer’s self-titled debut album and it’s gone on to be one of her most enduring. ‘Holiday’ kicks off a run of remixes on ‘Finally Enough Love’ that are pure perfection. The 7” versions of ‘Like a Virgin’ and ‘Material Girl’ sound as good as they ever have, while the ‘You Can Dance Remix Edit’ of ‘Into the Groove’ remains the definitive version of that track. There’s no faulting Madonna’s early catalogue and these remixes are a timely reminder of why she’s reigned supreme on the dance charts for 40 years.

From track 12 onwards, ‘Justify My Love (Orbit Edit)’, the collection gets a little more experimental. The remix ups the seductive beats as Madonna breathily delivers the lyrics and incredibly the song sounds even sexier than the original version. The ‘Underground Club Mix’ of ‘Erotica’ strips away all of the music for almost the first 50 minutes before the house rhythm comes in and transforms the overtly sexual song into a low-key dance groove. The early-to-mid 90s part of Madonna’s career often gets overlooked but for me, it’s when she released some of her best work. Listen to ‘Deeper and Deeper (David’s Radio Edit)’ and resist the temptation to get up and dance. Go on, I dare you… it’s impossible. Hearing the layers of Madonna’s vocals in that remix is pretty special too.

The ‘Bedtime Stories’ era, which is one of my favourites, gets a look in with the sublime ‘Junior’s Luscious Single Mix’ of ‘Secret’ and ‘Junior’s Single Mix’ of the ethereal ‘Bedtime Story’, adds chunky beats completing transforming the song from its dreamy original version. Following the ‘Miami Mix Edit’ of ‘Don’t Cry For Me Argentina’, which I’ll admit I’ve never been a fan of, we enter the ‘Ray of Light’ phase. That was the start of a tremendous return to commercial success for Madonna and ‘Frozen’ has been having a little bit of a moment thanks to TikTok more recently. The ‘Extended Club Mix Edit’ of that song turns it into a fist-pumping, sweaty dancefloor filler while still retaining its haunting quality. The highlight of this era for me though is the ‘Club 69 Radio Mix’ of the excellent ‘Nothing Really Matters’, which sounds even more urgent than the album version.

The second half of the collection showcases why the 80s and the 90s aren’t the only eras of Madonna worth celebrating. Sure, her output has been patchier since 2000 and there’s been a couple of albums I could easily file away, but there’s no denying there’s been hits in every single era. A bombastic ‘Deep Dish Dot Com Radio Edit’ of ‘Music’ heralds the start of the 00s and I’m pleased to see the under-appreciated (should have been a single) ‘Impressive Instant’ get a moment to shine with the uplifting ‘Peter Rauhofer’s Universal Radio Mixshow Mix’.

‘American Life’ gets plenty of love here with four remixes from that record, and the ‘Peter Rauhofer Radio Mix’ of Britney Spears and Madonna’s collaboration ‘Me Against the Music’ nestled in the middle. The dreamy Balearic beats of ‘Tracy Young’s Underground Radio Edit’ of ‘Nothing Fails’ is my favourite mix here and it shows how a song can pack a very different punch with different production. The ‘Confessions on a Dance Floor’ era remixes are some of my favourite moments on this collection. The ‘SDP Extended Vocal Edit’ of ‘Hung Up’ is pure magic as is the thumping ‘PSB Maxi Mix Edit’ of ‘Sorry’. It’s all about the ‘Jacques Lu Cont Vocal Edit’ of the magnificent ‘Get Together’ for me though. Easily one of Madonna’s most under-rated singles, this remix takes the euphoric feel of the track to a whole new level.

The final 12 tracks on the collection encompass the ‘Celebration’, ‘Hard Candy’, ‘MDMA’, ‘Rebel Heart’ and ‘Madame X’ eras. ‘Hardy Candy’ and ‘MDMA’ are two Madonna albums I don’t revisit all that often but I have to say ‘Avicii’s UMF Mix’ of ‘Girl Gone Wild’ slaps hard and it makes me wish the original song had been a bigger commercial smash. From the ‘Rebel Heart’ era the glorious ‘Offer Nissim Promo Mix’ of ‘Living For Love’ is a highlight and from the ‘Madame X’ era the ‘Tracy Young Dangerous Remix’ of ‘Crave’ featuring Swae Lee is an unexpected highlight, injecting a soulful groove into the gritty hip-hop song.

The release of ‘Finally Enough Love: 50 Number Ones’ should put the focus back on Madonna’s music. The press, and fans, are more concerned with criticising how Madonna looks and acts (I wrote a whole feature about the double standards people have when it comes to the Queen of Pop), and her age is used against her like some kind of reason she should stop making music. Regardless of what you think of Madonna, no one can deny the huge impact she’s had on music, the path she’s paved for other artists and the incredible body of music she’s created, and continues to create. Put this collection on loud and dance your socks off.