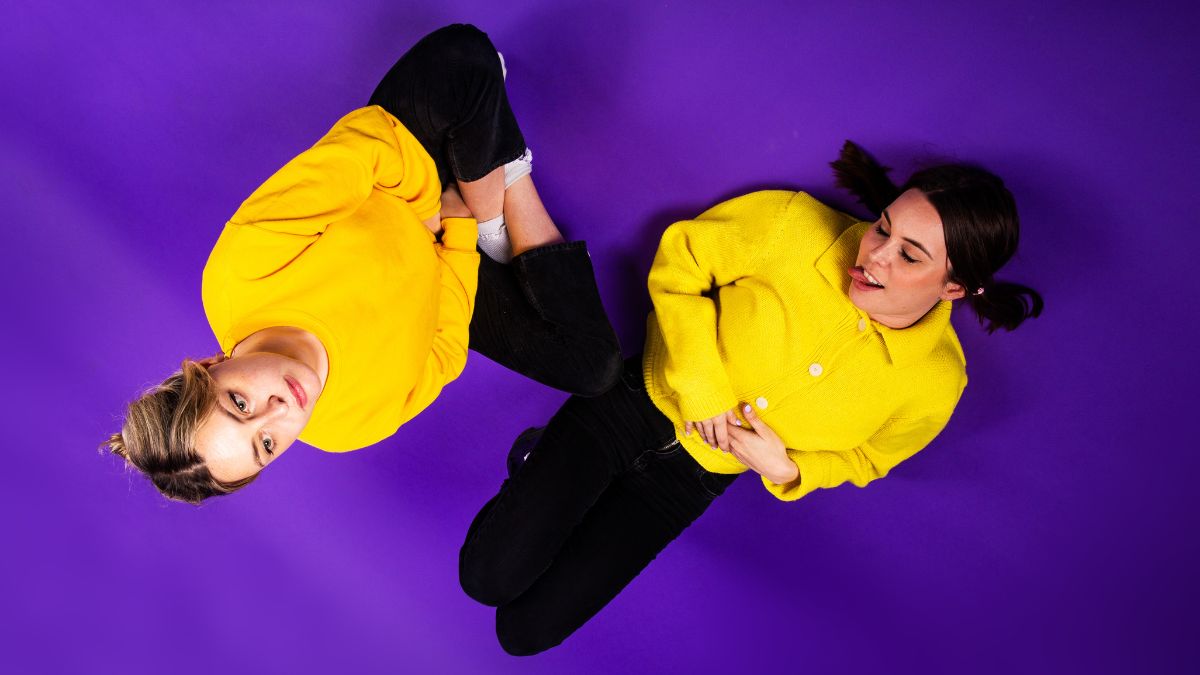 Set in a school for talented Siblings with some mystical twists, Silage is the new show from comedy sisters Maddy and Marina Bye.

In the last four years, they have performed internationally and across the UK in festivals and on the live circuit. They have sold out three consecutive Edinburgh Fringe runs as well as a sold out extended run at Soho Theatre in 2019.

Marina Bye studied at Guildhall School of Music and Drama whilst Maddy Bye studied at the same time at the Parisian Clown School Ecole Philippe Gaulier. Together, they make something ridiculous and are carving their name onto the comedy firmament. I caught up with them about the inspiration behind this year’s show.

How was lockdown for Siblings?

It was all a bit of a blur. There were moments of humour and horror all mixed into every minute of it, which we imagine would have been similar to most peoples experiences. Some interesting things happened, Maddy was dumped and our cat died  so that was a barrel of laughs to be stuck together indoors for! (they eye roll whilst Maddy goes a bit red)

Covid also cancelled live comedy which makes sense for the time but it meant the adrenaline and the pressure died a little bit which is what we kind of thrive off. The government did tell us to ‘retrain’ so we did spit fire some ideas…. Maddy considered working at a zoo and Marina thought it best to stare at a wall for 2 years.

Looking back, there were some real comedy moments in there though. The rise and fall of zoom gigs will always remain a funny memory, one time a thousand hackers broke into a very innocent, calm comedy gig we were in. We both collapsed to the floor in hysterics and struggled to keep it together while carnage unfolded on the screen.

Some real gems came out of the internet at that time. House Party….remember that? Luckily all the comedians we know were such a brilliant support network, everyone had a bit of a strange time not knowing what was going to happen to live comedy. It’s very surreal that we are now all one week away from performing again at the Edinburgh Fringe!

Tell me about the inspiration behind the show?

We started writing our new show back in 2019 which is when we thought we would be heading to the Fringe. It changed a lot over the last 2 years and we have really been able to hone in on what ‘Siblings’ really is and what we want from our shows. We have ended up making the new show a bit different to our usual style this year which we are VERY excited to present to everyone.

We realized that a lot of the characters we were creating could all be set inside a magical, weird, timeless, horrifying school. Once the world was established, the characters just started building more and more. Lots of them are inspired by our childhoods and what we experienced when we were younger.

We also took inspiration from people we thought everyone could relate to or remember in some way. Then they started extending to characters you see in iconic films, like the American coach who always does inspirational speeches, or big breasted headmistresses who scare the living daylights out of you, the list goes on. It’s the first time we’ve made something set inside a sort of fake / sort of real world which we hope everyone will be able to recognise and laugh at.

We’ve still kept the madness of our usual style with clowning, songs, semi organized choreography and some mid to high range level acting. That’s all there, don’t worry…just in case you were…

Do you think being siblings with a lower case c have a competitive comedy advantage?

We definitely think being Siblings helps with our comedy in some way. It’s how it all began really. When we were children we used to play characters together constantly to pass the time, in the back seat of cars, underneath tables at restaurants. Nobody was safe..

We can bounce off each other so easily and yes we can get competitive & fall out but we always end up wanting each other to win on stage. Nothing is funnier to me (Maddy) than when Marina is absolutely nailing it. Also when we fail or flop. it’s just as funny, if not even more funny. Performing with your sister is really unlike anything else because winning AND losing is funny to us. It’s wild how in sync we can get too, how we can give the time to the other one on stage.

We can even talk at the same time and if you don’t believe this please do approach us and ask. It’s true, see it to believe it.

Do you think sketch comedy is having a renaissance?

It’s always a tricky one with sketch because it goes up then down then up then down. To us, sketch, especially character sketch, can be such a powerful form of comedy. Nothing makes us laugh more and recently there have been some brilliant sketch shows and character shows making a resurgence on screen. Hope that is also the case on stage fingers crossed!

It’s also just such a fun way to escape into different worlds, which is what we are really hoping for in our show this year. To give people an escape from the outside world and just laugh for an hour without having to think about the last couple of years.

We also are weird because we don’t think we necessarily fall into the straight up ‘sketch’ group. We are a sketch show but it’s mainly character work with a mix of both of our training. Marina went to Drama School for 3 years at the same time Maddy went to clown school in Paris for 2 years so there’s a pretty wild combination of those styles going on. We also have delved this year into a bit more of the musical comedy zone. There’s not really a word for this show’s genre. Maybe CLETCHSONGSICALOWN comedy? Does that work?

What’s the best piece of advice you’ve been given about the new show or what advice are you following?

“Don’t ever say that on stage again” from our director. Just kidding! No he actually did say that once.

One of the best bits of advice we got was actually from someone who worked with us a while ago who made us realize that we didn’t need to underline that we are Siblings in our shows because it’s already obvious from how we interact. This is something we can’t ever see ourselves, so we just have to trust it. Once we started focusing less on the story that we are sisters and more on our characters and sketches, the show became so much more than it was before.

We like to be quite free in our comedy and very much mix what we both separately learnt on our own paths. Even though there is a script and the show is written (we swear it is), it’s ok to go with your impulse and take risks. We always have each other to fall back on and we really like when one of us just goes for it or follows something that’s happening in the room. It’s live comedy so anything can happen at any time. Something we have learnt as live performers is to not ignore those things but to use them.

Also, the Fringe is hard. It’s important to not become all encompassed in your show. It will always change, audiences will always surprise you and some things may land one night and flop the other so we suggest that if you go to the Fringe, take it with a pinch of salt. Anything can happen, we’ve learnt this from previous years. it’s so easy to let things affect you but the advice we give to ourselves is to just keep going and to keep believing in what you’ve created,

Are you used to living together and what’s your flow/rhythm for the month of Fringe madness?

We actually live together in real life as well so we are definitely used to it at the Fringe. Of course, we will also have 7 other performers living with us in our tight tight student accommodation as well, so it’s good for us Siblings not to be stuck alone together all the time.

We so desperately want to say we have a flow and a rhythm in the month of the fringe. It’s definitely something you dream about before going… Routine, morning walks in the Scottish hills, watch 10 shows by midday, sailll like soft buttery butter through your show ending with a standing ovation and then off to bed by 9:30pm. Very quickly that wonderful idea can fly out the window. But that’s ok.

I guess it is just taking every day as it comes in the Fringe and no matter what’s thrown at you to just try and go with it and see it all as a bit of fun. We like to watch a lot of shows as well as doing our own and support each other as performers. It’s good to avoid getting mad at yourself for decisions you make. A great way to combat this is seeing friends who are in the same boat as you and eating lots of food. You will 100% find us at the mac n cheese van a lot, that’s our main rhythm…. Mac n cheese.

What do you hope audiences will take away from the show?

We really wanted to create something this year that will be a silly escape from the last quite horrific few years. We want to hopefully give a show where everyone can laugh for an hour and leave feeling pumped and ready to party into the night.

Our new show is set at a school for talented Siblings. It is completely ridiculous. We hope people will see different characters that they will recognise from their own lives and will hopefully bring them back into their childhood as grown ups.

It is quite rude as well…it’s rude as hell.

There really isn’t anything in the world like performing live comedy. It is honestly incredibly nerve wracking, even after 5 years of doing it, Maddy still slowly and silently flops to the floor and sits cross legged (usually somewhere really obscure) before every show and Marina runs to wee whilst the audience are entering the venue. RELIGIOUSLY.

It’s that moment before the show when you think “WHYYY HAVE I CHOSEN TO DO THIS WITH MY LIIFFEEE” but as soon as you get out there you realize why. It’s a rush like no other and when you do a good show, you know there’s no way in hell you can stop. Connecting with a room full of strangers and laughing with them as well… its sick.. It’s ill.

Going to watch live comedy as well doesn’t compare to anything else, watching someone tell the story they have chosen to tell whilst making you laugh and or cry and or wheeze is just the best thing in the universe.