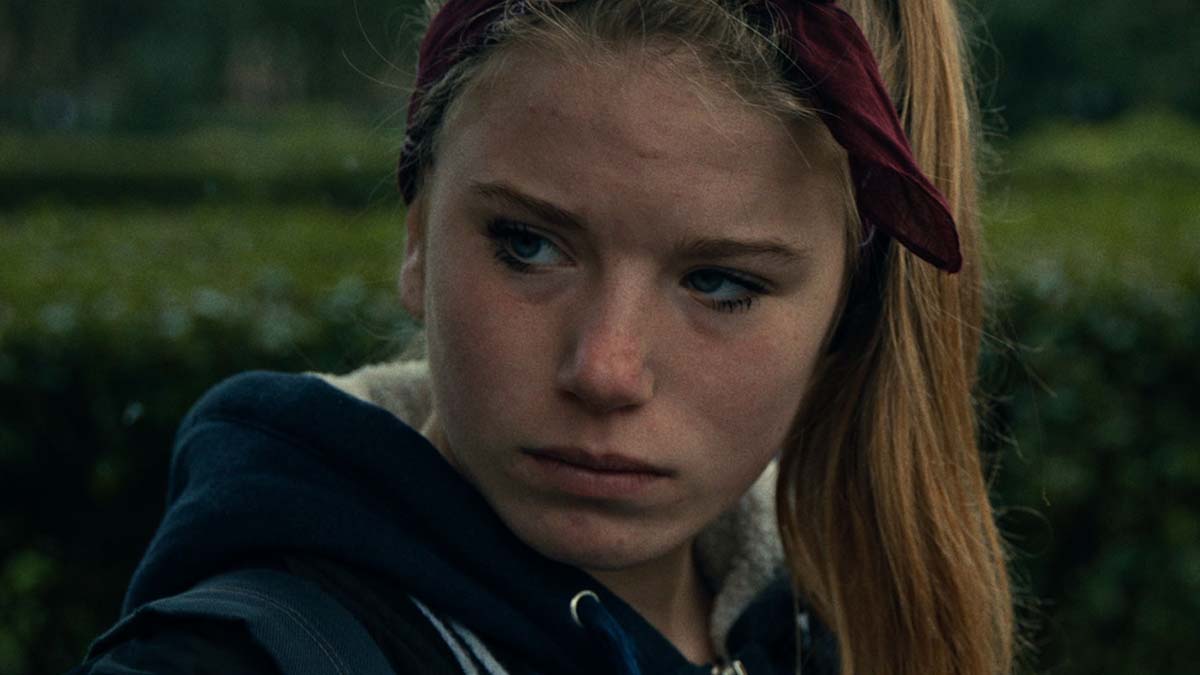 The ‘Girls Feels’ series from NQV Media rolled out during July and the third (and final?) volume is ‘Girls Feels: Skin Deep’. This instalment takes in five shorts from the Netherlands, France and Tunisia, and it explores identity and the complexities of evolving from a girl into a woman. The previous two instalments – ‘Girls Feels: Into the Blue’ and ‘Girls Feels: Forces of Nature’ – explored the themes of water and societal pressures respectively.

Sarah Veltmayer’s ‘Never Forget’ throws you straight into the action as fourteen-year-old Jessie dreams about the perfect first kiss. Accompanied by a friend, she giggles and talks her way through the possibilities before connecting with someone who could turn out to be her disastrous first kiss. The colourful short looks really vibrant and it’s an interesting exploration of a young girl on the precipice of becoming a woman.

The lengthier ‘Chasse Royale’ by Lisa Akoka and Romane Gueret thrusts the viewer into the chaotic world of thirteen-year-old Angélique who lives with her passive mother and many siblings in the suburb of a French town. Lacking in confidence and armed with an aggressive attitude, she’s forced to look inwards when she auditions for a film at school and gets the part. Realising it may be time to finally start growing up, Angélique struggles with her new-found success and begins to wonder if she isn’t the person she’s been presenting to the world.

The highlight on the collection is Josza Anjembe’s ‘The Blu, White and Red of My Hair’, which is a touching exploration of identity. Teenager Seyna longs to become a French citizen much to the dismay of her Cameroonian father. We follow Seyna as she excels at school and wants to be part of the French society she lives in, but she hits obstacles every step of the way including one to do with the size of her hair in relationship to an official photo she needs for her citizenship application. Anjembe really digs into the way Seyna feels about her situation and the conflicts she has inside.

Marti Weerheijm’s ‘When Grey is a Colour’ sees Cato, a young girl, trying to reconnect with her troubled brother who arrives home in a state of depression. With their parents worried, Cato tries to reach out to her brother and chooses the path of persistence rather than giving up on someone who so clearly appears to have given up on himself. It’s a meditation on the strong bond that siblings can have and the importance of having a relationship with your family.

The final short on the collection is Amel Guellaty’s stirring ‘Black Mamba’, which completely subverts what people think about Tunisian women. Sarra seemingly has the perfect life, on the verge of marriage and keeping her mother happy. Secretly though, she participates in boxing away from the eyes of her family and she finds a release in the ring that keeps pulling her back for more. Sarra’s story is one of expectation versus desire and it’s one that all of us can relate to.

‘Girls Feels: Skin Deep’ is the strongest of the three collections by far. I was a little disappointed with ‘Girls Feels: Skin Deep’ but this release gets things back on track. There is more depth to the shorts here and they tell stories that are not only important but also deeply engaging. Fingers crossed there will be more instalments to come in the future.