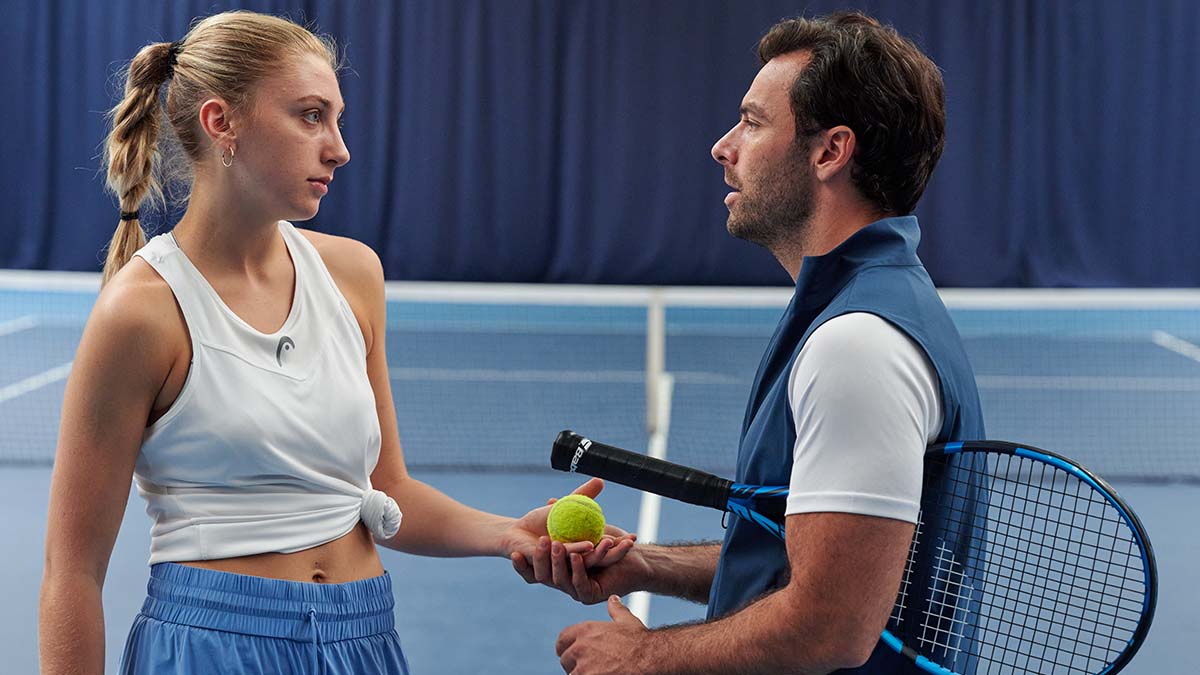 ‘Fifteen-Love’, a tennis drama from the World Productions, is heading to Prime Video and the first image is available to see.

Newcomer Ella Lily Hyland stars alongside Aidan Turner (‘Poldark’) in the provocative drama set in the world of elite tennis.

‘Fifteen-Love’ explores the story of Justine Pearce (Hyland) a dynamic young sports prodigy, who had a meteoric rise in the world of Grand Slam Tennis. Glenn Lapthorn (Turner) was Justine’s maverick coach with whom she shared an intense rapport. Together they reached the Semi-Finals of the French Open. However, tragedy struck on court, and Justine’s dream of sporting glory was cut brutally short by a devastating injury, which resulted in a shattered wrist and the end of her professional career.

Five years on, now aged 22, Justine is a therapist at her old tennis academy, Longwood, alongside her former physio. It seems like she is finally healed, both physically and psychologically, from her humiliating downfall on the global stage. But when Justine makes an explosive allegation against her former coach, everyone at Longwood is forced to reconsider everything they thought they knew about Justine and Glenn’s past success.

Justine and Glenn’s battle over the truth of their past reaches new heights as they both seek glory at the Grand Slam grass court event of the year, and the stately world of professional tennis is rocked by lies, deceit, and a desperate bid for control. Examining the intense physical and mental pressures of professional sport, Fifteen-Love is a gripping and sensitive exploration of trust, power and obsession, and what can be lost when you’ll do anything to win…

Writer and Creator Hania Elkington says; “The voice of women in sport has never been heard as loudly and clearly as over the last two years. From Simone Biles to Naomi Osaka, Emma Raducanu to Pam Shriver, the pressures and realities of being at the top of your game on the world stage are finally breaking through to us, making us look again at the price our young prodigies can pay for the goals they work so hard to achieve. Writing this drama, and the people I’ve met through my deep-dive into researching it, has been revelatory. I hope that ‘Fifteen-Love’ has the same effect on its audience, and can become another valuable part of this urgent, emerging story.”

Aidan Turner commented, “Hania’s scripts and characters are so incredibly layered and nuanced, tackling themes and issues within the world of sport that I don’t feel have been explored on screen before. I am excited to take on the complex role of Glenn and can’t wait to work with Ella, Hania, World Productions, Prime Video and the rest of the cast to bring this important story to life.”

Ella Lily Hyland adds, “When I read Fifteen-Love I was struck instantly by how important and unique the story felt. Hania’s writing is looking at the greyer areas in relationship and power dynamics. Justine is such a gorgeous, complicated character. I feel so lucky to be playing her and to be part of such a brave and bold team.”

‘Fifteen-Love’ is currently filming and will launch on Prime Video in the UK & Ireland, next year.