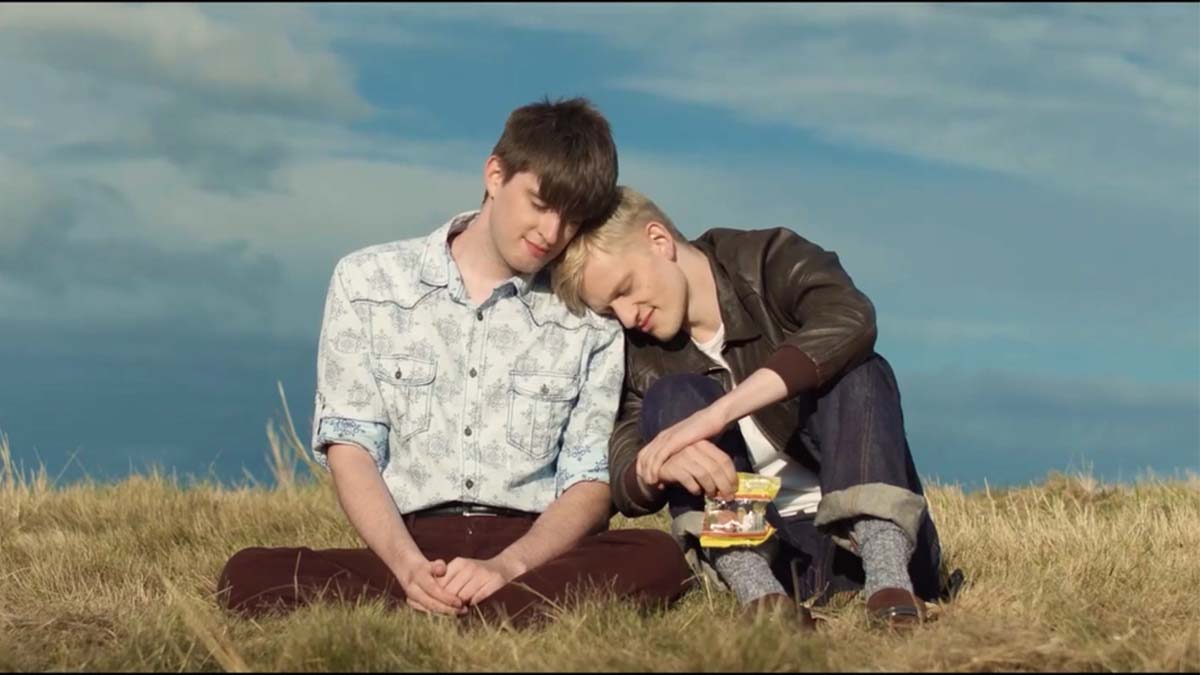 You Are My Sunshine from TLA Releasing on Vimeo.

Joe (Jack Knight) is a closeted teenager in the 1970s living with his homophobic father and his sister Ethel (Charlie Clarke). A bit of a loner, Joe strikes up an unexpected friendship with Tom (Steve Salt) and it’s not long before the two fall in love. As the pair grows closer, Ethel starts to suspect that there may be more to the relationship than friendship and when her suspicions are confirmed, it drives a wedge between the siblings that lasts until the two reach old age. With Joe and Tom still together decades later, Ethel and her son John (Jonathan Butler) meet up with Joe but can the bond between brother and sister be fixed?

‘You Are My Sunshine’ is a story of a romance that lasts for decades and it’s an attempt to explore the oppressive society that gay men, and women, endured in the 70s compared to the much more liberal and accepting society of the modern day. Tom and Joe are two souls who find each other by chance and their connection is instant, and it’s their bond that helps them weather the difficult times that lie ahead. We see glimpses of Joe’s homophobic father reacting aggressively to gay pride marches on television and it’s clear that Ethel has adopted her father’s views without any consideration as to what she herself might actually feel.

Writer and director David Hastings moves between the 70s and the present day, giving the viewer context around Joe and Tom’s beginnings and showing the impact their relationship has had through the years. Ethel’s son John is keener to build bridges with Joe than Ethel is, and the meet-up they have in a café is disappointing as Ethel simply cannot move on from her outdated views. It would have been a bonus had Hastings really dug into Ethel as a character. While it’s conceivable that he father’s opinions would impress upon her, there feels a lack of motivation for her to be so stuck in her views even after her father is long gone.

There is a little bit of disconnect between the two time periods too. I found the 70s storyline far more engaging as Hastings did more to explore the relationship that blossoms between Joe and Tom, and while it may not have been as deep as it could have been, it produces the film’s most enjoyable moments. Steve Salt and Jack Knight give strong performances and they forge a believable chemistry that carries you through the film. The old actors – Charles O’Neill and Ernest Vernon – sadly don’t manage to create the same chemistry and I found their scenes lacking.

‘You Are My Sunshine’ is an ambitious film and Hastings does pull off telling a rather important and relatable story. The film could have benefitted from a little more depth, particularly around the character of Ethel, and it’s a shame that the older actors couldn’t match the chemistry produced by their younger counterparts. That being said, ‘You Are My Sunshine’ is still an enjoyable drama that captures an important part of history for gay men and women, that should never be forgotten.