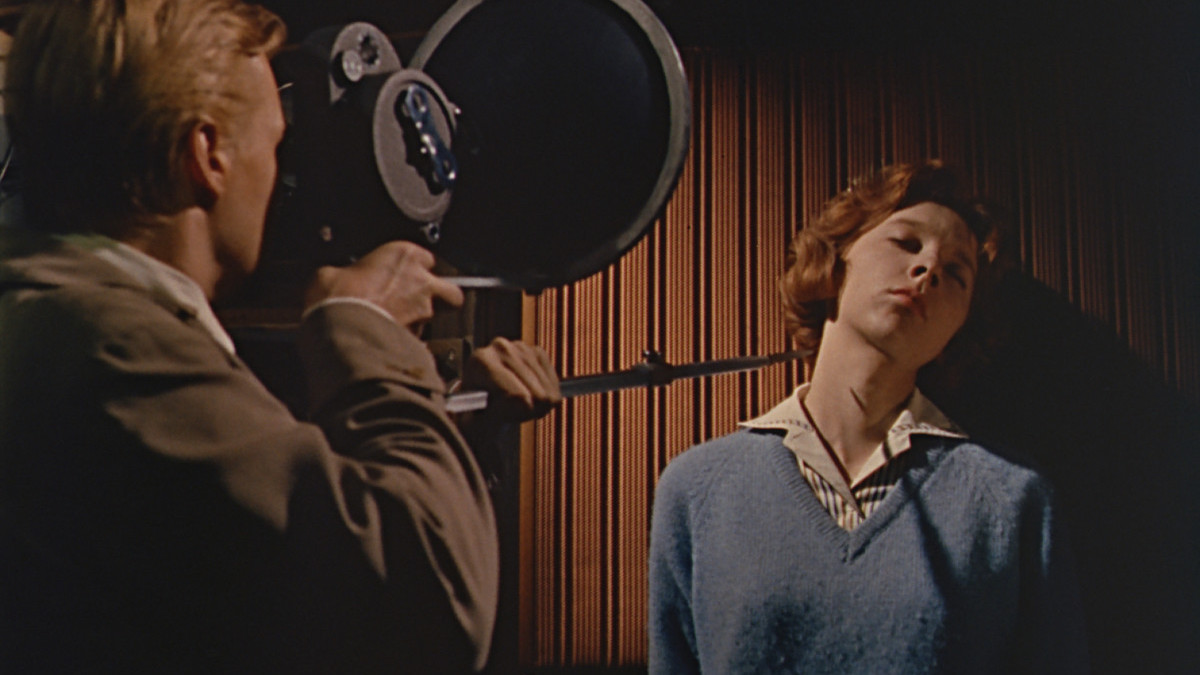 To celebrate this landmark, we have taken a dive into this wonderful selection of British cinema, and selected some of our favourite Vintage Classic titles to revisit. Our first choice was Michael Powell’s beguiling, visually stunning masterpiece ‘Peeping Tom’. One of the most controversial films ever made in Britain, and restored by StudioCanal in 2010 to mark the film’s 50th anniversary.

You often hear of filmmakers being sent to “movie jail”. The story goes that some poor director will helm a financial failure or two, and therefore studios no longer want to hire them. They spend a few years in “movie jail” atoning for their sins and rebuilding their reputation, and eventually they might be allowed to make a comeback.

It’s a far rarer thing for a director to make a film that doesn’t just send them to movie jail, but completely tanks their entire career as well. That is what happened to Michael Powell after the release of ‘Peeping Tom’. The film was so notorious, and so critically reviled, he was never able to make a film in Britain or America ever again. One of the most renowned filmmakers in the world, and his career was effectively over.

The film tells the story of Mark Lewis (Carl Boehm) a young photographer and cameraman in London, who murders women whilst filming them with a portable camera, allowing him to capture their dying expression of fear and horror. Making lurid use of light and colour, ‘Peeping Tom’ is both a shocking serial killer movie, and also a fascinating vision of the violating and voyeuristic nature of filmmaking.

Powell is an extraordinarily ambitious filmmaker, who throughout his career always understood the danger of art, the danger of creating, and how artistic obsession can drive someone to be willing to die for their art. With ‘Peeping Tom’ he took this to the logical next step, and explored the disturbed psyche of an artist who is willing to kill for their art.

Often compared with ‘Psycho’ which was released two months after ‘Peeping Tom’, and to much greater acclaim, both films deal with mild-mannered young men, who have voyeuristic tendencies, issues with their parents, and an uncontrollable desire to murder people. It’s fascinating that one went on to become one of the key texts in film history, and the other was swept under the rug and essentially forgotten for two decades.

It is now rightly recognised as the influential prototype slasher film, which dared to take viewers into the mind of a psychopath. Carl Boehm gives a chillingly sympathetic and disturbed performance, filled with so much pain and fear. But ultimately it is the genius of Powell that takes your breath away. He knew that cinema was a voyeuristic artform, albeit from the safety of a darkened movie theatre. With ‘Peeping Tom’ he turned the gaze and made the viewer complicit, and audiences and critics alike were horrified. An extraordinary film, which still possesses the power to disturb.

This excellent release from StudioCanal comes with an audio commentary from historian and professor of film Ian Christie. There is also a terrific introduction from one of Powell’s greatest cheerleaders, Martin Scorsese. ‘Eye of the Beholder’ is an exceptional short documentary from 2005 about Michael Powell and the making of ‘Peeping Tom’. This programme features extensive contributions from Ian Christie, Martin Scorsese, and Thelma Schoonmaker.

‘The Strange Gaze of Mark Lewis’ is a 25-minute French programme from 2004 produced by Studiocanal with Bertrand Tavernier, Charles Drazin, and Olivier Bouvet taking a more academic and psychoanalytic view of ‘Peeping Tom’.

Next up is a ten-minute interview with renowned filmmaker and Oscar winning editor, Thelma Schoonmaker, who was married to Michael Powell from 1984 until his death in 1990. Schoonmaker has been very active, in collaboration with Martin Scorsese in ensuring Powell’s work has been preserved and restored for future generations to discover. In this interview she talks about Peeping Tom, the vociferous reaction it received, and the damage it did to his career. He was only 55 when the film was released. As Schoonmaker comments, imagine if Scorsese hadn’t been allowed to make any films after 1997 when he was the same age. Think of the films we’d have missed.

This excellent release is completed with a short restoration comparison, revealing the incredible work done to bring this visually sumptuous film back to life. There’s also a trailer and a gallery of stills from behind the scenes.