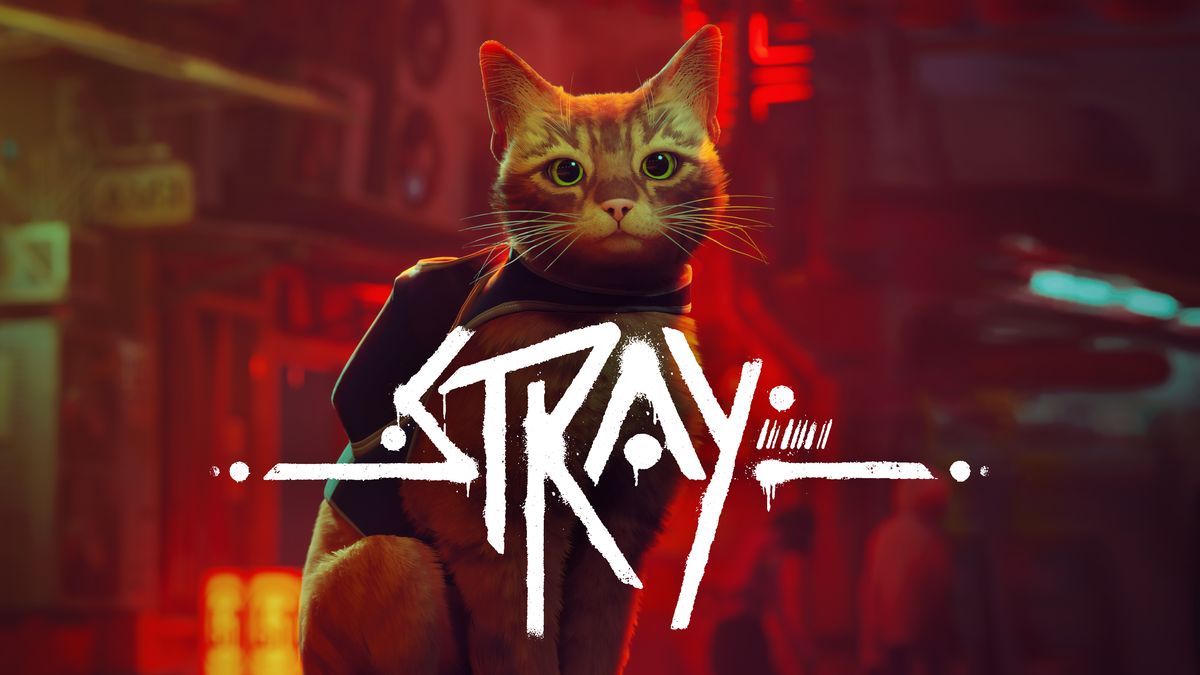 Casting my mind back to 2020 and Sony’s marketing campaign on the future of the PS5 generation is a funny one. All the cool big budget titles being shown off were certainly impressive, but there was one little game that stood out. The trailer showed a little orange cat running around a cyberpunk city populated by robots and of course that game was Stray. There’s a been a bit of hype surrounding this game, but does Stray actually deliver?

Stray opens up to a litter of cats playing in a storm drain. You control the titular and unnamed cat, as you run around this area interacting with your buddies, and finally rest your head to sleep. The next day, your troupe decides to move on. Where are they going, who knows? I’m not a cat (honestly!). During this exodus you get into a spot of bother and take a tumble into the sewer below. Separated from your buddies you travel forward in an effort to reunite, but something is following you. You arrive in a settlement populated by machines and after some investigating, you encounter a little robot who promises to aid you on your journey.

A cat trying to catch up to its family might seem a little trite, but there’s a lot of depth to this game that players might not pick up. You see, Stray is less about the plot and more about the world. The writers have done an excellent job fleshing out their lore. The death of humanity and the rise of the machines is a fascinating concept that players can totally miss if they rush forward. The basic premise is simple, evil corporation pollutes the planet and small creatures called the Zurks have wiped out humanity, sentient machines have built themselves in humanity’s image and lived forever in a walled off city. The big evil corporation has established dominance and taken over the city by using their militarised Sentinels. But that’s not what the game is about, all these events are ancient history. Right now, you are just a cat and your robot buddy, B12, wants to get out of the city. Despite its simplicity, I loved my time with Stray’s story, there are some beautiful plot and characters moments that unfold in front of….well, a cat.

There’s been plenty of games where you control an animal and most of the time, it feels like you’re playing as a human character for bipedal animals or a modified vehicle for quadrupeds. It’s rare you ever feel like the animal you’re playing as, but Stray absolutely nails it. The locomotion and weight of the cat is perfect. This translates to the movement and platforming sections of the game. Since the vast majority of the game is climbing obstacles, it’s imperative it feels right and it really does. The cat can only make jumps or squeeze through gaps that a cat actually could. It makes traversal interesting and you spend your time thinking ‘can a cat make this jump?’. Coupled with B12, there are a few puzzles to solve throughout the game, but they’re not much of a challenge, at the end of the day, you are just a cat and there are puzzles where you have to get a robot to do something impossible for you, like open a door. These limitations offer interesting puzzles, though I wish there was a bit more of a challenge. Between the Zurks and the Sentinels, there’s also a handful of stealth sequences and once again, they’re pretty easy. This works quite well though, as the flow of the game is maintained, rather than coming to an abrupt halt.

What is immediately striking is the phenomenal art design, the game begs you to explore every nook and cranny of the world and there’s plenty of dialogue and visual design to pique your interest. Character design is great and nothing needs to be said about the cat (it’s perfect). The scaling of the game world is excellent and does a great job of making you feel like a small cat. There’s no voice-work in the game, so sound design makes up for it and coupled with the score, it’s incredibly effective. I’m happy to report the PS5 version is bug free and ran perfectly in my playthrough.

Coming to a verdict is quite odd. The story is minimal and requires very little investment, yet the finale had me beaming from ear to ear. The gameplay is simple, there’s not a moment where I felt challenged, yet the game flow was perfect and the 4-5 hours was a great sweet spot. You know, there’s nothing here that should stand out on paper, yet it does. That comes right back round to, “You play as a cat”. The cat is just that, a cat. There’s nothing special about it, it doesn’t talk, it’s not overly intelligent, it’s not even present at critical moments, it’s just a cat. Stray is an absolute delight and while its deepness requires you to let it wash over you and it isn’t built for repeat playthroughs, it deserves your attention.

Stray was reviewed using a digital code purchased by the reviewer.