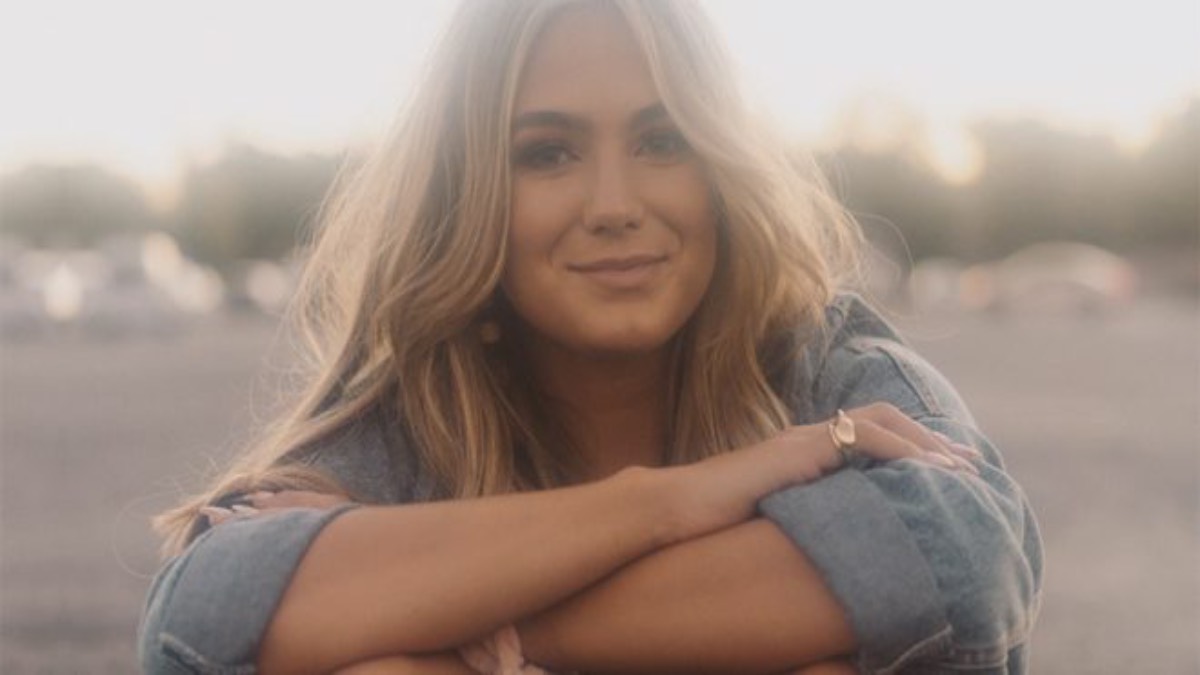 Peytan Porter always believed her singing would take her somewhere else. It did: She moved to Nashville in 2016 to attend Lipscomb University and started writing and co-writing. After breaking out on TikTok during the pandemic Porter signed her first deal as a joint venture with Jody Williams Songs and Warner Chappell Music. She recently played CMAFest for the first time, opening up for Chris Janson at the Ascend Amphitheatre and now she is releasing her ‘In My Head’ project today. (Friday June 24th) We were thrilled to catch up with her to talk all about it. You can also read a review of the project from the link at the top of the page on Peytan’s name.

Thank you for speaking to us Peytan, it’s lovely to catch up and talk about your fabulous new music. You played recently CMAFest for the first time recently, how was that?

No, thank you for taking the time to talk to me. I was pumped to play CMAFest, it was my first one so it was a lot, I still haven’t found the words to describe how I feel about it! (laughing) It feels like some of my dreams are coming true and I’m getting to share them with the people who have helped me get to this point as well.

It was quite overwhelming and I felt like I touched the heavens at one point! (laughing) People kept asking me if I was nervous to play the Ascend show with Chris Janson but that was the only part of the weekend I was truly ready for! All the other stuff around it made me nervous, you know? Will we get there on time? Will my family get in OK? Will my guitar be plugged in right? The playing was the fun bit and the bit that I was really in control of.

I’m loving ‘In My Head’. Each time I play it a different song resonates with me, which I think is the hallmark of a good album.

Thank you, that is such a compliment, that’s awesome.

Why did you choose the title ‘In My Head’?

‘In My Head’, the song that the title comes from, we only cut two days before we made the record! I squeezed it in last minute and it was instantly my title track and the whole vision for the project. I could see the colours, the themes and style right away.

I think that song is the teeth that the rest of the project didn’t have. The other songs are much sweeter and dreamy that ‘In My Head’ and I felt if it was going to reflect who I am, there needed to be something with a bit of bite on there too.

There are some weighty themes running through this project. Mid-20s angst, self-doubt and even self-sabotage pop on in the songs on a regular basis.

Fear. Hope. Emotions. Heartache. Wonder. They are all in there too. Take the track ‘You Go Girl’. At the time I wrote that my biggest fear was being in a healthy relationship because I would have been so afraid to mess it up! I had been hurt before and figured that it was just better to push people away. I wrote it in third person so as to give someone else the advice that I needed but it was for me.

‘Champagne Problems’, meanwhile, was me ruminating on what my life would look like if I had all these crazy things that other people have whilst on ‘First Stone’ I had to find a mental toughness, as both a person and an artist, to be able to ask the world to be a better place.

There is a lot to unpack on ‘In My Head’ and that sets you apart from a lot of your contemporaries. You’re going to laugh, dance and cry listening to this. There’s a lot of depth in these songs.

Thank you. When I played festivals as a kid I would play track 12 of an album and my Mom would say, ‘Play the hits, people don’t want to hear stuff they don’t know!’ That was my biggest fear, that I would never become a ‘commercial’ artist because I cared so much about the craft of songwriting I worried I would never find that balance between the commercial and the artistic side of the industry.

Where did your love of music come from? Did you grow up in a musical family?

No, not at all, we were a sports family! I’m the middle of three girls and I was the only one who picked up an instrument. My whole family were basketball players, even my mom, who was a coach at the high school for a while there. My dad, who is a UPS driver, was the ‘small town superstar’ back in high school, you know?

There is creativity in my family, my dad builds things and my mom can decorate and dress a room in her brain, so she has great vision but no musicians. I clearly needed more attention, as the middle kid, than I was getting, so I picked up a guitar and sought attention that way! (laughing) I loved connecting with people through music.

Were your family surprised when you said you were moving to Nashville?

No, not really. When I was about 13 or 14 my mom said to us that we could choose between a cruise to Mexico or a trip to Nashville and I chose the latter whilst my other two sisters wanted Mexico! (laughing) I told my mom I was going to live there one day, right from around that age. That first year or two in town was tough, though, I thought about moving back home a lot. I didn’t know a soul in Nashville, which was tough. I tried to have a long-distance high school boyfriend but that didn’t work out. I didn’t sing for the first year I was in Nashville, I just spent my time trying to figure everything out, how the town worked, you know?

The only time I’ve ever gone back home for an extended time was during the pandemic. I belong here.

My favourite song today (it changes, daily) was ‘You Go Girl’. You don’t hear those themes from female writers a terrific amount.

My publisher, Jody Williams, told me that my perspective on things is what makes me unique and what brings me to the table as a voice. ‘You Go Girl’ is like a lot of songs on ‘In My Head’, they are all pretty easy to listen to but then when you peel away the layers and look deeper, there is a lot of weight to them underneath.

That one, on a rainy day, like today, is definitely my favourite too. I had that title for a while and originally it was supposed to be a much meaner song after a guy I was dating started dating another musician and she started writing all of these love songs about him!!! I was like, ‘That guy? Someone’s love song???’ (laughing)

I came into a write with Lydia Vaughn and Patrick Murphy and I was telling them about it and they called my bluff and really yanked the vulnerable part out of me because I’m not that good at being sad. It was one of the more uncomfortable songs to write. Comfort has been the number one sacrifice I’ve had to endure to be able to get to do this for a living and get myself into this position so I’m used to feeling uncomfortable!

‘First Stone’ is a very intelligent song, it sits right at that intersection where meaning meets melody, which is where all great Country songs live.

Yay! I was afraid that that one would never get heard. It’s a songwriter song, it’s always been my sort of stripped-back John Prine moment, you know? (laughing) Track 11 on a full project. The guys in the studio breathed some real life into it and even though I’ve been listening to it for over a year now the intro to it just makes me want to run through a brick wall!! (laughing)

Which of these songs is the ‘breakout’ one? The one to send to radio or the one that is going to bring the most eyes your way do you think?

To me, I think there is a song for everyone on this project. I would love for ‘First Stone’ to go to radio if I had to pick a message for the world but I think ‘Why We Broke Up’ might be more radio friendly and I love playing that song so much that if it did become a radio hit and I had to play it a million times, I’d never get tired!

‘Therapy’, which we put out last November, has just had a little second life of its own too. At CMAFest people kept sending me videos of it playing through speakers all over the city.

I’m clueless. What do I know? I tried to give ‘Why We Broke Up’ away to another artist so I clearly don’t know a hit when I hear one! (laughing)

There’s a phone call at the end of ‘In My Head’ that intrigues me. I can’t work out whether the guy you are talking to is untrustworthy and lying to you or it’s actually self-doubt and self sabotage on your part ruining that relationship?

(laughing) I think that it’s up to the listener! If you listen to the tone of my voice I guess it could be either of those things. I’d like to leave it open ended so that people can project their own thoughts and feelings onto that situation. Great writing is often ambiguous and left up to the listeners to decide.

What’s the plan for the rest of the year and where can people see you play these terrific songs?

So, I’ve got some shows lined up, more so in the fall really. I’m opening for Lady A in July and for Lily Rose here in Nashville in a couple of weeks. I’ve got a round with Brett Eldredge in September and will be playing some festivals and fairs across the summer.

I’m actually speaking to you from my producer’s house right now as we’ve started work on the next project which I’d like to get out to people in the fall. There will be a lot of music out this year in my name, thank god!