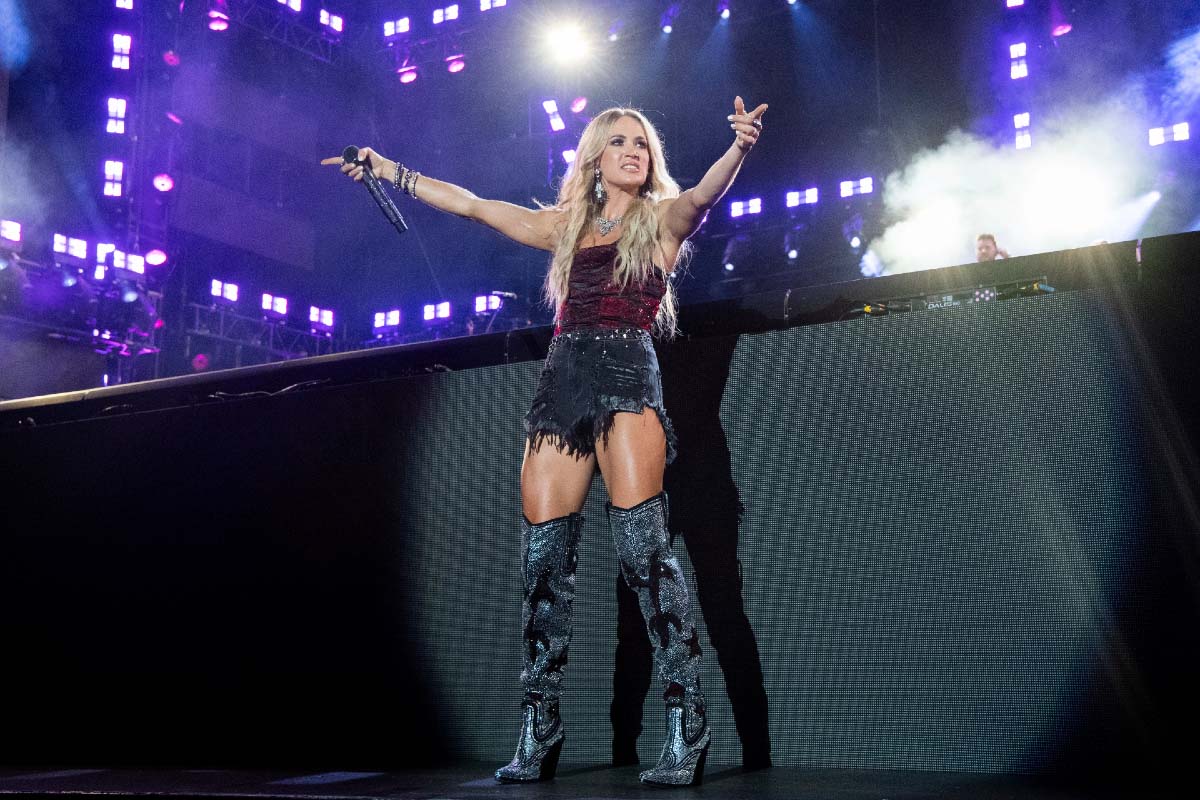 After a two year absence CMAFest returned in triumph to Nashville this year. The sun shone, the rain stayed away and the stages were packed with talent of all sounds and styles. From the moment Brooke Eden opened the festival with the singing of the American national anthem on the Thursday morning to when Dierks closed down the Nissan stadium around midnight on the Sunday night it was wall-to-wall music, meet & greets, signings, shopping, eating and drinking in Nashville. Here, in no particular order, I pick the Top 10 most iconic things I saw the festival this year.

Carly Pearce and Wynonna Judd Singing ‘Why Not Me’

Carly had told Marissa Moss at her panel on the CMA Close Up stage earlier in the day that she had got something planned which would blow everyone’s mind for later that night, and it did! That last note that Wynonna belted out made everyone do a double-take as well.

Drake White Taking Everyone to Church

‘Welcome to church’ Drake White said as he introduced himself at the Riverfront stage on the Saturday morning and he wasn’t wrong either. After suffering a hemorrhagic stroke in 2019 we feared his career might be over but his passion and determination led him to being back at CMAFest in a triumphant set that had the crowd eating out of the palm of his hand. His closing double whammy of a cover of ‘Alive’ by Pearl Jam followed by his own fabulous ’50 Years Too Late’ said everything you needed to know about this talented artist.

There was barely time to breathe during John and TJ’s set on the Saturday night at the Nissan Stadium. In a masterstroke of set list planning we feel they just sat down and said, ‘What if we just played every single banger that we have?’. John was definitely front-and-centre in terms of guitar histrionics from ‘Stay a Little Longer’ to ‘All Night’ to the elongated jam-band punch of ‘It Ain’t My Fault’. There were singalongs, air guitars and inflatable skeletons a go-go!

The Black Opry Songwriters Round at the CMAFest Close Up Stage

What a privilege it was to see such talented artists as Robert Lea, Julie White, The Kentucky Gentlemen and Tylar Bryant (because if it’s spelt with an ‘e’, you know that that ain’t me!) singing inside Fan Fair X on the Sunday afternoon. There was a lot of love on the stage and in the room as the artists played a couple of songs each and sang on each other’s songs too, finishing with a collaborative group version of TLC’s ‘Waterfalls’. Here’s Roberta Lea singing ‘Sweet Baby Ray’ as part of that set.

Rising artist and viral TikTok star Justin Champagne brought a very different energy and vibe to CMAfest. I saw him at the Ryman Block Party on early Saturday evening and it was such fun to see something different. During his set, which included members of the crowd joining him in his viral ‘Do the Lasso’ dance, spontaneous street dancing broke out which Champagne encouraged and it felt like we were in some sort of movie or musical for a while there!

Earning a well earned break from dashing from stage to stage and taking advantage of the air conditioning inside Fan Fair X I sat and listened to this fascinating panel discussing gender, career and the business of being a woman in Country music with these three talented and knowledgeable women. Hosted by Elaina Dore Smith, it was an intriguing insight into what different generations of women have to do to be successful in Country music.

There were so many great guest appearances all over CMAfest this year. Huntergirl and Noah Thompson with Jimmie Allen on the Thursday at the Riverfront stage, Lauren Alaina and Chris Lane, Dierks Bentley & Billy Ray Cyrus and Darius Rucker appearing with the ZBB on ‘Chicken Fired’ to name but a few but my favourite was easily Breland guesting on ‘Need You Now’ with the Nissan Stadium choir alongside him!

The ‘Comeback’ of the Zac Brown Band to the CMAFest Stage

Marcus King on ‘Stubborn Pride’. Darius on ‘Chicken Fired’. King Calaway playing new song ‘When I Get Home’, which Zac Brown produced. These were all highlights of a tremendous return to the CMAFest for the Zac Brown Band. ‘Homegrown’, Toes’ and ‘Colder Weather’ had the stadium choir singing along at full volume in what was a rousing and very passionate set.

A new name in Country music announced themselves on the Sunday afternoon just outside the Bridgestone arena. With his debut album, ‘Greenbroke’ being one of the best releases of 2022 so far I was excited to see Jackson Dean and he lived up to all that anticipation. Playing terrific songs like ‘Red Light’ and current rising chart hit, ‘Don’t Come Lookin’, Dean’s brand of gruff, earthy Country with a bite is on the rise. Here’s new song, ‘Heavens to Betsy’, which will be a radio smash when it is released!

Something fascinating happened at the Nissan stadium on the Saturday night. Imagine a snowball rolling down a hill until it turns into some sort of giant monster ball of ice and you’ll get a feel for what was a terrific night of bombastic Country music. Brothers Osborne spooked everyone with their ‘leave it all out on the stage’ performance which meant Luke Combs brought a similar vibe next. Luke Bryan was clearly inspired and played most of his bigger, uptempo songs which left no room for classics like ‘Most People Are Good’ and then Carrie Underwood hit the stage with a clear ‘no ballads’ rule. Sure, songs like ‘Wasted’ and ‘Jesus Take the Wheel’ aren’t exactly riff-tastic rockers but they are performed with a power and intensity that make them larger live than they are recorded. That finishing three song run of ‘Blown Away’, ‘Last Name’ and ‘Before He Cheats’ was breathtaking really leaving the only ballads of the night ‘Beautiful Crazy’ and ‘Drink a Beer’ from the two Lukes. I went back to the hotel shattered but incredibly energised from a night of the best of what Country music has to offer.