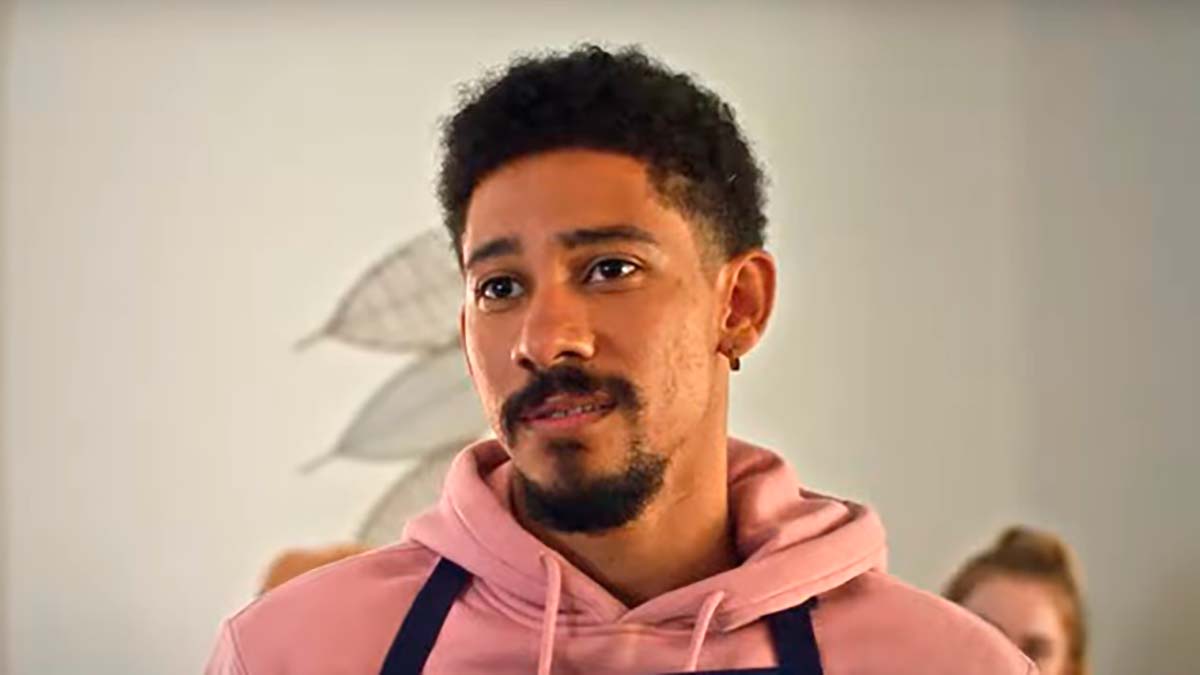 Stuntman Drew (Keiynan Lonsdale) finds himself struggling to break-up with his serial cheating actor boyfriend Nico (Marcus Rosner), constantly drawn back into his bed despite Nico’s selfish and horrendous behaviour. Watching from the sidelines, Drew’s best friend Jake (Dylan Sprouse) decides to create a fake boyfriend to get Drew away from Nico once and for all. Initially on board with the ruse, Drew starts having second thoughts when his new fake boyfriend starts to become a social media sensation and he meets handsome chef Rafi (Samer Salem), who could be his real shot at true love.

‘My Fake Boyfriend’ is an entertainingly silly romantic comedy from director Rose Troche, written by Luke Albright, Greg Boaldin and Joe Wanjai Ross. With a far-fetched plot that has its tongue firmly in its cheek, the film manages to make some astute observations about what life is like for a young gay man in modern times as well as commenting on the rise and impact of social media. Through Drew, an openly gay man who is on the search for true love, the audience is taken on a wild ride that’s funny, sweet, charming and is sure to get pulses racing.

You could say that Jake’s creation of a fake boyfriend is like a modern-day twist on ‘Weird Science’, and you wouldn’t be wrong to do so, but there’s a little more at play here. While Jake wants Drew to move on from his toxic relationship with Nico, and he’s egged on by his girlfriend Kelly (Sarah Hyland), the creation of the fake boyfriend allows him to receive the adoration and validation he’s been missing in his life, and that is the core reason why he wants to continue the ruse even when Drew and Kelly plead with him to bring it to an end. Jake’s refusal causes problems both professional and personal for Drew, and his actions also begin to make Nico suspect that things may not be what they seem.

By simply going along with Jake’s plan, Drew’s character is called into question and he faces a moral crisis once he meets Rafi. Unsure if Rafi is gay, or just overly friendly, Drew begins to spend more and more time with him, while realising that he’s essentially on a one-way road to cheating on his fake boyfriend. Drew also isn’t able to tell the truth without outing himself as a liar, putting him in an incredibly awkward situation.

The film is elevated by its fantastic ensemble cast. Keiynan Lonsdale shakes off his Wally West image from ‘The Flash’ and gets a chance to show what he can do as a leading man and a gifted comedy performer. He has reliable support in ‘Modern Family’ star Sarah Hyland and ‘The Suite Life of Zack & Cody’ star Dylan Sprouse, with both bringing their charm to the screen. Samer Salem is worthy of note too, making Rafi much more than just a handsome love interest and putting in a memorable performance. It’s Marcus Rosner though that steals the show as Nico, and he clearly has a ball playing such a despicable character. Rosner shows off fantastic comedic timing and he pulls focus in every scene he’s in.

‘My Fake Boyfriend’ is pure fun from start to finish. You’re not supposed to believe that what transpires on screen could happen; the film is simply popcorn fodder that you’ll have a great time with. With the emergence of more content focused at LGBTQ+ audiences, ‘My Fake Boyfriend’ helps move things away from the overdone struggling closet case storyline and instead plants us in a world where Drew is out and happy, as are many of the characters around him. It’s a breath of fresh air and it’s sure to hit its core audience straight in the heart.