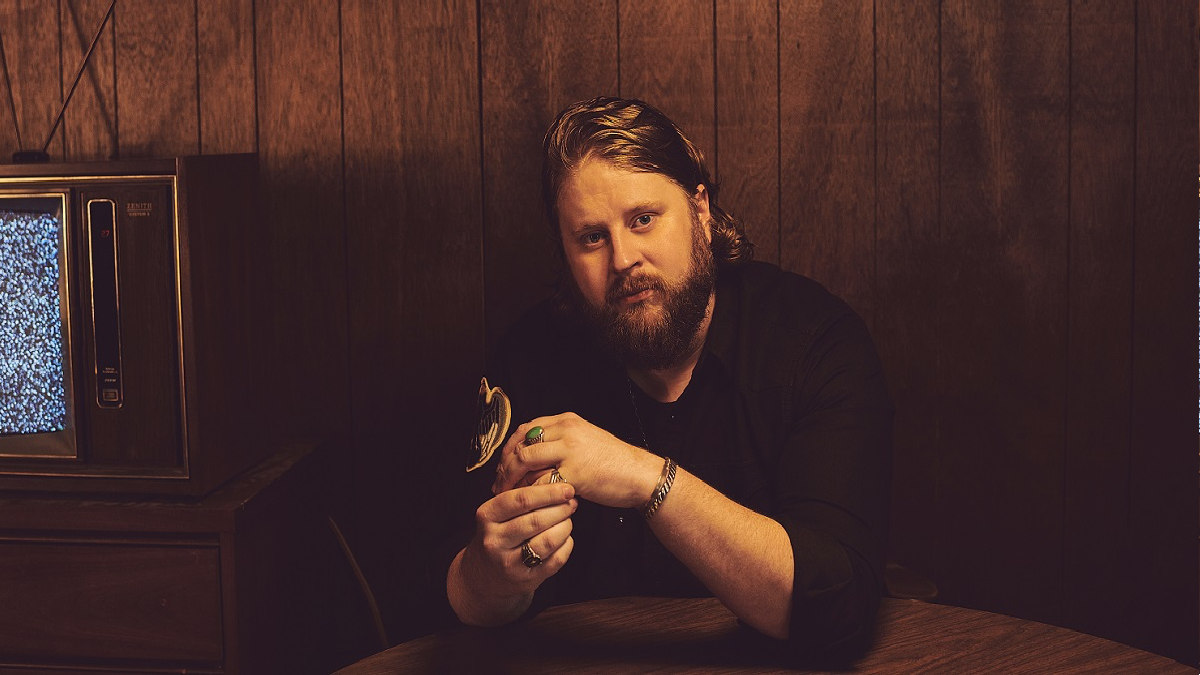 We were big fans of Nate Smith and Tenille Townes‘ ‘I Don’t Wanna Go to Heaven’ which was released earlier in the year but when he releseaed new song, ‘Whiskey on You’ last Friday (May 20th) we knew we had to talk to this rising star.

Smith signed to Sony Music Nashville last year and talks openly about the fire that ripped through his hometown of Paradise, California in 2018 which, backed by a Go Fund Me campaign orchestrated by his friends, brought him back to Nashville after an unsuccessful first attempt that was abruptly cut short by a divorce earlier in his life. We were thrilled to catch up with Nate to talk all about it.

Thank you for talking to us today, Nate, we know how busy you are.

Thank you for asking to speak to me!

We were blown away by ‘Whiskey On You’ when we first heard it. It’s the perfect middle-finger song!

(laughing) I love a good middle finger! What I love so much about that song is that feeling that it gives you when you get to the other side of a heartbreak, you know? That moment when you realise you are over the the hump, from ‘Urgh, I don’t know how I am going to get passed this,’ to ‘I’m over it, man!’ (laughing)

It’s so fun to play live. It’s quite an intense song and very anthemic too. It’s a blast. We save it for pretty much last in the set right now. We play the songs that have been out for longer earlier in the set and then end with ‘Whiskey…..’

Some of the sing-alongs you are getting going with ‘I Don’t Wanna Go to Heaven’ that I’m seeing on Instagram seem like good fun.

For sure!! Big time. I was very shocked by that. I did a show in Denver recently to see if the crowd knew it as a sort of test. It would have been really awkward if no-one had sung back! (laughing)

Your vocals on both songs are awesome. Did you come from a musical family at all? Where does ‘that’ voice come from?

My dad is a singer……………………the worst singer that ever lived!!! (laughing) Nobody is musical in my family, man. He loved it and always had it on but there was no move towards performing it.

I fell in love with listening to music. If you’ve ever seen ‘Home Alone’, the ‘Lost in New York’ one, Kevin McAllister has this ‘Talkboy’ machine, the little recording device, and I had one of those in the 90’s that I used to sing into. That’s kinda where I started singing along to Elvis and Garth Brooks before I got into rock and stuff like Nirvana, who are one of my most favourite bands of all time.

Let’s talk about Tenille Townes, your partner on ‘I Don’t Wanna Go to Heaven’. We love her over here in the UK.

Isn’t she is amazing? She’s got a heart of gold. I was sitting down with the president of my record label for lunch one day and we were chatting and I thought it would be a good idea to make ‘…..Heaven’ into a duet and I suggested Tenille.

He said, ‘why don’t you just go and ask her?’, and I was like, ‘can you?’ (laughing) I cold DM’ed her and she replied and that was it! I got to watch her record her vocals too, which was amazing. She’s such a good singer, so distinctive.

Wasn’t she involved in your Opry debut recently too?

She was. She asked me to come up during her set to sing ‘I Don’t Wanna go to Heaven’ with her because I only got two songs in my set. I was so thankful that she was there on the night I made my debut, she is such a calming influence.

On a scale of 1 to 10 of nerves on your Opry debut, where were you?

45! (laughing) Literally, I was back stage thinking that today was the day I was going to die! I looked at Tenille and she was like, ‘it’s just a stage, it’s like any other stage, you can do it.’

I came back after and said, ‘ You lied to me!’ and she was like, ‘I know, but you did it, right?’ (laughing) As soon as I saw my Mom and Dad and friends out there in the audience I knew it was going to be ok, it was the best night of my life, man! There’s a weight to standing in that circle.

Your backstory is so interesting and I feel like it’s been covered quite well so far (particularly by us in a previous interview with Nate). How is your hometown of Paradise recovering from the 2018 fire now?

I haven’t been back up there yet but it will be a nice surprise when I do because I think the re-build is going well.

My family all moved to Idaho after the fire. It was so random, I’ve got nothing against Idaho but they were like, ‘we’re moving to Idaho’ and I was, ‘why not just stay around where we’ve been all these years?’ (laughing) My dad is northern Idaho, close to Canada and my mom and brother are in Boise and the two places are seven hours apart so when I visit I have to take a plane to get between the two!!!

You came back to Nashville after that, which was the second time you’d tried your hand at music there. What happened in the first try, if you don’t mind me asking?

I’m an open book, you can ask me anything. I had a publishing deal in Nashville, wrote songs for other people, you know, but then I went through a rough divorce, it was hard for both of us. We tried and tried and couldn’t make it work and it left me not in a good place mentally and emotionally and I just needed to to be with my family again. I sort of left Nashville with my tail between my legs and I lost my publishing deal because I left town too.

Did you walk away from music for good for a while back there then?

If I could take you back to when you were in Nashville the first time, back in 2008, and let you give yourself a piece of advice, what would you say to yourself?

(laughing) There’s so much I would say!!! I would say ‘guard your heart, man’. There’s a reason people keep telling you this, you are a loving person but you’re going to get really hurt if you let too many people in that shouldn’t be there.

You were in Nashville in 2008 and now it’s 2022. Have you seen many changes in the town over those years?

Oh, for sure. It’s Vegas now, full time. We used to joke that it was Nashvegas but it’s full on now. People partying on Broadway at all hours of the day!

The writing sessions used to be 10am in the morning and now it’s 11am, which is better! It’s a big city now, it’s grown so much in the past 15 years.

It’s CMAFest in a couple of weeks. You’re playing on the Friday around 4.15pm. Excited?

It’s my first CMAFest! I’m so excited, man, it’s like Christmas for Country music fans in a couple of weeks.

You signed with Sony Music Nashville last year. What’s it like being a ‘major label artist’?

It’s awesome. My management and my team are great. They are so collaborative. I always joke with them that if they were a Yelp review, I would be giving them 5 out of 5 stars! They are the best. I always thought that a label would try and change you or try to dictate to you what you release but I feel like Sony are more about looking to us as leaders and us understanding what our fans want.

Now, the audience decides so many things. The listeners and fans, because of social media, can make their feelings and desire made very clear to both the artists and the labels and Sony listen to that very carefully.

Talking about social media, how beneficial do you find platforms like TikTok?

If you’re not on TikTok, you’re not gonna make it right now. (laughing) That’s where the audience is. Maybe in a few years there will be a new app or a different tool but as an artist, you have to follow the audience and TikTok has helped to shape my life so I think it’s a great tool.

You’ve got a big year ahead. Tours with Brett Eldredge and Larry Fleet. Your own headlining tour and, hopefully, some new music too. What’s the plan?

I’m excited about my first headlining tour, the ‘Whiskey on You’ tour. We start that in Chicago and then we are all over the place

Nate Smith’s ‘Whiskey on You’ is out on all the streaming platforms right now.