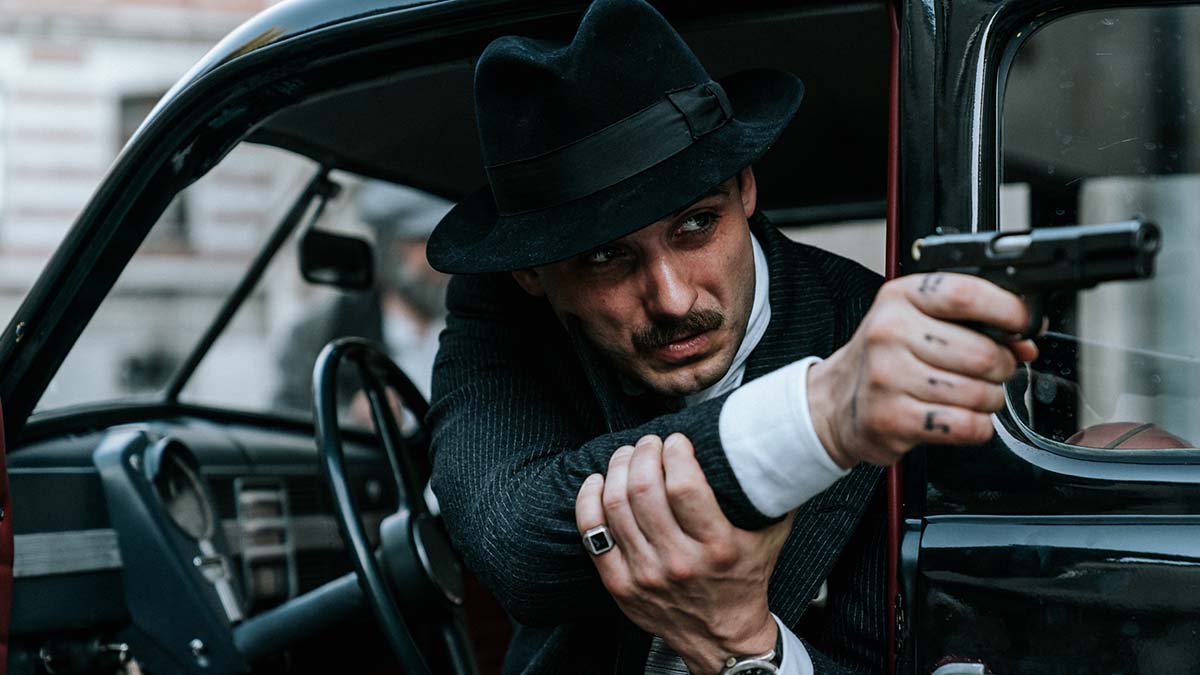 Michal Zurawski is the star of ‘The King of Warsaw’, a fabulous new drama from Walter Presents.

In the show he plays Jakub Szapiro, a boxer and gangster henchman. ‘The King of Warsaw’ has been likened to a Polish ‘Peaky Blinders’, with Michal excelling as the enigmatic Szapiro – a loving family man one minute, a vicious and callous killer the next.

How much fun was it playing Jakub? One minute he’s slitting the throat of some poor shopkeeper; and the next he’s flirting with a beautiful woman; or fighting in the boxing ring. How would you describe Jakub?

He isn’t easy to describe. He is a type of male fantasy; a lot of guys would want to be him. On one hand he is a gangster, which is a dream of many men, on the other – an amazing lover, as he has at least three women in the mix in the show. He always has a lot of money, and he knows how to punch someone in the face. This is very satisfying to watch and to fantasize about. For me as an actor – he is a wish fulfilled!

‘The King of Warsaw’ is based on a book by famous Polish author, Szczepan Twardoch. Had you read the book prior to taking the role? And does the TV series differ much from the original novel?

Szczepan Twardoch is one of my favourite writers, and I have read the book beforehand. In fact, with taking the role it was the other way around – as soon as I read the book, I called my agent and told her to do everything she can to have me invited for an audition if this book ever gets adapted into a film or a TV show. One year later the casting call happened.

There are some differences between the book and the series, some themes got extended, some – cut short. There are a couple of new characters added, who complete the story. Especially the “supporting” gang members, which aren’t well developed in the book, as the book has about three gangsters fully depicted. We needed more – so we had to invent them and add them to the show.

Jakub is – amongst other things – a boxer preparing for his final bout before retirement. You show some impressive moves in the boxing ring – have you ever boxed? Or did you need instruction on how to move and perform in the ring?

I started training as soon as I read the book and fell in love with it. I wanted to look the part. The boxers back then didn’t look like the ones we see today; big and bulky, fed with supplements. Their supplements were milk and honey! I managed to “get the look”, and also was lucky enough to train in this more vintage style of boxing. Boxing itself was different back then, and I had to learn it.

The set design and locations selected for ‘The King of Warsaw’ are stunning – wonderfully portraying how I imagine 1930s Warsaw looked. Was it actually shot in Warsaw, or elsewhere?

Most of the interiors were shot in Warsaw, but the streets you see in the show are the streets of Łódź. Warsaw was completely destroyed during the war, and rebuilding it afterwards meant reinventing. We didn’t rebuild it the way it was before. In the pre-war era Warsaw was often called “the Paris of the north”, and you can easily understand why, when looking at the old photographs. After the war it became more influenced by soviet Russia, by the socialist style of design. The Warsaw from the show doesn’t exist anymore. The Karcelak, the pre-war Wola district – are long gone.

You have also played Commissioner Adam Kruk in ‘Raven’ (‘Kruk’ in Poland) and Tomek in ‘Ultraviolet’ – both crime shows. Do you find yourself drawn to roles in thrillers and crime shows?

It is true that I often get invited to auditions for these types of parts. The producers seem to think that I work well in a crime drama or a thriller. It might be due to my height – I am 6′ 3″ and I am also a big guy with a low voice.

What next for you? Can you let us into any secrets about future projects? Will there be a second season of ‘The King of Warsaw’?

It is hard to say if the second season of ‘The King of Warsaw’ is on the cards, as the second book – ‘The Kingdom’ – is much less cinematic. It has a different style to it, is more dreamlike. As to my plans, I am just about to start filming the third season of ‘Raven’. It will be the final season, completing the trilogy. And I also start filming a new TV show with Borys Lankosz, it is a Dutch licenced show, a story of a marriage.

Congratulations again on your performance in ‘The King Of Warsaw’ – it’s a hugely watchable and enjoyable series.

Thank you once more and to the audience – enjoy the show!

Walter Presents: ‘The King of Warsaw’ will premiere on Channel 4 on 15th May 2022 at 11pm. The full box-set is available on Walter Presents via All 4 now.

In this article:Featured, Michal Zurawski, The King of Warsaw, Walter Presents