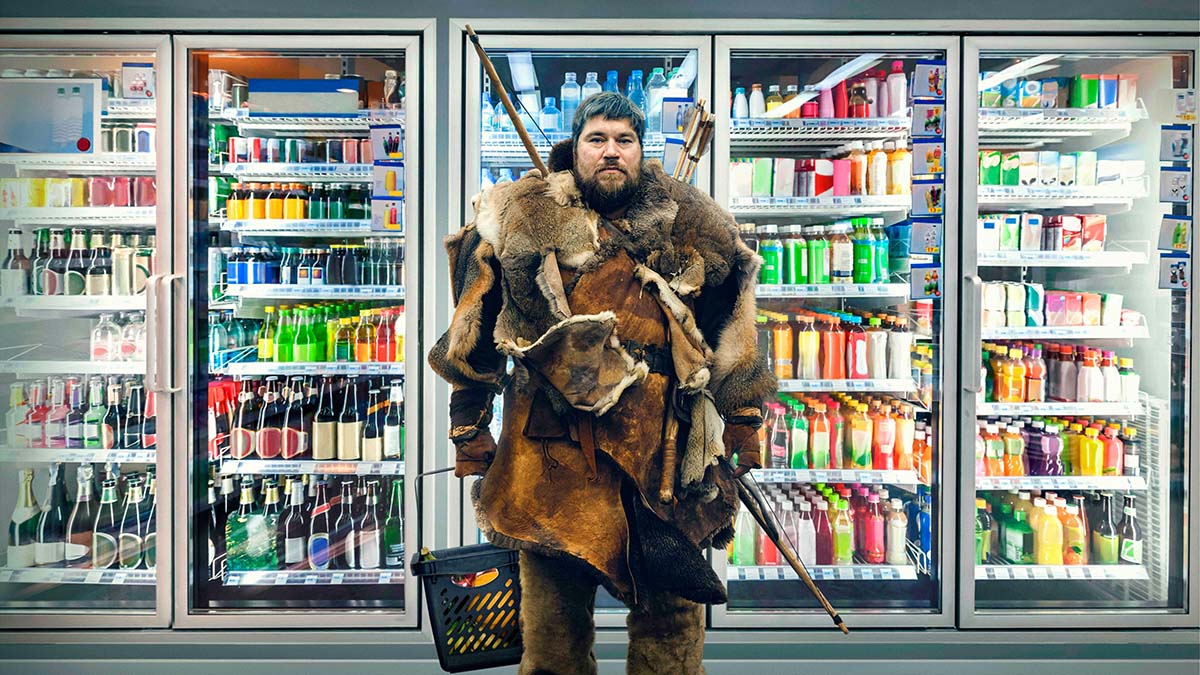 What do you do if you’re a typical man experiencing a mid-life crisis? According to Wikipedia, the “cultural stereotype of a man going through a midlife crisis includes the purchase of a luxury item such as an exotic car; or seeking intimacy with a younger woman”. One option they fail to consider is dressing up as a Viking and living off the land in a remote part of Norway. For that is the plot of this wonderful comedy film, ‘Wild Men’, from director Thomas Daneskov and written by Daneskov and Morten Pape.

Martin (Rasmus Bjerg) is Danish. He has left his home and wife, Anne (played by Sofie Gråbøl, best known for the quintessential Nordic Noir show, ‘The Killing’) and is making a valiant – but doomed – attempt at being a hunter/gatherer in the Norwegian wilderness. Dressed in furs and resembling the wild man of the title, he certainly looks the part. But his hunting skills are sadly inept; he has to resort to stealing food and drink from a local Shell service station.

Meanwhile, three drug dealers are driving through the same wilderness with a bag full of cash to exchange for drugs, when their car hits an elk and crashes. Musa (Zaki Youssef) escapes the car with the money but has sustained a terrible injury to his leg. When he passes out in the forest, Martin finds him and tends to his injuries. What follows is a bro-mance of sorts between these two hapless individuals, neither of whom starts off being entirely truthful to the other about their motivations.

The unlikely modern-day Odd Couple go on the run from the police, Martin’s wife and Musa’s drug-dealing colleagues. Then they find themselves in an “authentic Viking experience” camp, where Martin had hoped to find like-minded souls. But he’s disappointed to find electric cars, i-phones and payments by Mastercard and Visa – none of it in the least bit authentic.

Eventually the police and Anne catch up with them, and there follows a frantic shoot out as a grand finale. Do our flawed heroes ride off like a male Thelma and Louise? You’ll have to wait and see.

Martin is eminently likable, despite his flaws. He’s a good man at heart who has succumbed to the pressures and stresses of modern-day life. He loves his wife and family, but hates that his life has become so mundane and predictable. He just wants to escape the drudgery.

Bjerg’s performance is sublime. He doesn’t over-egg the comedic element, so it never transcends into farce. He’s entirely believable as a man pushed over the edge by the pressures of life in the 21st century.

Credit too to Bjørn Sundquist, who plays Øyvind – the near-retirement police officer who is burdened by some hopeless colleagues and is still mourning the loss of his wife. He puts in a wonderful performance.