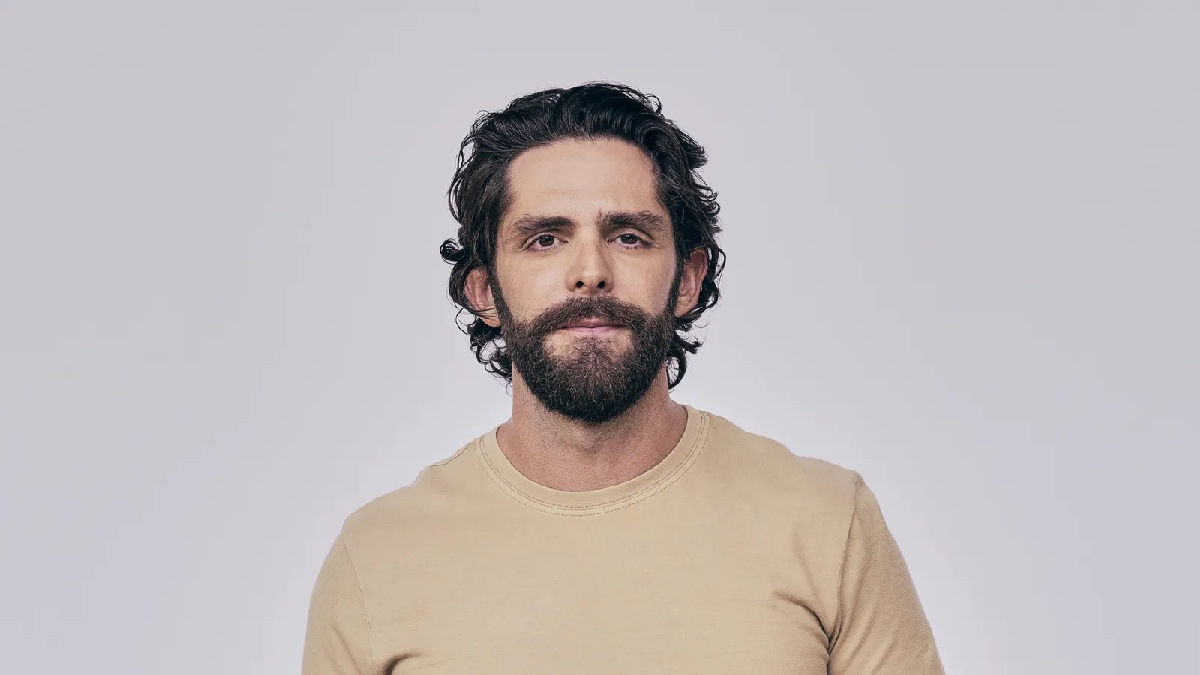 Thomas Rhett releases his new album, ‘Where We Started’ on April 1st.

Hot on the heels of last year’s stripped back, organic-sounding ‘Country Again’ project, ‘Where We Started’ will position TR front and centre in the Country world as an artist of real worth with its meaningful lyrics and catchy, infectious melodies.

It’s his sixth album and it really demonstrates an artist at the height of his creative peak. We were thrilled to catch up with him to talk all about it.

Great to speak to you today, Thomas, we know you are a busy guy so thank you for your time.

No, thank you for your time. I appreciate your interest.

When we spoke last, just before the release of ‘Country Again Side A’, there was going to be a ‘Side B’ and now here we are with ‘Where We Started’ so what caused the change of plans?

The main factor was me getting back out on the road to be honest. ‘Side A’ was written in my studio at home during the pandemic. We were living fairly isolated and the last thing I was thinking about was going out or partying with my friends and that was the record that came out of that. As we started to work on ‘Side B’ we also started going back out on the road a little bit and some stuff shifted in my head as to what I wanted to do next.

Our live shows tend to be very high-energy shows and the songs I was making for ‘Side B’ didn’t really fit that. I thought we were done writing but I went back in to write some more. Lots of songs hit me and the next thing you know we have 50 or 60 songs that didn’t really represent what I wanted ‘Side B’ to sound like. A whole other album began to emerge.

The three watch-words we take from listening to ‘Where We Started’ are ‘simplicity’, ‘restraint’ and ‘melody’. What was your mission statement when making the album? You’ve stripped some production back without losing any of the melodies and vibes you are known for.

Yeah, for sure, man. I need to start talking to you before all my interviews because you seem to have a better grasp on what my music is than even I do! (laughing)

Simplicity was a by-product of the last two years for me. It’s almost like I cleaned my closet out making these last two albums, my heart closet and my soul closet, you know? I de-cluttered my life a little bit and started to enjoy the simplicity that that brought.

I realised that, musically, I didn’t have to keep being different just for the sake of being different. If a song naturally emerges, let’s go there! There are some pretty funky tracks on ‘Where We Started’ but the majority of the record is pretty raw. We decided to use some different instrumentation on this record, string sections to begin songs, for example. ‘I wanted ‘Us Someday’ to feel like ‘Elenor Rigby’ from the Beatles, you know? Little minor tweaks like that are what make this record different from ‘Country Again’. Lyrically, it’s pretty on brand but the production was more ambitious.

It’s just not in my DNA to keep making the same record over and over again.

Picking up on ‘Us Someday’ – one of your co-writers was Amy Wadge (English songwriter) so does that explain the ‘Bridgerton’ style string opening?

(laughing) Man, she was the perfect human to write that song with. Anytime I write with Amy we always get something worth the world hearing.

You’ve got seven songs on the album co-written with Ashley Gorley. Tell me what he brings to the table for you as a writer that you like so much.

I think one of Ashley’s greatest strengths is that he is a quick writer. Sometimes quick is bad, obviously, but he’s good at taking all of my ideas and trying them all with me. With other writers that could take two weeks but we can do that in one day.

As a writer I usually go into a room with the mentality that whatever we write today will probably not end up being a cut. You have to be prepared for the artist you are writing with to throw a curveball, like, ‘I’ve been listening to a bunch of Kendrick Lamar this week and I want to write a song like that,’ you know? The writers have to be prepared to go there with you at first and then maybe write what you really came there to write after that and Ashley is really great at doing that.

The only song on ‘Where We Started’ you didn’t write is front and centre, lead track, ‘The Hill’. What a beautiful song that is. I can imagine you must have felt the same when you first heard it?

Yeah, I did. Literally the night before I got sent that song my wife and I had had a tiff in the kitchen about the dishes! (laughing) It was 9.30pm at night, we were trying to go to bed and Lauren is a sucker for a clean kitchen! (laughing) It was my duty that night and I’d procrastinated on it. I woke up in the morning to a text from my buddy Jordan Reynolds who’d written the song with Emily Weisband and Lori McKenna. It felt like the song was sent to me just at the right time and when I heard the lyrics I felt like I’d been in the room with them when they wrote it.

It helps that I also knew all the co-writers well. Every line of that song was my ‘yesterday’, you know? I usually like to open an album with a banger but this song, I felt, really sets the tone for the emotional rollercoaster you are just about to go on! (laughing)

‘Bring the Bar’ could be a Barry Manilow song with a slight twist in production. That will be a great live song.

I think so too, man. I wrote that song and ‘What’s Your Country Song’ back-to-back on the same day. I was in a hotel room in Dallas, which makes no real sense when you listen to both of those songs!! (laughing)

‘Bring the Bar’ was a by-product of us feeling like we had just written a smash and then relaxing a little and wanting to have a little fun. That was the beauty of having co-writers because they helped to meld the Justin Bieber style-sound that was popular at the time into something more recognisable in Country music.

‘Half of Me’ sounds like it could be a really big radio song. Do you still think a lot about radio or are you more invested in making great albums nowadays?

I definitely do because you never know who is listening to the radio. My brother is 16 and I don’t know if he listens to the radio regularly but every now and again he does and he might stumble across something that blows his mind. When I began my career all we had was Country radio, so maybe I’m still old school, I don’t know, but if you weren’t on the radio, no-one was hearing your songs.

‘Half of Me’ has the perfect mix of being really fun and having a lot of hit qualities about it. It also has my buddy, Riley Green, on it too. I do think that song will perform really well on the radio.

There’s a whole lot of ‘summer vibes’ going on on ‘Where We Started’. I wasn’t expecting that at all.

Me either, to be honest with you! (laughing) I think ‘Country Again’ was 100% the most cohesive album I’ve ever made and it was a moment in time we really captured but we wanted a different feel on ‘Where We Started’. ‘Anything Cold’ was literally written standing in the ocean with two songwriter buddies! I went to get a drink from the beach and I yelled back, ‘Does anyone want anything?’ and Jesse Frasure shouted back, ‘Anything cold, with alcohol!’ and we stood in the ocean and wrote that song. (laughing)

‘Paradise’ came next and then ‘Somebody Like Me’ and the next thing you know we have five or six summer jams on our hands. We also seemed to get three or four 50’s throwback jams too. I wrote what I was living through that year.

Let’s touch on one of those 50’s throwback songs. Is that Doris Day you are sampling on ‘Simple as a Song’?

Yeah! Man, my grandmother is a die-hard lover of 50’s Doo-Wop music. We would do the ‘twist’ together and listen to Elvis, you know? I’ve always had such a special place in my heart for the 1950’s because of my grandparents. Every time me and Lauren cook we pull up this playlist called ‘The Best of the 50’s’, there’s just something special about making spaghetti and listening to Doris Day!

I was writing with Luke Laird and Josh Thompson one day and it was Luke who was responsible for helping to write the mash up that Sam Hunt did on ‘Hard to Forget’, which I really liked. I asked him how easy was that to do and he said all he had to do was sample it and put a beat under it. I played him the Doris Day song and he just went for it! Before you know it we wrote the song and it was the only song we played all last summer at the pool, it just put such a smile on our faces. I really just put that one on the album for me but if someone else happens to like it then that’s great.

Are we due to see you out on tour in the UK anytime soon or will you be focusing on the USA for a while yet?

We’re in the States this year, for sure, but I think 2023 will be the year we go back internationally. We always have such a blast coming over and playing for you guys so rest assured it will be in the works for next year.

Thomas Rhett’s ‘Where We Started’ is released on Friday 1st April 2022. Pre-order a signed copy now.

In this article:Featured, Thomas Rhett